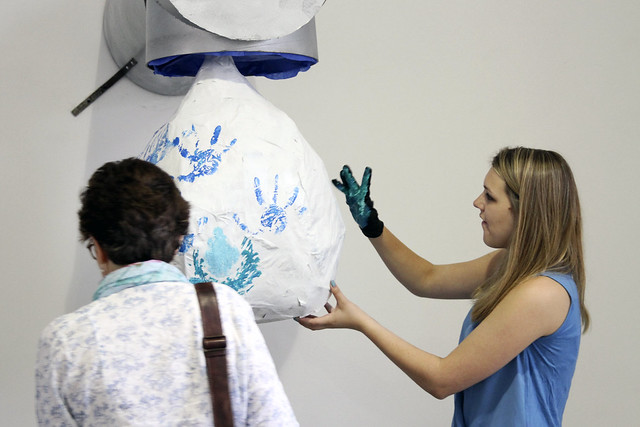 On Feb. 23, the Engineers Without Borders student chapter hosted “Water: A Medium for Life” which featured work from the Department of Art and Design.

The exhibit, which pulled in a diverse crowd of students and professionals, aimed to draw attention to the EWB’s clean, sustainable water resource projects, and the Art Ambassadors whose pieces reflected imagery from said efforts.

Hosted in Taylor Hall, the exhibit featured various mediums of artwork from paintings and photography to a large papier-mâché raindrop which visitors could leave their handprint on. The artwork, coupled with refreshments and live music, led to a lively event. Many of the pieces received bids within the first hour.

“I think that it’s really neat that you get to auction off all of these people’s artwork, and half of the money goes to Engineers Without Borders,” Scott Walls, a freshman chemical engineering major, said.

The Engineers Without Borders (EWB) student chapter has been working closely with the Sakata region of Malawi and Ubujan, Philippines to provide potable water sources and sanitation infrastructures. Previously, the group worked in Cameroon to create a solar-powered water supply, as well as in Guatemala on a bridge-building project.

Sarah Hartman, an environmental engineering major and the current president of EWB, was at the center of the exhibit’s organization. When asked what she hoped visitors would take away from the art, Hartman said, “I would love for them to have an appreciation for the types of projects that we do, and their importance in the world.”

This message seemed to translate well for visitors such as Ronald Purnell, a first-year marketing major who asserted that the art world has a lot of potential power when it came to fixing environmental issues.

“The reason I think this exhibit is important is because through the expression of art you can basically bring people awareness,” he said.

“This can get more people to fight the good fight,” he said.

The coupling of engineering and art reached new audiences through applicable mediums, which was exactly what the EWB hoped to achieve, its president said.

“There’s this stigma that engineers without borders is only for engineers,” Hartman said. “It’s something that we are trying to combat because so much of our projects goes beyond engineering.”