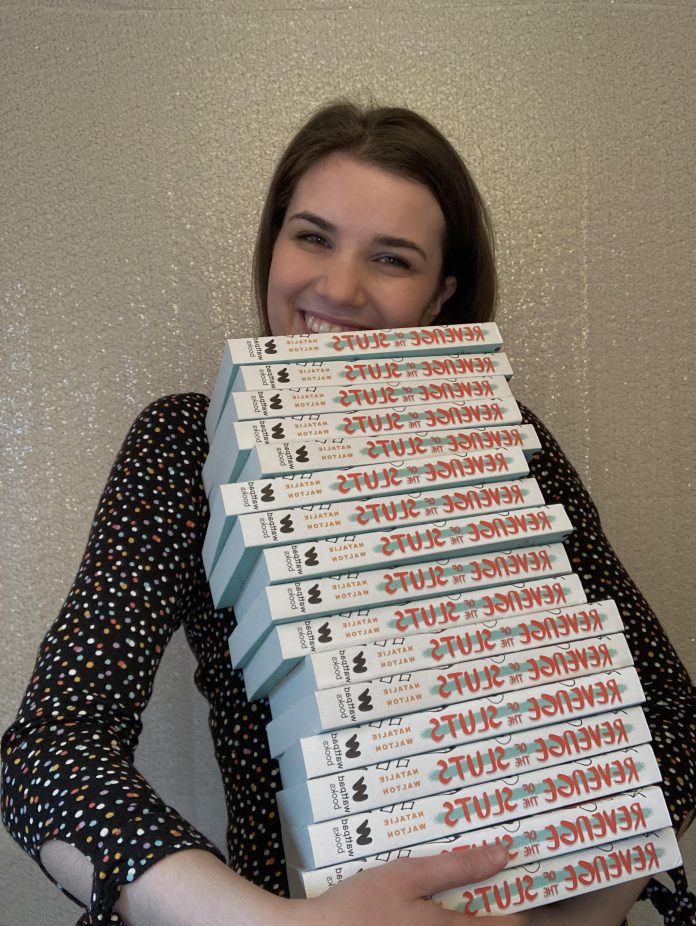 Natalie Walton, university alumna and author of “Revenge of the Sluts,” wrote her book during her sophomore year while working towards her sociology and criminal justice degrees. Her debut novel combines her interest and existing work in the social sciences and her long-time creative outlet of writing. However, it didn’t truly start there but long before that.

This unusual situation stuck with her. Having the feeling of missing something and being incredibly aware that there’s something the adults intentionally weren’t telling them was a major inspiration for her book.

Walton’s book “Revenge of the Sluts” follows student journalist Eden Jeong, as she covers a groundbreaking story for her high school newspaper. After a mass email was sent to the entire student body of St. Joe’s that contained sexually explicit images of seven senior girls, the Editor-in-Chief of the school newspaper and Eden’s friend, Ronnie, puts Eden in charge of covering the story. With the help of the girls and the newspaper staff, Eden works to uncover who is responsible for the collection and distribution of these images under the alias of Eros.

While Walton started the book in fall of 2017 and had finished the first manuscript by that next summer, the story evolved a lot during the writing and publishing process.

“Having a new idea is really exciting but having to set a concrete book and being like ‘yes, this is it,’ and figuring out the plot… the writing process is so much,” Walton says.

Every character individually transformed somehow throughout the story’s evolution over the years as well. Sloane, however, was the only character who stayed true to the original plans for the book.

Sloane Mayer is one of the senior girls who was exposed in the email. She is known throughout the school for her looks and her confidence in herself and her sexuality. As the story develops, Sloane becomes the face of this scandal.

“I had such a clear picture of her from the very beginning because I think in a lot of ways the book is about her,” Walton says. “It’s from Eden’s perspective, but I think she’s such a huge driving force of the story and such an interesting part of it.”

Since her graduation last spring and the release of “Revenge of the Sluts” on February 2nd, Walton has been hard at work on multiple manuscripts and other projects as well. She hopes to keep writing fiction, and the fiction that she finds the most interesting and satisfying is when it’s rooted in some social concept.

“I think for the entirety of my career will be spent figuring out how to balance writing and social science and trying to find a way to be both an author and a social scientist,” she says. “I can’t imagine having one or the other. For me, I want to have both and I want to do anything I can to have both.”

Advocating for and discussing sex ed are very personal to her and she intends to keep doing that as well. Her virtual book tour for “Revenge of the Sluts” includes sex ed expert, Shafia Zaloom. Zaloom’s career is centered around her teaching about sex and sex ed.

“I’ve been learning so much from her, and it’s really, really wonderful,” Walton says. “I’m hoping I can continue on that path.”

She sees the book as almost an apology for the way we follow the norms that we’re taught growing up and how we’ve all said things that we probably didn’t mean. Walton had a lot of personal growth with this while writing the story.

“It was about having that honest conversation with myself about what I allowed to perpetuate or things where I perpetuated it myself,” she says.

What the theme of the book and everything she was learning through the process came down to was the understanding that we need better sex ed. When she was in the early stages of writing, she didn’t see that. However, throughout the writing process, she realized that the point of the book was realizing the lack of education on these things and that there should be better intervention at a younger age.

Walton has no concrete plans for the future other than to keep writing young adult fiction, advocating for sex ed and attending graduate school in the near future. To her, sticking to the young adult fiction genre makes sense given her interests and where she’s most comfortable.

“A lot of the stuff that I want to do and the stuff I want to write about are things that I think are relevant for young adult audiences and really important to spark those conversations,” Walton says.

As an increased amount of research and societal developments arise, “Revenge of the Sluts” reinforces the necessity of this ever-growing conversation surrounding sex education, sexual assault and sexual harassment. I look forward to seeing what social topics Walton incorporates into her next project and how her work continues to add to the conversation.