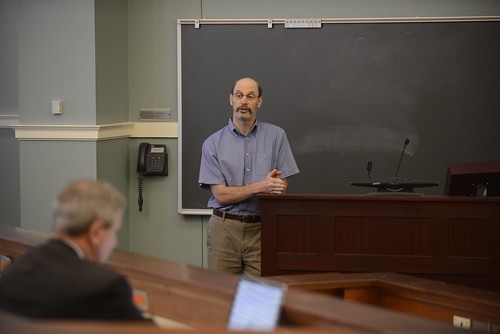 Michael Chajes, chair of the commission, said the final set of recommendations will be presented by end of the year.

The Faculty Senate had its most productive day in recent memory on Monday, trudging its way through 12 resolutions during a two-and-a-half hour marathon session.

In addition to the unusually high number of resolutions, the group also heard presentations on the progress of the #VoicesOfUDel campaign, the Commission on Sexual Harassment and Sexual Assault and the cybersecurity initiative. Citing the packed agenda, the Faculty Senate decided to punt the hotly debated General Education reform proposals discussion until an open hearing next Monday in Purnell Hall.

The presentation by the Commission of Sexual Harassment and Sexual Assault, led by civil engineering professor Michael Chajes, consisted of a recap of the commission’s last few months’ activities, as well as several preliminary recommendations they can offer to the senate so far.

Chajes said one of the obstacles the commission has begun to work to resolve is the laws of the state of Delaware, which base their sexual assault proceedings on the “beyond a reasonable doubt” principle, while the school uses affirmed consent and preponderance of evidence as their sexual misconduct base procedures. This difference creates a damaging duality, Chajes said, which can result in an offender being found guilty by the university but not by the state’s judicial system.

Chajes said though a final set of recommendations will be presented before the end of the school year, the commission’s work so far shows that more clarity is needed regarding consensual student-professor relationships, along with peer education and specific engagement of Greek life and athletics.

Chajes also suggested the establishment of a 3-digit phone number to facilitate faster sexual misconduct reporting. Cultural change was also a main focus of Chajes’ presentation, who showed slides of popular move-in weekend signage such as “BEER 4 DAUGHTERS.” Provost Domenico Grasso said the university has begun to work with the mayor and the Newark Zoning Committee because such signs violate city zoning laws.

Chajes said support for sexual assault policies from top leadership is crucial to working to solve the problem.

“We need to keep saying that this is a community where we treat people with respect,” Chajes said. “These are issues we want to talk about continuously both in the classroom and out of the classroom.”

Resolutions that were passed included the introduction of new majors in meteorology and climatology, linguistics and French, and a master of science program in cybersecurity. The Senate also disestablished the agriculture education bachelor’s program, along with two master’s degree programs, instruction and arts in teaching.

Debate erupted twice during resolution voting, once when deciding to rename the Foreign Language and Literature department as the Language, Literature and Cultures department. Despite the fervent objections of the anthropology department and an in-depth discussion of whether a department name represented ownership of a subject area, the motion for the renaming passed.

Tensions also escalated between Dean of the College of Engineering Babatunde Ogunnaike and biology professor Deni Galileo during a debate on the permanent approval of the biomedical engineering program, which had been temporarily accepted in 2010 on a five-year trial. Galileo contended that while he supported the program, the budget had not been approved by the Senate’s budget committee. Galileo said such oversight is needed in order to prevent accounting failures, while Ogunnaike objected to the perceived interference into his college’s operation.

The program was eventually passed.

The Senate will meet again the first week of May, when Chajes’ commission is expected to present their final findings.