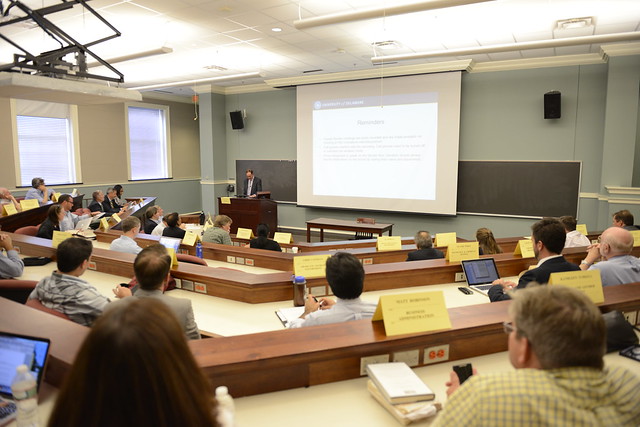 After addressing the controversy surrounding Yiannopoulos’ planned visit to campus later this month, Provost Grasso shared President Dennis Assanis’ plan and went on to discuss his proposal to augment the size of the class of 2021.

Next year, President Assanis said he wants to increase acceptance by 1,000 to increase the freshman class to his goal of 4,200 students. He is working with the different deans and department chairs to make this happen. While he aims to increase the class size, he does not want to sacrifice the quality of education at the university.

Dean of Students José-Luis Riera and Director of the Office of Equity and Inclusion (OEI) Susan Groff later presented resolutions for addressing discriminatory acts on campus.

If a student encounters a bias incident, or an event dealing with racism or homophobia, there is currently no legitimate place for a student to report their incident besides the Office of the Dean of Students or university police.

Riera and Groff are making advances so that this will not be the case for next year. They both report that many students discussed not knowing where to report bias-based incidents.

Riera’s goal is to make the policy mirror the sexual misconduct policy in its process so there is a consistency in addressing all forms of discrimination, a single office would be in charge of informal and formal discrimination cases. They will follow a Case Advisory Board Model, meaning they will make sure students are aware of their rights, resources and options.

“An informal case would involve the Office of Equity and Inclusion with various constituents depending on involved parties to resolve complaints,” Groff said.

A formal complaint would require the OEI to conduct an investigation, which would be similar to the current sexual misconduct case process.

Groff and Riera said they do not see it appropriate time to implement a Bias Response Team. However, they plan to remove the Stop Hate webpage students currently have access to in order to ensure all the information and materials are up to date and on the OEI website instead. They want to make sure this new policy aligns with “guiding principles for action… building a community and improving campus climate at UD” — all aspects they feel need to be integrated into the campus culture.

The next steps include a vetting process which will involve Faculty Senate, students, human resources staff, the university president and the executive committee for approval and adoption. Their goal is to have this implemented and effective by July 1.

The university also is starting to finalize their changes to the General Education Update, a plan that the faculty started back in Nov. 2014 when they initially passed the resolution. In April 2015 they created a General Education task force. Christopher Knight, the General Education committee chairperson, updated the faculty on the final steps they need to take. The First Year Seminar (FYS) classes and multicultural course requirement need to be re-certified as part of the new course proposal process, along with any newly-proposed versions of theses classes.

Capstone requirements have also changed. Previously, the capstone acted as a suggestion whereas now, there are specific criteria for capstone course certification. Beginning with the incoming freshmen in fall 2017, all students will need to fulfill a capstone requirement.

Last spring, the faculty were asked to provide information about how their courses mapped to the new general education objectives and their college objectives. The faculty deadline for course reviews is Dec. 1. All faculty are being required to submit their courses for screening or rescreening.