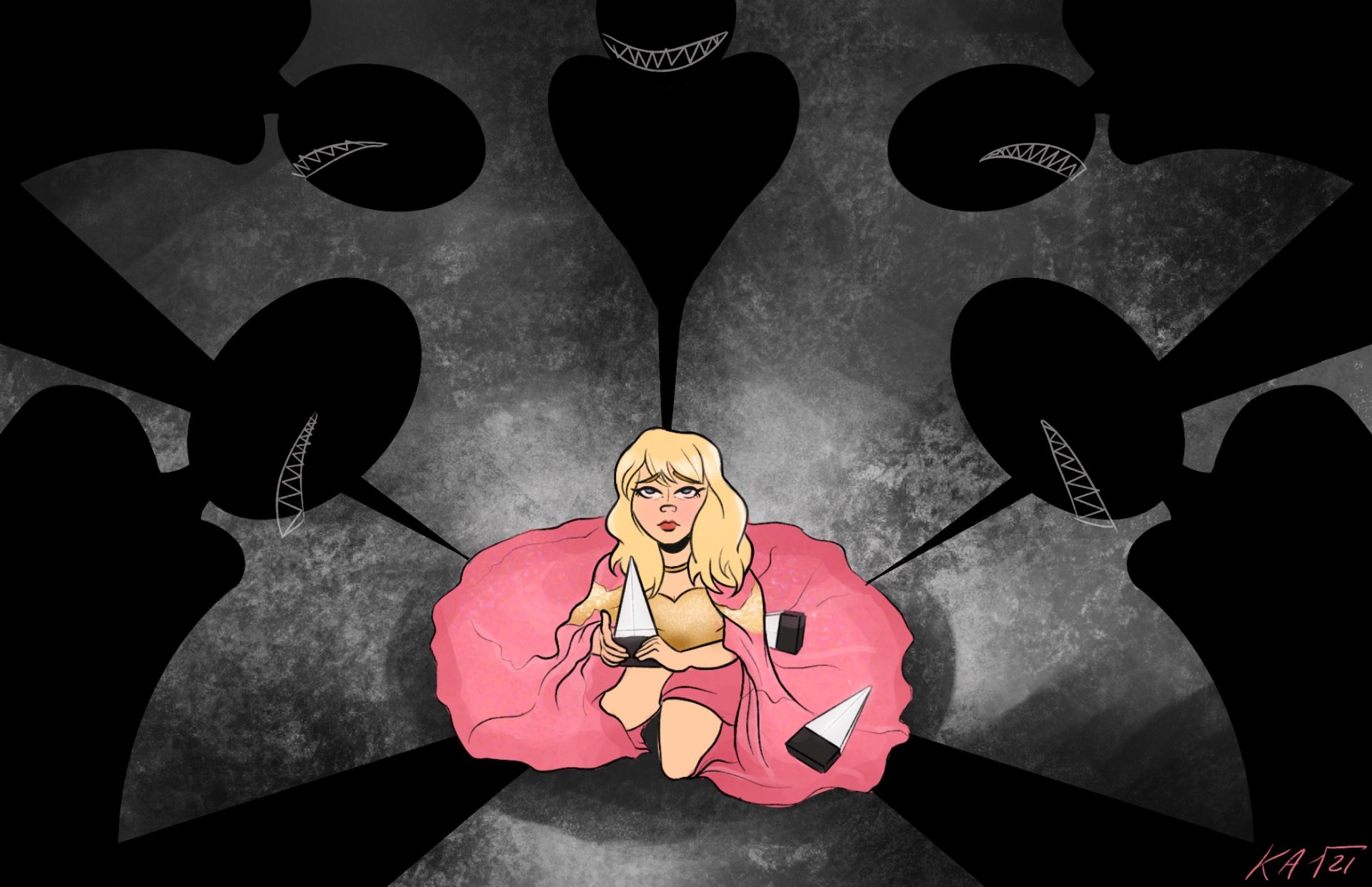 When teenage girls experience heartbreak, they often take to journals, diaries and their friends to cope with the seemingly life-shattering feelings associated with the ending of a young relationship. Those coping mechanisms tend to differ a bit when you are an international pop star. When her heart was broken, Taylor Swift took pen to paper and crafted chart-topping songs about her experiences.

Since the beginning of Swift’s 15-year career, the subject matter of her songs has led to an abundance of criticism. She has been branded with the notion that all she does is write songs about her ex-boyfriends. Many songwriters draw inspiration from their past relationships, yet Taylor Swift  is one of the few publicly ridiculed for doing so.

When one’s career spans more than a decade, the media tends to perpetuate a number of different narratives. Around July 2017, it became an almost universal trend to hate Swift. This overwhelming hatred began almost as a direct result of a Snapchat video posted by Kim Kardashian West, the wife of Kanye West.

West and Swift have had a less than pleasant relationship through the years, since West interrupted Swift’s 2009 acceptance speech at the Video Music Awards after she won Best Video by a Female Artist.

In Kardashian West’s Snapchat video, West and Swift were talking on the phone about lyrics in West’s song, “Famous”. This conversation occurred prior to West’s release of the song as he was checking with Swift about using her name in the song. However once the song was dropped, Swift’s publicist spoke out that they felt the song was offensive.

The whole situation turned into a large-scale he-said-she-said and many started to distrust Swift. She then took to social media to clarify her side of the story that was not detailed in the recording Kardashian West  posted. Swift specified that her issue with the lyrics was not the message, rather the misogynistic profanity used to describe her that the pair did not agree upon.

“I feel like me and Taylor might still have sex/ Why? I made that b—- famous,” West says in “Famous”.

After this public battle, many sided with West. Kardashian West even dubbed Swift a “snake” in a subtweet on social media. Male celebrities in similar situations are commonly dubbed “cunning” or “smart,” yet Swift’s reputation was smeared by almost every media outlet, from People Magazine to USA Today.

Furthermore, the notion that West made Swift famous that he details in his song is nonsensical. Swift won a plethora of American Music Awards, Country Music Awards and Teen Choice Awards long before West’s interruption. She was famous on her own merit prior to West’s disruption.

This entire situation inspired Swift to completely take charge of the narrative and image surrounding her in the media. This marked the dawn of Swift’s Reputation era, entitled after her album released in Nov. 2017. This new age began with Swift  deleting everything off her social media accounts and only sharing mysterious posts often featuring snakes, a slight to Kardashian’s previous comment. She also refused to do any interviews for the first time since her entrance onto the scene.

Her Reputation era was the first time in Swift’s career where she completely ditched the good girl image she so vehemently clinged onto and tried to preserve. She leaned into the version of herself that the media created and profited off of it. Swift’s Reputation Stadium Tour was historic. It remains the highest grossing U.S. tour, bringing in $266.1 million.

Fed up with the constant ridicule faced purely because she was a woman with a public dating life, Swift  released “The Man” on her album “Lover” in Aug. 2019. This song details the struggles that Swift faced throughout the entirety of her career and how differently she would be portrayed in the media if she was a man. The tone of the song shows her clear frustration that male celebrities are not judged for their numerous relationships while she has yet to escape that image.

“I’m so sick of running as fast as I can/ Wondering if I’d get there quicker if I was a man,” Swift says in “The Man.”

In this same feminism-driven period of her work, “Miss Americana,” a Netflix documentary detailing Swift’s fight with misogyny throughout the recent years of her career, was released on Jan. 31, 2020.

An extremely powerful scene within the documentary is when Swift is having a conversation with her father, Scott Swift, and her team of predominantly men about why she needed to denounce Republican incumbent Marsha Blackburn in the 2018 midterm elections.

Through tears, Swift pleads with her father because he believes that she should continue her silence from the 2016 presidential election and stay out of politics.

“I’m saying right now that this is something I know is right and, you guys, I need to be on the right side of history,” Swift says.

Like women are treated in many important conversations in society, Swift was consistently being interrupted by the men she was speaking with. When they finally stopped speaking over her, Swift details that Blackburn has voted against fair pay for women and the Violence Against Women Act, two causes that are very important to a sexual assault and stalking victim like herself.

Swift decided to break her previous pattern of political radio silence due to her own sexual assault, something that unfortunately affects one-sixth of American women. As detailed within “Miss Americana,” a radio DJ, David Mueller, groped her at a meet and greet in 2013.

Mueller attempted to sue Swift for $3 million in 2015, citing that her accusations were false and cost him his job. Swift then famously countersued for sexual assault. In Aug. 2017, the jury sided with Swift and she was awarded the symbolic $1 that made headlines worldwide.

“You don’t feel a sense of any victory when you win, because the process is so dehumanizing,” Swift said, following the decision. “This is with seven witnesses and a photo. What happens when you get raped, and it’s your word against his?”

This court case shows that no matter how powerful, successful or strong a woman is, they can still fall victim to sexual assault and feel like they’re a shell of who they were because someone felt entitled to their body.

The systemic sexism and misogyny that Swift faces often overshadows her abundance of historical accolades and accomplishments. The media more frequently tends to paint Swift as the clingy, crazy ex-girlfriend rather than the consistent award-winner that she is. For instance, Swift won the American Music Awards’ Artist of the Decade award in 2019. She sold more albums than any other artist in the 2010s, yet these facts are often forgotten.

The fight for a voice in the music industry unfortunately did not stop for Swift, even after she gained monumental popularity. In Jun. 2019, the Big Machine Label Group, Swift’s record company, was bought by Scooter Braun and his company, Ithaca Holdings. The master recordings of the six albums Swift had released at the time of the sale were now owned by Braun.

When one owns the rights to a master recording, they are able to sell and distribute copies, and anyone who wants to use the recordings must get permission from the owner, which in this case is Braun. This would not pose such a large problem for Swift if it was not for her past with Braun.

Braun was Kanye West’s manager at the time of their infamous 2017 fight that severely affected her career and image in the media. Swift has publicly stated that Braun has continuously bullied her after this situation.

“Essentially, my musical legacy is about to lie in the hands of someone who tried to dismantle it,” says Swift. “Never in my worst nightmares did I imagine the buyer would be Scooter.”

However, in Nov. 2020, the clause in her Big Machine contract relating to re-recordings expired. As of that date, Swift was free to re-record all of her old music, and she has begun to do just that.

On Feb. 11, 2020, Swift announced that she will be releasing the re-recording of her 2008 album, Fearless, including six unreleased songs. Although a small victory in the fight for the rights to most of her previous albums, it is a step in the right direction for Swift to take some power back in an unfortunate situation.

Taylor Swift’s entire career has been plagued with sexism in a multitude of ways. From her constant criticism in the media and sexual assault to the loss of rights to songs she wrote and fighting to use her voice to speak up about politics, Swift has endured systemic misogyny since her emergence in the music industry.

Drawing inspiration from situations in her own life, Swift has turned into a vocal feminist icon fighting for women’s place in all areas of the industry and the world.

“I do not need some guy around in order to get inspiration, in order to make a great record, in order to live my life, in order to feel OK about myself,” Swift says. “And I wanted to show my fans the same thing.”