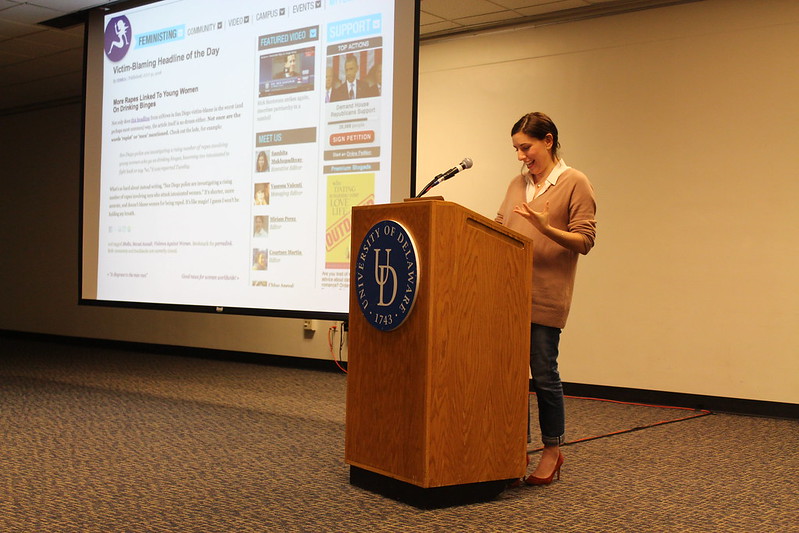 Devin Varca/THE REVIEW
Valenti, whose works include “The Purity Myth” and “Full Frontal Feminism,” was brought to campus by the Sexual Assault Prevention and Education (SAPE) committee.

Shifting the approach in targeting rape from a reactionary one to a more proactive method, according to Jessica Valenti, will make all the difference when trying to change the way we handle rape culture in the United States.

Valenti, a nationally-acclaimed feminist and journalist, visited campus Wednesday night to give a talk titled “Yes Means Yes,” in which she explained how feminist views and ideologies are necessary to enact a change across the country.

Valenti’s appearance on campus comes shortly after the university’s sexual misconduct student survey returned disappointing results. Ninety percent of survey respondents who were victimized reported they did not use university resources.

Sophomore Caitlin Abrams, a victim advocate for Sexual Offense Support (S.O.S.), said she was not surprised by the results of the survey. Abrams said it is hard for students to utilize her as a resource, because the conversation regarding sexual assault is still an uncomfortable one.

“There needs to be a bigger conversation, a bigger ‘official’ conversation,” Abrams said. “About it [sexual assault] being a problem, so that we can talk about how to correct it, and how to remedy some of the immediate implications of it.”

Valenti emphasized that rape is not something that affects only a handful of women, but quite a large number of female students on college campuses.

“According to the CDC, [approximately] 20 percent of college women are victims of rape, or attempted rape, over the course of their schooling,” Valenti said. “We also know that the more marginalized a person is, the more likely they are to be attacked.”

Valenti said she believes the absence of a widely understood and culturally-accepted definition of rape is a hurdle that needs to be tackled in order to help tear down rape culture across the country.

“Knowing rape is wrong doesn’t mean anything, if you don’t know and understand what rape is,” Valenti said.

Valenti also said that in order for things to change on campus, a movement must start with the students and work its way up. Students know what their campus needs most, she said.

Abrams said she agreed with Valenti, and that hearing questions posed to the lecturer after the speech made her realize that there are students out there who want to help, but don’t know how.

“There are students on campus that aren’t advocates that are interested in working on this issue, and they just need the education to know how to make that difference,” Abrams said.

Director of Student Wellness and Health Promotion Nancy Chase said she hopes her office’s new approach to sexual assault education and prevention will give students access to the resources the campus has to offer.

Chase said her office has started these education efforts with students before they get on campus, through summer programs, as well as during New Student Orientation, 1743 Days and freshman FYE classes.

“We have developed a very systemized approach, to generate a focus on prevention and education early in student’s freshman year, and a continued focus as they matriculate as students,” Chase said.