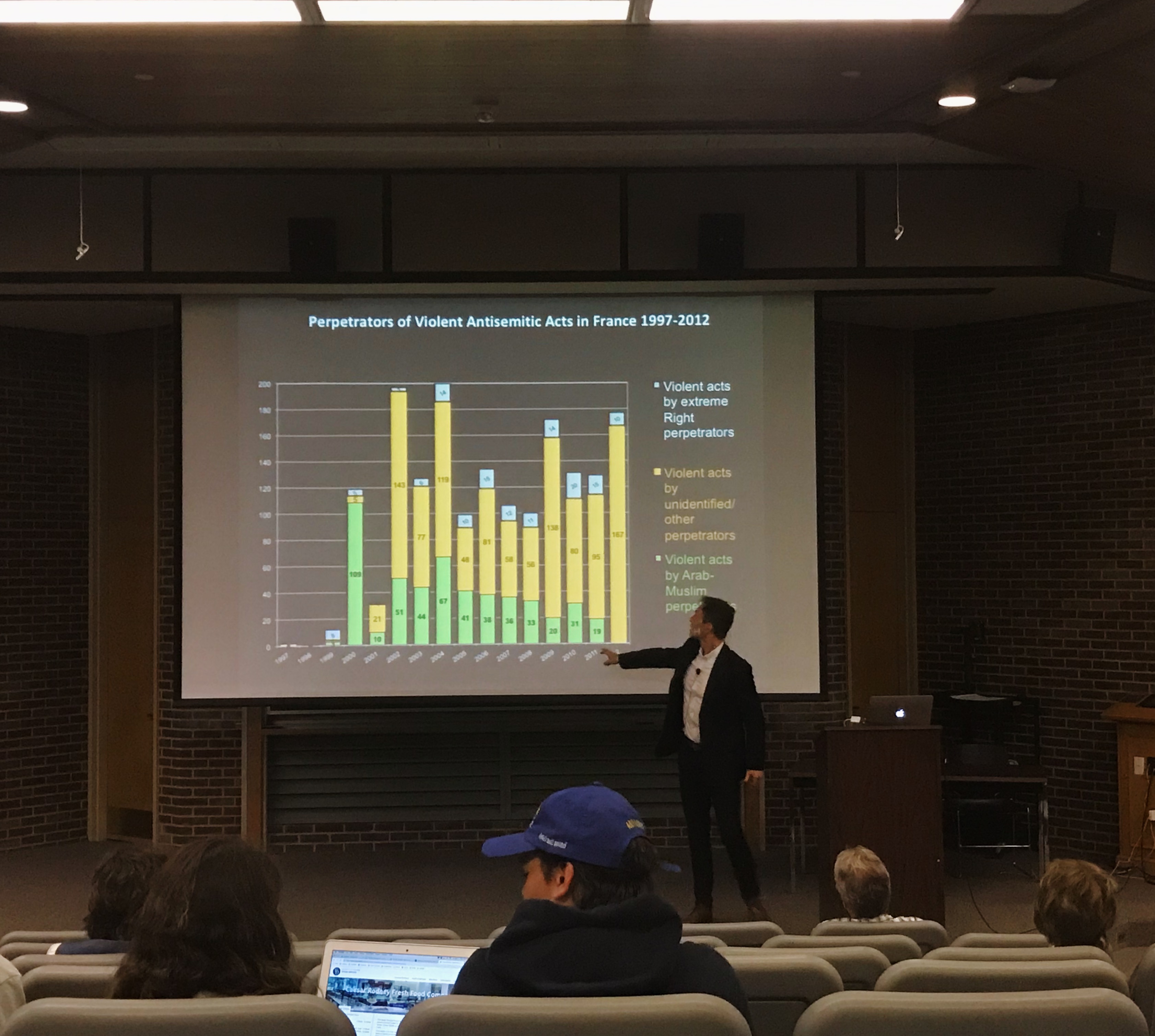 ​Alexis Carel/THE REVIEW
​The university has taken strides to promote awareness of antisemitism in a world “after Pittsburgh.”​

The plague of mass-shootings, which grips America in fear, spread its blight into the Jewish community to tragic effect almost a year ago. Seven people, including the shooter, were injured and 11 were killed in Pittsburgh at the Tree of Life, or L’Simcha, Congregation last year. The shooting was and is considered one of the most deadly targeted attacks against the Jewish community in recent United States history.

There are still reminders of the attack everywhere, with most taking the shooting as a stark reminder that antisemitism, while a fringe element, can still inflict needless pain in this country. Even further, with the border detention centers constantly being likened to “concentration camps,” it seemingly only leads to the darkly-tinged remembrance of the Holocaust and crimes against Jewish people in our global memory.

A year later, the university has taken strides to promote awareness of antisemitism in a world “after Pittsburgh.”

Günther Jikeli, the Erna B. Rosenfeld Professor in Jewish Studies and associate professor of Jewish and Germanic Studies at Indiana University Bloomington, came to campus on Sept. 24. He presented his research during the first of three planned lectures in a series through the Academic Engagement Network, co-sponsored by the Islamic Studies Program, called “After Pittsburgh: Antisemitism in Our World Today.”

Jikeli’s special interest is fixed in the history of antisemitism as a “historian and sociologist of Modern Europe,” both of which were applied to his lecture on the exploration of the supposed “Muslim Antisemitism” in France and Germany.

The lecture was preceded by a bit of informational “back story” on the relationship between Islam and Jewish people by Rudolph Matthee, the director of the Islamic Studies program and expert in Middle Eastern history.

Matthee outlined the two groups’ intertwined history, explaining how in Muslim societies, Jews “tended to suffer more indignities than Christians by and large.” This led to what he described as a fraught relationship. He additionally argued, although more intangible, that Muslims tended to “take Jews less seriously.”
mat
He went on to note that up until the 19th century, there was no real racial component in Islam’s approach to Judaism; rather, antisemitism was introduced by Christian missionaries in Europe, who pushed their own form of antisemitism in schools via negative sterotypes of Jewish people, spreading these notions which in turn fell on “very fertile ground.”

“The ambiance was already set for it,” Matthee said. “New notions … sinister practices of the Jews, the blood libel, that Jews needed the blood of Christian children for their rituals … was absorbed into the bloodstream of Islam.”

Jikeli began his talk by describing the large variety of different communities, all with different interpretations of Islam. The strongest and most dominant political Islamist organizations attempting to influence these communities are striving for the implementation of Sharia law.

Jikeli touched upon the diversity of anti-Semites as well, with the main sources residing in Western Europe, featuring extreme right-nationalism, antisemitism from Muslim individuals and the left’s anti-Zionism, featuring negative notions that Jews are permanently “under suspicion of being part of an evil state.”

He also noted that the populist far-right may become stronger within the anti-Semitic electorate, due to its links to neo-Nazis fringe groups.

Jikeli cited a plethora of collected data and surveys in his lecture, one of the most impactful being a collection of antisemitic murders in Europe in the early 2000s to late 2010s. It included the 2012 murders of three children and a rabbi at a Jewish school in Toulouse, the 2015 terror attack at Charlie Hebdo that left 12 killed as well as several other murders that all made a reference to Islamist ideology.

To further bolster these claims of supposed “Muslim antisemitism,” Jikeli compiled a few surveys conducted in Europe. In one supplied where Jewish people were surveyed on the background of perpetrators in the “most serious antisemitic incident of harassment in the 5 years before the survey,” respondents in France and Germany overwhelmingly stated “Muslim extremist[s]” over other options such as “Christian extremist[s],” the political left and the political right.

Jikeli also supplied evidence from European CNN surveys conducted in Sept. 2018 with the question “How favorable or unfavorable are you towards Jews [in] your country?” eliciting responses providing evidence that around one-fifth of respondents had unfavorable views of Jews. He highlighted another survey about Jewish influence to note that half of Muslim respondents thought Jewish people had too much input in “conflict and wars across the world,” adding further to that aforementioned fraught relationship.

For a real-world view to contextualize what these antisemitic views of Muslims in Europe are, Jikeli supplied a few pieces of evidence of the general feelings of Muslims towards Jewish people. This included “classic” antisemitism like traditional stereotypes carried over the years (Jewish people being rich), negative views of Jewish people tied to Israel itself, negative views with “reference to the Muslim or ethnic identity or to Islam,” and finally negative views without any rationalization whatsoever (using “Jew” as an insult without any real reason why).

The main takeaways of the lecture noted that antisemitic views are “multi-faceted,” coming from a variety of sources that are spread amongst communities quickly. The phenomenon of historical antisemitic stereotypes coupled with the prevalence of conspiracy theories do sometimes elicit “certain perceptions of Islam and Muslim identity,” that of which does seemingly include hatred against Jewish people.

While Jikeli’s lecture highlighted specific instances of Muslim antisemitism in areas of Europe, it must also be stressed that both sides of this discussion remain marginalized groups. There is seemingly distrust of the other on both ends, leading to a tense divide that occasionally manifests into violence and hostility, some instances of which being fatal for either side.

In a world “After Pittsburgh,” it surely makes little sense to demonize one group over the other as we simultaneously remain in a world “after 9/11.”