The Blue Hens started off last Monday with a win against Miami University by a score of 2-1. Throughout Monday’s game the Blue Hens offense put the pressure on Miami’s defense in the first half, outshooting the Red Hawks 6-1. But the team just couldn’t get the ball in the back of the net.

It wasn’t until junior midfielder Femke Strien scored a penalty stroke in the 22nd minute, the first of her career. Later on in the game Strien scored again in the 36th minute, tying her career high. The Red Hawks tried to make a late run with Allie Grace Joyner scoring in the 50th minute, but redshirt senior goalkeeper Sydney Rhodes held on for the win.

Head coach Rolf van de Kerkhof talked about his teams struggle in the first half.

“To remain patient, don’t force, don’t freak out, just keep on doing what you’re doing,” van de Kerkhof said. “Would be nice if we score early and more often, but you can’t route that you just have to remain calm and eventually it will go in.”

Friday evening at Rullo Stadium, grey skies and light rain were the backdrop to an otherwise cheerful game between the Blue Hens and the American University Eagles.

Delaware kicked off the first quarter with a career-first goal from sophomore Bo van Hunnik, assisted by freshman Ashlyn Carr. An early second quarter goal by sophomore Grace Hoepfner, assisted by junior Femke Strien, brought the score to 2-0 to finish out the first half.

As American turned up the heat in the second half, the Blue Hens responded.as Strien, the reigning CAA Player of the Week, scored two goals, the first assisted by junior Lotte de Koning and the second unassisted.

The game ended in a shutout as No. 16 Delaware came away with a 4-0 victory.

“I think our offense was pretty good this game,” Strien said. “We’re going to be playing a couple more ranked teams so it’s going to be interesting to see how we perform against them.”

In addition to the win, the Blue Hens played their entire bench and welcomed freshman Kate Gourley onto the field for her collegiate debut.

“It was exciting,” Gourley said. “Something new. It’s good to be part of a new team and see where we’re going to go this season.”

The field hockey team finished their busy week with a 3-1 win over Penn State, the ninth-ranked team in the nation to start the season. Penn State got off to a hot start with a goal at the end of the first period from roughly seven yards out. Early on, Delaware struggled to break through Penn State’s defensive structure. However, they found opportunities down the right side and were able to retake some momentum heading into the second period. Early in the second, a UD penalty corner resulted in a shot cleared off the goal line by a Penn State defender.

From there on out, UD began to take control of the game. They dominated possession for the duration of the second period, coming close to scoring on several occasions. The Blue Hens won a penalty corner with 1:55 left in the first half and took advantage. Junior Lotte de Koning found the back of the net after being assisted by teammates Grace Hoepfner and Ally Pollak, and the Blue Hens went into halftime tied 1-1.

To start the second half, Delaware picked up right where they left off, coming close on two separate opportunities to begin the third period. After surviving a Penn State counter-attack, the Blue Hens managed to win another penalty corner with nine minutes left in the third period. In a very similar fashion to their first goal, Delaware added to their tally on the scoreboard, this time through junior Femke Strien for her fifth goal of the season.

During the fourth period, Penn State controlled possession and looked threatening, but Delaware’s defense was strong enough to withstand these attacks. As time began to wind down, Penn State committed more and more players forward, which enabled Delaware’s forwards to have more space to operate. They counterattacked and managed to put the game away through a goal from Ally Pollak with seven minutes left in the fourth period. The Blue Hens finished strong and didn’t allow another goal, giving Delaware a huge win to cap off their three-game week.

With two penalty corners resulting in goals, it was clear that the Blue Hens placed specific emphasis on scoring from those opportunities.

“We were able to scout Penn State and we knew they had a few opportunities to be vulnerable, and we exploited that very well,” head coach Rolf van de Kerkof reflected post-game.”

“We just forgot that we should play our own game the first 10 minutes… but when we regrouped and kept things simple, we were able to switch on and the rest is history if you look at the remainder of the game.”

“If I just look at the entire game, we played so well as a team, and we won this game as a team… we beat Penn State together.”

The Blue Hens will look to carry the momentum of this week’s three wins forward, as they have two tough away games coming up against Rutgers and St. Joseph’s, both of which are nationally ranked. Strien expects the team to maintain its momentum, and continue to have fun and work hard. 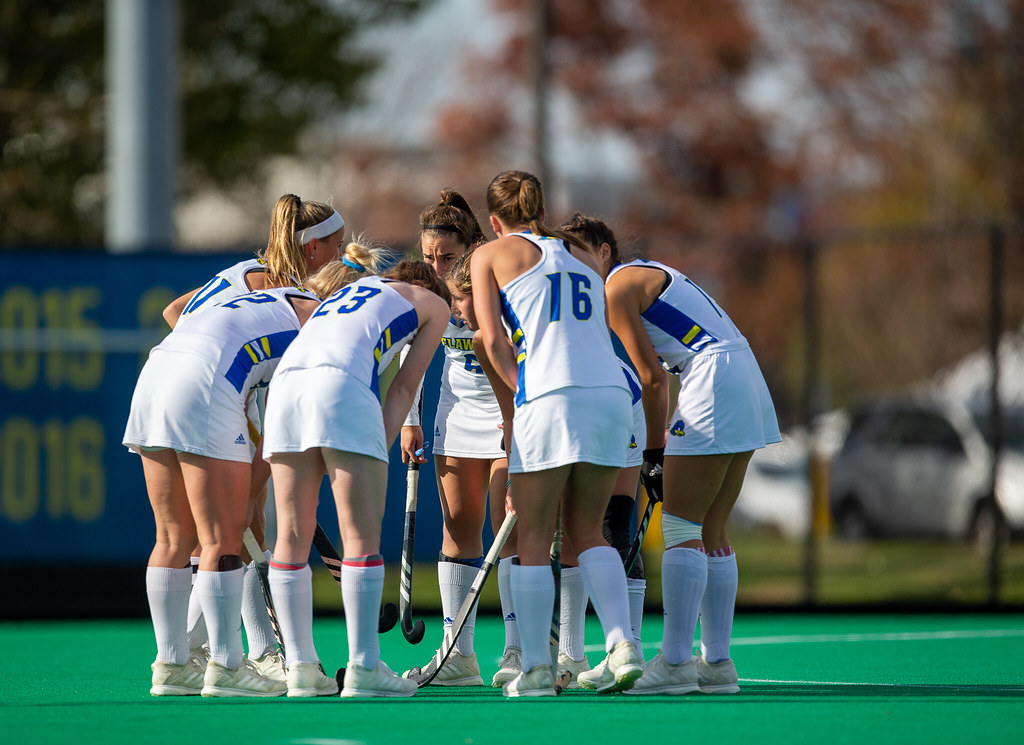