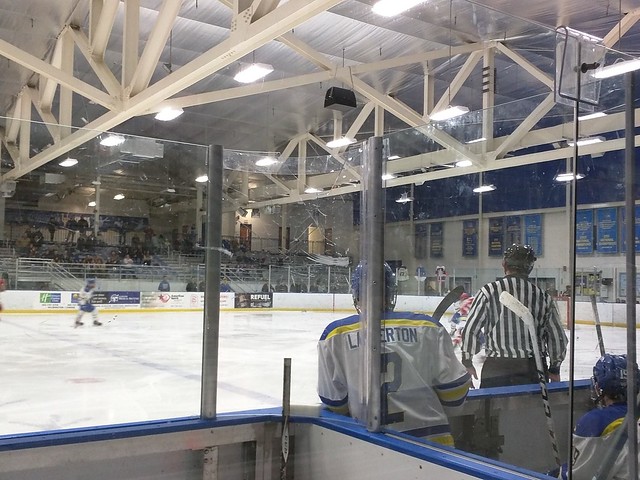 Teddy Gelman/THE REVIEW
Due to allegations of marijuana use by team members, the university has decided to cancel the Delaware men’s club ice hockey team’s trip to the playoffs.

Just a few hours before they were scheduled to leave for their league playoffs, the Delaware men’s club ice hockey team was interrupted by the news that it wouldn’t be going anywhere.

During the afternoon of Feb. 24, the team’s three captains broke the news that due to allegations relating to marijuana use by team members, the university had canceled their trip to the playoffs, held at the University of Rhode Island.

According to an anonymous letter delivered to The Review, these allegations were manifested in a $100 cleaning fee, allegedly for the use of marijuana, billed from the Holiday Inn Express in Fort Collins, Colo. to the University of Delaware. The team stayed at the hotel during a mid-Nov. trip for games against both Colorado and Colorado State.

The team denies smoking marijuana during their November trip. According to the team captains, upon arriving to the Colorado hotel in November, they “immediately noticed [it] smelled of marijuana. [The captains] also have online guest reviews from travel-related websites showing that the Fort Collins Holiday Inn Express smells of marijuana, and that guests are charged a cleaning fee even though they deny having smoked marijuana.”

On the evening of Feb. 23, Stas Kukulka, operations manager for the Fred Rust Ice Arena, where the team practices, sent a text message to Vinny Zingarelli, the team’s president, informing him of a meeting the following day. This meeting included Kukulka, Zingarelli, Senior Associate Athletic Director for Recreation Jake Olkkola and Jim Kaden, assistant athletic director for the ice arenas.

According to the letter, Zingarelli was not made aware of the purpose of the meeting prior to its occurrence.

During the meeting, Olkkola told Zingarelli, along with team co-captains Cole Zucker and John Redgate, that based on the “cleaning fee” he would be contacting the American Collegiate Hockey Association (ACHA) to inform the organization that [the team’s] season was being terminated.”

Olkkola and Kukulka could not be reached for comment.

“The UD Men’s D1 Club Ice Hockey Team has been prohibited from taking part in all organized team activity due to allegations of violating Club Sport and University policies,” the university statement says. “The team has been referred to the Office of Student Conduct. The moratorium will remain in place pending the resolution of the student conduct process.”

The proposed sanctions against the team include maintaining the suspension for the entirety of the 2017-2018 season. This punishment would also include prohibiting recruitment of new team members during that time.

Delaware, the regular season champion of the Eastern States Collegiate Hockey League (ESCHL), was scheduled to play on Feb. 25 in the ESCHL playoffs. It needed two playoff wins to secure the league championship.

In a press release published on Feb. 25, the ACHA said that Delaware would “not be participating in the ACHA 2017 Men’s Division 1 National Championships” but did not provide any additional background.

The national tournament replaced the Delaware team with Colorado State.

Chris Perry, who oversees the Western Collegiate Hockey League (WCHL), said that he had “zero contact with the University of Delaware.” He said he received a call from the ACHA noting Delaware’s absence from the tournament, and was then tasked with, alongside ACHA officials, selecting another team to replace Delaware. Perry said he believes that the ACHA is unaware of details surrounding the team’s suspension, noting that he believes it is “all internal.”

Besides the university’s statement, no details have emerged from the Office of Student Conduct, the Office of Club Sports and Recreation or the Athletic Department.

According to one anonymous parent, the hotel had implemented a process of verifying the smell of marijuana since the beginning of 2017. At the time of the team’s trip to the hotel, however, the parent says it was solely an “assertion by housekeeping with no evidence.”

Jessica Saracino, a manager for the hotel, did not disclose information from the team’s November trip. She said that the hotel “doesn’t issue a smoking fee unless there was proof.” She could not specify what this “proof” amounts to or how it is measured.

As the team moves through the student conduct process, it has hired an attorney. A letter written by the attorney and provided to The Review was delivered to five significant faculty members of the university: Laure Ergin, the vice president and general counsel for the university’s Office of General Counsel; Dean of Students José-Luis Riera; Athletic Director Chrissi Rawak; Jake Olkkola and Jim Kaden.

The attorneys letter states that “the students were given no notice of the charges, had no opportunity to review the evidence, to call witnesses, or to cross-examine witnesses. There was no pre-hearing (as required), no hearing (as required) and no right to an appeal (as required). To be clear, these are the University’s requirements.”

The same parent listed above calls the situation a “kangaroo court.” Team captains label the suspension and its details as containing a “fundamental injustice.”