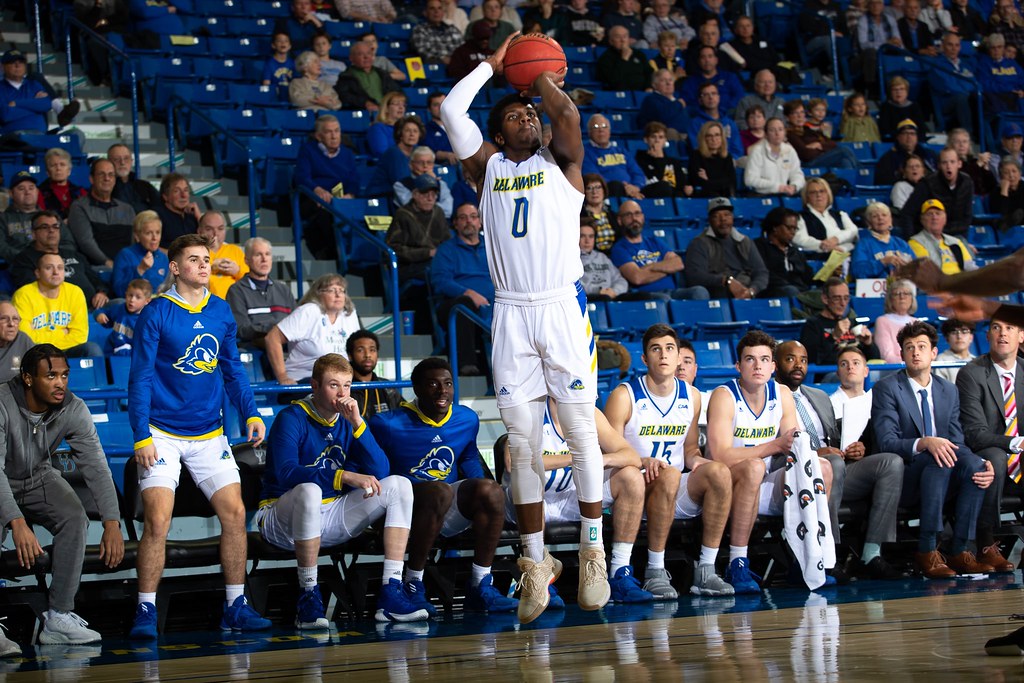 Sarah Boekholder, University of Delaware Athletics/THE
REVIEW
Ryan Allen has helped the Blue Hens to a 9-0 start and is second on the team with 20 three-pointers made.

At the age of 4, Ryan Allen was already dribbling up and down the basketball court.

“Growing up, I knew I had to play basketball,” Ryan Allen said. “Any other sport was basically a no-no.”

The junior guard from Bowie, Maryland grew up in a basketball family. His father, Spencer Allen, taught him the game and coached him until the age of 14. By the time Allen reached high school, he was set to follow in the footsteps of his uncle, LeRoy Allen, and cousin, Terrell Allen, both of whom played for the elite basketball program found at DeMatha Catholic High School.

“It was kind of a family tradition and it was a lot of pressure,” Ryan Allen said. “Coming in, my cousin was basically the man. He was a junior and started on the varsity team. I was the baby cousin. Everybody expected me to be as good as him, and playing at DeMatha is a lot of pressure. There are a lot of famous basketball players that come out of that school, so there are a lot of expectations that you have to meet.”

As a junior point guard at DeMatha, Allen averaged 9 points per game and was ranked No. 2 on the team with 51 three-pointers. As a senior, he was named first team for the 2016-2017 Washington Catholic Athletic Conference. 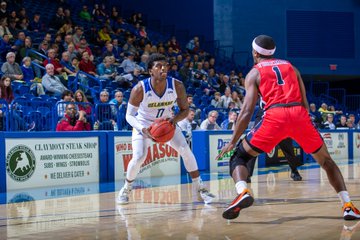 Sarah Boekholder, University of Delaware Athletics/THE REVIEW
Allen is second on the team with 14.2 points per game.

“It was one of those schools that was close enough for a drive home at anytime, but far enough where I got that living on my own feeling,” Allen said. “I also have a coach on staff that was my high school freshman and varsity coach, I got along well with my head coach and I felt like I was going to be put in a position to contribute right away offensively and as a leader.”

In 2016, Allen committed to play basketball at Delaware.

As a freshman, Allen started for the Blue Hens and was named Colonial Athletic Association (CAA) Rookie of the Year and CAA All-Rookie Team. He was ranked No. 3 in the CAA with 86 three-pointers, the second most by a CAA freshman in league history.

During the middle of his freshman season, Allen suffered a labrum tear in his shoulder and underwent surgery. After six months of recovery, he was cleared to play, only to experience his second injury of the year, a metatarsal fracture in his left foot.

“I broke my foot and missed about 14 games,” Allen said. “Mentally, that was pretty tough on me. I kind of distanced myself from a lot of people. It’s just hard not being able to play the sport you love.”

After his second surgery and a two month recovery period, Allen found support through his team and therapy.

“My teammates were great friends,” Allen said. “They checked up on me and made sure I was okay mentally. And I actually saw a therapist about it. That really brought me back to where I am now.”

As a third-year member of the Blue Hens, Allen is tied for ninth place in Delaware history with 147 career three-pointers and proudly wears the number zero on the court.

“I always wore zero growing up,” Allen said. “Growing up, being the younger cousin, the little guy, nobody really believed in me or had faith in me.”

With an undying love and commitment for the game, Allen shows no signs of stopping anytime soon.

The Blue Hens are currently 9-0 on the season, the best start in program history. They have even gotten a vote in the most recent AP Top 25 Poll. Their next game is at George Washington University on Saturday, Dec. 7 at 4 p.m.

All stats are accurate as of Dec. 2.

From Italy to New Jersey to Delaware, the 19-year-old Gianmarco Arletti is no stranger to adapting into a new climate.
Read more
Football

As cliché as it may sound, the saying “they need to dominate the line of scrimmage,” might need to be Head Coach Danny Rocco’s motto for Delaware football entering the Spring 2021 season.
Read more
Sports