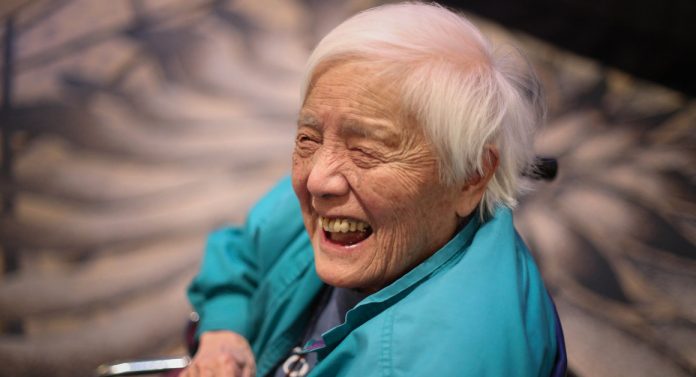 Grace Lee Boggs was a social activist who played a vital role during the civil rights movement in the 1960s. She is one of the most famous Asian Americans in United States history who stood alongside hundreds of other activists to ensure equality and justice for all.

“When we thought about the history of political activism and solidarity, we immediately thought of this woman, who spent decades living and fighting for all of us,” Peter Feng, associate professor of English at the University of Delaware, said.

On May 5, the University of Delaware’s Anti-Racism Initiative (UDARI) presented a webinar entitled, “Legacy of Grace Lee Boggs.” Filmmaker Grace Lee of “American Revolutionary: Evolution of Grace Lee Boggs” was the invited panelist. The webinar was co-moderated by Peter Feng and Delaware House of Representatives member Madinah Wilson-Anton, D-Newark. Members from the university community, including graduate and undergraduate students, participated in the structured Q&A. All participants had the opportunity to engage in an hour-long conversation about the civil rights movement, the influence Boggs has had and how the films were created.

The webinar was part of the larger project, “Fighting for All,” developed by the University of Delaware’s-Antiracism Initiative-Asian American Subcommittee, which comprises Feng, Vimalin Rujivacharakul, Haihong Yang, Chika Inoue, Yuanchong Wang, Keerthi Potluri and David Kim. The Fighting for All project is a multi-unit partnership. In addition to the webinar on May 5, the subcommittee also worked with the university’s Office of Admissions to reach out to more than 50 high schools in Delaware, Maryland and Pennsylvania to offer teaching resource on cross-racial antiracism through the life and work of Grace Lee Boggs, as well as an opportunity to participate in the webinar and to stream “American Revolutionary” without charge for 2 weeks.

“We organized this event to talk about alliances between Asian Americans, African Americans and other diverse communities. Alliances are not simple and there are real conflicts between us; there are also misperceptions and a history of attacking unity by sowing division,” Feng said.

Michael Vaughan, the interim vice provost for diversity and inclusion at the University of Delaware, initiated the event by welcoming everyone to the webinar and thanking the speakers and guests who were present. Vaughan acknowledged Boggs specifically for the contributions she and her husband James Boggs made towards the civil rights movement.

“Grace and her loving husband of 40 years truly modeled for us what real and authentic cross cultural partnership, intellectualism, and activism really looks like,” Vaughan said. “And the impact they made was possible through their shared and committed love for all lives.”

While Boggs and the civil rights movement made great changes for immigrants and minority populations in the United States, Dr. Minion K.C. Morrison, a professor at the University of Delaware’s School of Public Policy and Administration, acknowledged how recent events have made it an obligation to host a webinar like this, where students and faculty can freely discuss issues that minority communities, specifically Asian Americans, are still confronted with today.

“The United States was built by a society of immigrants,” Morrison said. “This would suggest that the authenticity of Asians as a part of that social compact is uncontested, but we’re in an epidemic of racial violence against Asians that occurs in the public square and in broad open daylight. And so our task for being here is clear.”

Providing more insight into the history of Grace Boggs and her work, a short clip from Lee’s documentary was played during the webinar to highlight her life and her contributions towards social activism. She spoke about how a rebellion is simply an outburst of anger, but not necessarily a revolution: revolution, in itself, is evolution towards something much bigger and a change much stronger.

To Boggs, rebellion and revolution were two big questions. Although it takes a while for change to be set into motion, once that motion gets going, it is crucial to see where it goes and the impact it can have on others — but change specifically has to start with the people.

Lee talked about her work with Grace Boggs after the clip was played for audience members. She recalled how she had asked Grace Boggs permission to interview her while the social activist was visiting the University of California, Los Angeles (UCLA) where Lee was a student. Grace Boggs asked Lee to travel with her to Detroit where she could complete her interview. Lee recalled the event as being an incredibly eye-opening experience.

“Boggs had a rather privileged background growing up actually,” Lee said. “Her father had a Chinese restaurant and she grew up in Queens, New York. What I found really interesting though was how disinterested Boggs was in all of her involvement when she was attending Barnard College. She was doing all these things, but she saw so many other immigrants suffering, and I think that’s what led her towards philosophy, and later, activism.”

During the webinar, Lee emphasized how Grace Boggs was a big advocate for the youth. She believed that they were the future for change towards a better country and world, and she wanted to empower them to abolish the system.

University students and community members logged on for the event were able to ask Lee questions about her work with Grace Boggs and her own involvement with political and social activism. Angela Yu, president of the university’s Asian and Pacific Islander Student Association, asked Lee about her Asian American identity and how it had changed and evolved over the years, a struggle that many minorities experience growing up.

“Just like Boggs started reflecting on herself during her years in college, I’ve done the same thing by asking myself, ‘Who am I?’ and ‘Where am I?’” Lee said. “And I think this is the type of self-reflection that many Asian Americans and minorities experience. It’s like, you don’t choose the times you live in, but you do get to choose who you want to be and how you want to act.”

The webinar on  May 5 followed another webinar on April 28 on Yuri Kochiyama, in which members of the Kochiyama family and renowned filmmaker Rea Tajiri also participated.

The Asian American subcommittee of UDARI intends to continue this conversation in Fall 2021. Members of the initiative believe that having events like this creates a learning opportunity for community members, staff and faculty alike, and also allows for students to understand the issues at hand, and what can be done to solve them.

“I will end with Grace’s own words from the film,” Vaughan said. “‘We have to recognize that we are responsible for the revolution of the human species. It’s a question of the two sided transformation. We have to change ourselves in order to change the world.’”