Green Dragon slayer for hire, in a geography department near you 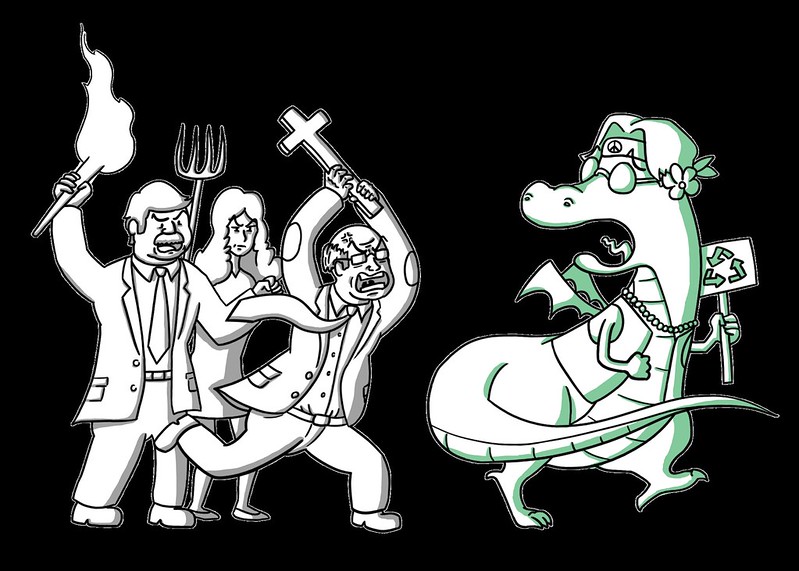 Taylor Nguyen/THE REVIEW
University professor is a listed speaker for the Cornwall Alliance, an anti-environmentalist group.

BY Caleb Owens
Editor in Chief

Typically, the pejorative plight of an environmentalist is one of emasculated shame — the tree-hugging, bunny-loving weaklings of the world, distracted by the beauty of some leaf on the windshield and crashing their Priuses into an organic farmer’s market.

One of the Cornwall Alliance’s listed speakers and trusted affiliates, David Legates, happens to be a tenured geography professor at the university.

Legates’ affiliation with the group recently received mention in sociologist Antony Alumkal’s book, “Paranoid Science: the Christian Right’s War on Reality.” The book charts the long and complicated relationship between science and the American Christian evangelical movement, examining the intra-religious tensions that have accompanied various strands of science denial, including the intelligent design and anti-environmental movements.

Although many, if not the majority, of Christians believe in climate change and support scientific findings, far-right American evangelicals have been responsible for some of the most radical opposition to scientific positions regarding topics such as climate change and evolution, working in close tandem with secular free-market idealogues.

Alumkal, a professor at Iliff School of Theology and practicing Episcopal Christian, argues in his book that much of this opposition traces its roots to corporate America, as anti-environmental groups like the Cornwall Alliance have received indirect funding from fossil fuel companies, such as Exxon Mobil.

As Alumkal noted in an interview with The Review, the religious and secular aspects of anti-environmentalism should not be considered separate — they are just different components of the same anti-environmental movement.

To find religious justification for their activity, Christian anti-environmentalists and groups such as the Cornwall Alliance claim a specific literal interpretation of Genesis, the first book of the Bible, finding free market justification in passages that describe God giving humans unrestricted reign over earth. According to the interpretation, God granted humans dominion over the planet and the license to exert power over earth’s resources. From here, environmentalist attempts to regulate fossil fuel use, for instance, stand contrary to man’s God-given destiny.

But, as Alumkal writes, the opposition gets stronger. According to groups like the Cornwall Alliance, environmentalists, in their efforts to limit the use of certain natural resources, harm the poor. Certain resources, such as coal, are cheap and provide energy to many people, and environmentalist attempts to prevent coal use deprive the economically disadvantaged of necessary resources.

And still, the opposition grows. In 2010, following heightened progressive evangelical efforts to combat climate change, the Cornwall Alliance released an anti-environmentalist video series, “Resisting the Green Dragon.” In his book, Alumkal charts the claims made in the series, such as the view that environmentalism is a pagan religion and the belief that “environmentalists seek a totalitarian global government in order to impose their agenda on others.”

In the promotional video for the series, available at this link, Legates appears briefly, giving a lecture. The video introduces “radical environmentalism” as “one of the greatest deceptions of our day,” a movement that works assume control over America and the world.

Legates, who is a listed speaker for the Cornwall Alliance, receives mention in Alumkal’s book for his comments about global warming in one session of the “Green Dragon” series, titled “Putting out the Dragon’s Fire on Global Warming.” In the lecture, Legates accuses the scientific community of “post-normal science,” in which facts are used and distorted by scientists to pursue unrelated spiritual and political goals.

According to Alumkal, this rationale selectively employs postmodern deconstruction, an intellectual movement that gained traction throughout the 1980s and 90s, which intends discredit the status of science — an opportune way to push the anti-environmental agenda.

“They use postmodernism in a very strategic manner,” Alumkal said. “Postmodernism says all science is a power game. If you’re trying to take down the dominant science of evolution, you can say, ‘hey, it’s just a power game.’ But they’re not really invested in postmodernism, and their goal is to have themselves come to dominate science. Obviously they believe science is real, they read the Bible like it’s a science book.”

Legates’ denial of anthropogenic, or human-caused, climate change has received publicity in the past. On numerous occasions, most recently in 2015, government officials and climate activist groups have questioned Legates’ funding and motivations, possibly traceable to fossil fuel industries. Legates previously served as the Delaware State Climatologist but resigned in 2011, following scrutiny from public officials about his denial of popular climate science findings, such as rising sea levels, and his opposition to federal environmental regulation.

Legates, alongside an array of pro free-market, anti-regulation economists, is listed as a member of the “Cornwall Alliance Speakers Bureau.”

Similar situations have arisen at other institutions, in which tenured faculty adopt positions that oppose mainstream science and reject the available, consensus data. At Lehigh University, for instance, a faculty member of the biology department, Michael Behe, is an outspoken advocate of the intelligent design movement, which denies Darwinian evolutionary theory. The department provides a disclaimer on its website, noting that the department does not endorse Behe’s positions and has a stance of “unequivocal support for evolutionary theory.”

Alumkal said that, while it is impossible to gauge the influence that the Cornwall Alliance and the “Green Dragon” campaign have had on the evangelical rank-and-file, the doubt of climate science and anti-environmentalist sentiments are an undeniable presence.

“The best case scenario is a generational replacement in the evangelical world,” Alumkal said. “Where these people just die off from old age, and the next generation says ‘no thanks,’ especially to the extreme right. We’re already seeing a shift on the issue of same-sex relationships among younger evangelicals, and the older evangelicals are clearly alarmed by this trend, and there’s nothing they can do to stop it.”

According to the National Aeronautics and Space Administration (NASA), climate change “is extremely likely to be the result of human activity since the mid-20th century and proceeding at a rate that is unprecedented over decades to millennia.” NASA notes recent evidence and detrimental consequences of climate change, such as melting glaciers, rising sea levels and increased frequency of natural disaster, projected to intensify over the coming years.

While members of organizations such as the Cornwall Alliance find justification for their free-market ideology in Genesis, to Jodi Rose, the executive director for a local environmental group, Interfaith Partners for the Chesapeake, the Bible instead provides justification for efforts to preserve the planet.

“I think the one failure in that line of thinking is the assumption that resources are infinite,” Rose said. “I think that as human beings with the God-given capacity to think critically, to evaluate where we’ve been, to learn from circumstances, I think it would be agreed by all people that there are a finite amount of resources that we all share. A clear example of this is water.”

Rose pointed to how, because resources are not infinite, the unsustainable use of resources today deprives others of those resources, both today and in the future, violates what she considers a central tenet of Christian morality — that human beings should be concerned about the wellbeing of one another. She pointed to the arguments advanced by Pope Francis, who has stressed the need to care for the planet’s shared space.

Rose acknowledged that many struggle to visualize the repercussions of climate change, which will strike most devastatingly in the future, but pointed to the need to critically assess scientific evidence that is currently available.

“Some well-intended people get a little concerned that the environmental movement is becoming more obsessed with glorifying creatures and the ecological system than the creator,” Rose said. “It may be that some believers feel that espousing such strong principles for environmentalism in the way that it’s been framed is actually taking away from the glory that should be given to god. That’s interesting, and we as an organization think a lot about that, and try to find ways to show how these two things really are interconnected.”