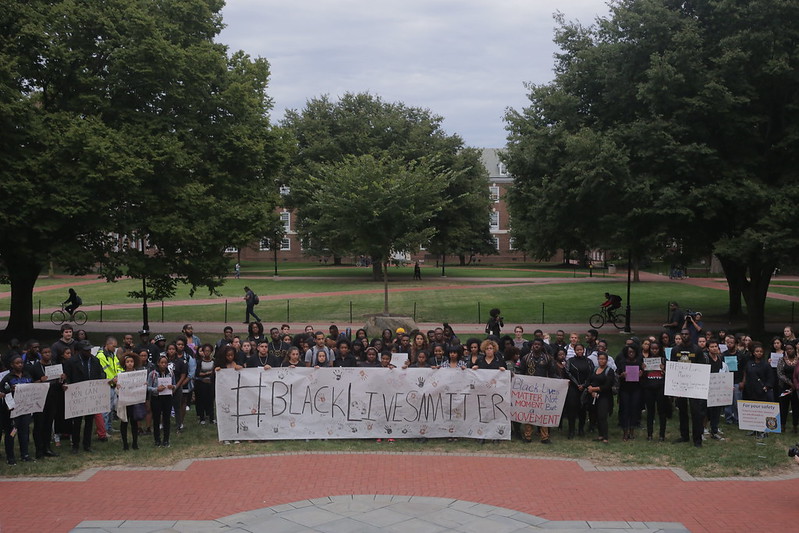 Hands folded and legs crossed on a gray couch, acting president Nancy Targett smiled as her eyes surveyed a back room at the Center for Black Culture, surrounded by student activists.

“That was really powerful, that was just so powerful,” she said, referring to the emotionally charged #BlackLivesMatter protest that took place Monday night outside Mitchell Hall.

Moments before, the small group of student leaders were joined by fellow classmates at the steps of the historic building to voice their opposition to keynote speaker Katie Pavlich, who was asked to speak by the registered student organization, Students for the Second Amendment.

Pavlich, a New York Times Bestseller and frequent commentator for Fox News, is a growing presence among modern conservatives. She has drawn national attention for her commentary on major social issues like rape and sexual assault on college campuses, as well as harsh criticism of the Black Lives Matter movement.

Late Sunday night, a core group of student activists who held demonstrations last year met once more in Trabant University Center and prepared for the protest by creating signs and alerting the campus community—taking full advantage of social media to spread their message.

“We really felt it important to redefine our mission,” senior political science major Georgina Class-Peters said. “Once we as a leadership team have that together, we can then go to our community and be like, ‘this is why it’s important for you not to be violent and not to be disrespectful.’”

Jeremy Mathis, a senior studying criminal justice and women and gender studies, was one of the students involved in planning the protest. He said the goal of the protests was to show that students at the university will not stand for bigotry or intolerance.

“We’re going to sit in the front, be there and let her know that the University of Delaware is not a place where this sort of thing is welcome,” Mathis said. 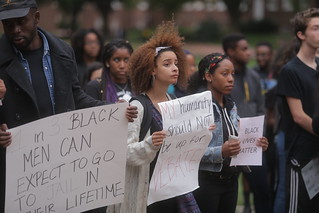 Provost Domenico Grasso attended the protest and speech and said the manner in which the protesters have rallied around their cause is something to be proud of.

“They’ve done this with a great deal of dignified comportment that reflects well on them and the university as a whole,” Grasso said.

In front of Mitchell Hall, the protesters wore black and stood in solidarity to support their cause. Purple ribbons were also handed out to show support for victims of sexual assault. The scene was tense, but protest organizers professed a desire to begin a campus-wide conversation.

Following 15 minutes of silence in protest of Pavlich’s prior remarks, the protesters entered the auditorium. Only after they were directed through metal detectors and their bags were searched by police were spectators allowed to take their seats.

Focusing her speech on the Second Amendment, Pavlich contended that concealed carry of firearms is an effective way to prevent sexual assault and that gun control does not reduce violent crime. Invoking explicit anecdotes involving sexual assault and gun violence, Pavlich spoke to an auditorium filled with protest signs and National Rifle Association patches.

At the conclusion of the speech, the group of student activists returned to the dewy lawn in front of Mitchell Hall as Pavlich returned backstage, allowing a select number of press and fans to speak with her.

As the enduring mantra, “Black Lives Matter” was defiantly yelled by protestors and reverberated throughout the walls of the hall, Pavlich shifted her weight and smiled as she fielded questions from reporters about the presence of the movement.

“I will say I thought they were respectful and quiet in the hallway, but I don’t know if they would have been if we didn’t have a heavy police and security team here,” she said.

As the group outside grew in size, they listened in silence as individuals passed around a megaphone and offered their perspectives on the night, as well as personal experiences with sexual assault, discrimination and gun-related violence.

The meeting soon moved to the Center for Black Culture, where Targett proceeded to engage the group in a discussion. Nodding in acknowledgment, Targett listened as each student processed the night’s events, as well as elaborated on their experiences as a minority on a predominantly white campus. 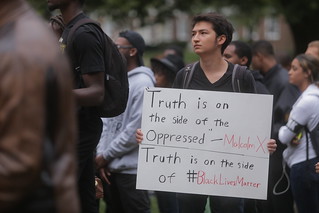 KIRK SMITH/THE REVIEW
Diversity on campus is one of the key issues the university’s strategic plan, Delaware Will Shine, is focusing on.

“Sometimes as people of color, and me being a queer person of color, I get bogged down, it can be so oppressive,” Mathis said. “But in this moment, I saw how beautiful my university is. I saw the character of the individuals I surround myself with, I saw faculty and staff members that I trust with my education supporting me, and it was such a beautiful moment.”

Smiling again, Targett looked around at the young group of student leaders and leaned forward.