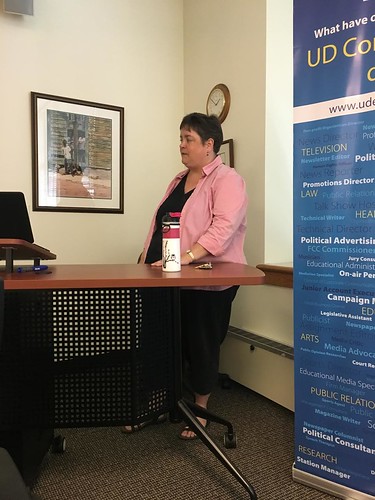 The meme on Facebook read, “One-third of women are physically abused. Two-thirds of men aren’t doing their jobs.” A tweet, referencing Malia Obama attending Harvard University, asked if she applied as a “Muslim” or “foreign student.”

Professor Jennifer Lambe, an associate professor of communication, displayed these memes during her presentation about hate speech on Wednesday in Pearson Hall. She further explained that the meme making light of domestic violence was reported to Facebook, but the company refused to remove it.

“I’m interested in hate speech partly because I feel like it encapsulates many of the challenges to freedom of expression in the twenty-first century,” Lambe said. “It also raises the question of what the proper role of technology companies is these days.”

Lambe spoke about the escalating problems of hate speech, as well as some solutions to combat its destructive effects. She specializes in First Amendment rights and studies the booming pressures of balancing media freedom and liability.

Her presentation – “The Problems of Hate Speech” – was the last part of the Legal Studies “Brown Bag Lunch” speaker series, which examines the relationships between various current issues and the law. The series is hosted by the university’s Legal Studies Program.

Lambe defined hate speech as “an expression that attacks individuals or groups because of their race, ethnic background, religion, gender or sexual preference.” She pointed out that this meaning leads to definitional issues, making it difficult to decide what words and phrases should be classified as hate speech.

Commenting on the relevance of the topic, Lambe emphasized that it is an international issue that raises all types of jurisdictional questions. Laws about hate speech have traditionally been “nation bound,” making it especially difficult to combat the detrimental effects on a global level.

Hate speech has been a bone of contention at the university. She gave the example of the controversial media personality Milo Yiannopoulos’s visit to campus in October.

“How is that compatible with the university’s stated goals of diversity and inclusion of various groups?” Lambe asked. “How do you balance the right of freedom of expression and the rights of the student groups who asked him to come to campus?”

With the advent of the Internet and other mobile technologies, communication has become more global. Now, countries have different legal approaches in terms of dealing with hate speech, making it difficult to devise a universal solution.

“Every country has their own background and history and frankly their own fears about communication and the effect that it can have,” Lambe said. “Solutions to hate speech are going to have to come from a variety of places.”

In the United States, the legal framework that exists is the Fighting Words Doctrine, in which the courts must question if the speech has become sufficiently threatening to warrant censorship. Unlike other Western democracies, the United States limits government censorship and instead encourages more speech, rather than nailing it “underground.”

Arguing that government regulation cannot be the primary solution, Lambe believes that our approach is the most effective. Laws in other Western democratic countries are often excessively broad and selectively applied.

She also asserts that communication helps to create a social environment, which potentially allows hate speech to cause rattling, problematic effects in society.

“I would argue that we need some non-governmental ways to try to approach the longer term, more subtle kinds of effects that happen from hate speech,” Lambe said.

Lambe presented efforts fashioned by individuals, advocacy groups and educational programs that attempt to restrict hate speech. Southern Poverty Law Center is an advocacy group that files lawsuits on behalf of groups victimized by hate speech and hate crimes. The University of California Davis initiated a student-run campaign called “Words That Hurt” to inform the public of certain words and phrases that are emotionally harmful.

In addition to government regulation and these other efforts, Lambe believes there is room for industry self-regulation as well.

Recently, there has been more discussion on how technology companies, like Google and Facebook, can assist in limiting the effects of hate speech in the future.

“There is definitely a role for these companies to play with this issue,” Lambe said. “I think they need to embrace that challenge and really put their minds toward what they can do within the bounds of democracy.”