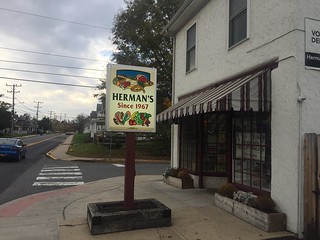 Nestled at the corner of East Cleveland Avenue and Wilbur Street, Herman’s Quality Meat Shoppe has been upholding their name as the “home of quality and custom fresh cut meats” since 1967.

The retail meat store sells everything from fresh beef, pork, chicken, fish and hams to organic produce and self-made lunchmeat.

After celebrating their 50-year anniversary on Oct. 14, which featured a cake from Bing’s Bakery, tributes from Sen. David P. Sokola and local representative Paul Baumbach, as well as different raffles and giveaways, store owner Christine Herman says they plan to make this a year-long celebration.

The shop began in the 1900s as a family-owned business at the end of Main Street, where the university parking garage now stands. The Steele family sold the shop to the McMullen family, who hired Christine Herman’s father-in-law, Luther Herman, as an employee.

The McMullens eventually sold the shop to Luther Herman and his wife Jeanette on Oct. 14, 1967. The shop remained on Main Street for about three years until the university eventually overtook the lease. The family then moved their meat shop to its present location on East Cleveland. In 1992, Luther Herman sold the meat shop to his son, Timothy, and his wife Christine. Timothy Herman passed away on Oct. 8 in 2008, afterwhich Christine Herman took over as the sole owner.

As the years have gone by, Christine Herman says she has witnessed the residents surrounding her shop shift from being local Newark residents to predominantly college students. While her usual customers still frequented Herman’s Quality Meat Shoppe, she realized she needed to adapt to the growing customer base of college students.

For years, families would come in around move-in day or parents weekend asking for sandwiches, she says. She would have to turn these customers away because she did not yet have the proper licensing to make and sell full sandwiches. 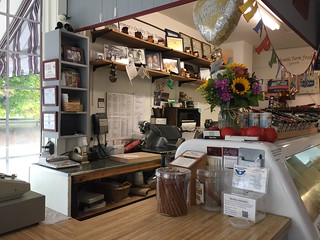 After growing tired of turning down their business, she crafted a kit made out of a cardboard box that contained all the ingredients of a sandwich. The only thing the customer needed to do was assemble it.

About four years ago, Christine Herman went through the process of obtaining the proper licensing and regulations and can now sell sandwiches in-store.

“That’s how a lot of the change and evolution has taken place,” she says. “If you can’t beat them join them. That’s how you grow. You can’t stay stagnant, you have to grow and meet the needs of the community.”

Having received an undergraduate degree in Spanish from the university, Herman says she likes to do what she can to give back to the faculty and students. She says she provides different bones, joints and eyeballs from the meat she sells to several classes within the science departments. These students, in turn, use the animal parts for research and educational purposes.

This community value is also reflected in Hermans’ other employees.

Two of the employees, Craig Lightcap and Sandra Bell, had been customers at Herman’s for years until they retired and decided to work at the meat shop.

“You learn something every day,” Lightcap of Glenfarms, Md., says. “It’s the best place I’ve ever worked.”

John Skopowski, the head butcher, has been working at Herman’s since high school. After his high school graduation, he began to learn the proper techniques of cutting meat. He says he has loved getting to know the Herman family over his 10 years working for them. They have taught him everything he knows about being a butcher.

Christine Herman says that even in her husband’s last year of life, when he was very sick, he continued to uphold their meat shop’s value of serving the community. He would insist upon going into the shop each day to be there for his regular customers, despite how ill he may have been feeling.

“That was his passion,” Christine Herman says. “That is what got him up and out of bed every day. It was an inspiration to me but it has also now transferred to me. [I may be] tired today but I know I have a responsibility and other people counting on me. I want to come into work and be apart of that need.”