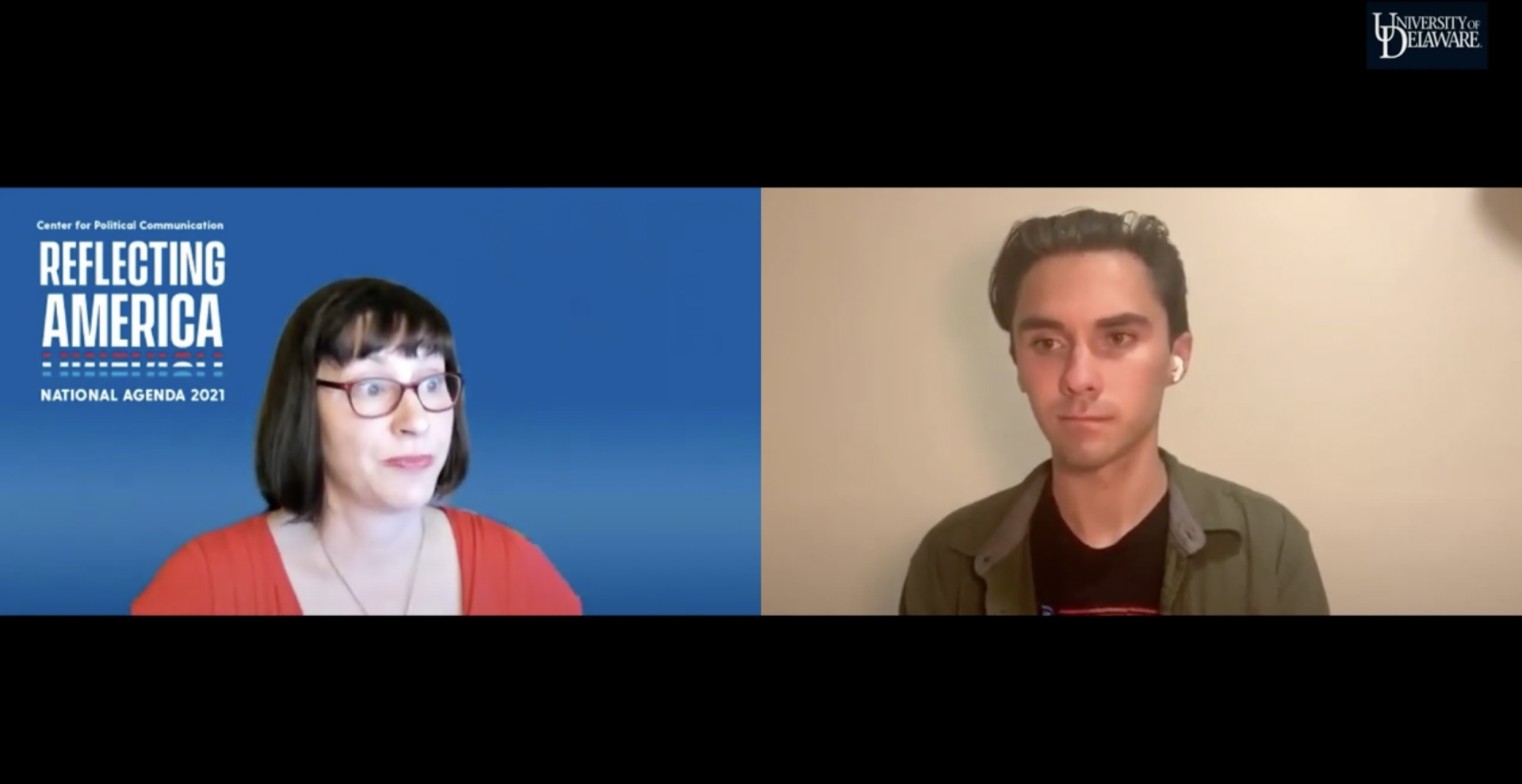 On Oct. 20, 2021, 20-year-old Nikolas Cruz pleaded guilty to 17 counts of murder for the 2018 shooting massacre at Marjory Stoneman Douglas High School in Parkland, Florida. His fate will be placed in the hands of a jury, who will be asked to decide whether Cruz should be sentenced to life in prison without the possibility of parole — or if he should be executed for his crimes.

“I’m happy that things are moving forward, and that there’s some form of justice being brought,” David Hogg, shooting survivor and gun reform activist, said during a National Agenda speaker series event on the day of the pleading. “But ultimately, I don’t think real closure is ever fully possible because there’s nothing that can ever bring my classmates, people’s siblings, children, moms and dads and all the people that have been affected by this back.”

The university’s Center for Political Communication presented its fourth installment of National Agenda’s fall speaker series, “A Generation’s Voice”, to the public on a live webinar. Hosted by Lindsay Hoffman, program director, the university community was also able to view the event at Mitchell Hall.

After the school shooting, Hogg emerged as a leader in gun violence protests in 2018, particularly for his role in a student-led demonstration in support of gun control legislation known as March For Our Lives (MFOL). His call to “get over politics and get something done”​ immediately placed him in the national and international media spotlight.

The now Harvard student remembers fighting the political, social and psychological warfare being waged against him, his family and fellow student activists.

“I’ve gotten thousands of death threats in the mail and sent to my school for me,” Hogg said. “not to mention the threats my family have gotten. My house has been swatted […] We were literally just teenagers that didn’t want our friends to be shot anymore.”

Despite the massive coverage and celebrity support the efforts received, Hogg still found himself at odds with sensationalized media.

“I’ve seen clips of myself from interviews that I did in the wake of the shooting spread like wildfire that are purposely and intentionally edited to make it sound like I say that I wasn’t at school that day,” he said. “Even though I was literally in a classroom interviewing my classmates not knowing whether or not we were going to make out alive. It’s deeply frustrating because we just want the country to move forward on this. This shouldn’t be a partisan issue.”

This conversation lent itself to how social media and politicians also came together in opposition to Hogg’s views and experiences. Republican Representative Marjorie Taylor Greene, for example, called Hogg “little Hitler” and claimed he was a “bought and paid little pawn” in a Facebook post in 2018. An unearthed video from March 2019 showed Greene confronting Hogg with similar accusations that resurfaced earlier this year.

Hogg’s choice not to respond to Greene’s comments came as a result of keeping his composure and people around him safe, especially as Greene revealed she was carrying her own gun as she followed him towards the Capitol building.

“It is not my responsibility to talk to [Greene] and have a conversation because I need to be looking out for the safety of my staff and myself in that situation,” Hogg said. “I was going to walk away and not have a conversation with somebody who was intimidating us as well as being armed or implying that they were.”

Living through the COVID-19 pandemic for almost two years has shown that historical events can define an entire generation. Hoffman’s students observed mass school shootings as a key definer of their generation. Hogg spoke to how these lived experiences represent a larger issue of growing up in the “Gen Z” generation.

“We’re one of the most diverse generations in American history,” Hogg said. “A general theme that defines my generation is growing up in a world of fear. Many of us were born right before or right after 9/11. We haven’t known a pre-9/11 world. We haven’t known a world where school shootings aren’t part of the news on a weekly basis.”

Despite the problems that were publicly pervasive in Hogg’s life, he also fought battles behind the scenes. Long before he became an activist, Hogg channeled his dyslexia and attention deficit hyperactivity disorder (ADHD) into a speech and debate club he involved himself with during his middle school and high school years. His traumatic experiences also resulted in developing post-traumatic stress disorder (PTSD), which he combats with mindfulness meditation.

“Five minutes a day of mindfulness doesn’t fix everything, but it helps change your perspective to one that just makes everything a little bit better because it’s one of the few things that you can control,” Hogg said. “You can’t necessarily control what’s happening to you, but you can control your approach to it and your view of it.”

“All we need to do is focus on combating hatred and combating mental illness in the form of increased funding for therapists, whatever it might be — I’m all for that,” Hogg said. “But let’s not stigmatize mental health by framing anyone that has depression or PTSD, like me, as somebody that’s going to be immediately violent and a threat to society.”

He also spoke to getting down to the root cause of school shootings, rather than enacting performance measures, like allowing teachers to own guns in their classrooms or implementing metal detectors, for safety.

“We’re putting a bandage on, for lack of a better term, a bullet hole,” Hogg said. “We could either keep trying to address the symptoms or we can address the cause. I think it’d be a lot better if we didn’t implement the security theater measures that make students uncomfortable. Black and brown students specifically are discriminated against and often face police brutality. It’s not only distracting but it can be traumatizing.”

While nationwide gun legislation may not be on the horizon, Hogg is hopeful in standing up for the rights of himself and others.

“History has a habit of movements,” Hogg said. “I think of people like Erica Ford in New York City who have been working for over two decades in Jamaica, Queens to stop daily gun violence from happening. I think about the Black and brown women that have done this work. They enabled us to do this work at any amount of success that we have had because of the legacy of the work that they created and continue to do on a daily basis.”

Hogg thanked the university students for their fight in making a change.

The National Agenda series will continue in-person and online, with Delaware State Senator Sarah McBride on Nov. 3, in an event entitled “A First in the First State,” followed by “artivist” Nikkolas Smith, with an event entitled “The Power of Art,” on Nov. 17.

Editor’s Note: Laura Matusheski is a former intern at the university’s Center for Political Communication. As of December 2020, she no longer works there.