On Saturday night in the Trabant Lounge, drag queen Selena Dela Luna was, quite literally, dazzling. Dressed in a shimmering maroon jumpsuit — one of the most iconic outfits of the late Tejano singer, Selena Quintanilla — Dela Luna stepped onto the dimmed stage.

From the recesses of the small platform, the sounds of a live Selena show began, as Dela Luna took a mic and began an energetic, high-spirited performance. Twirling, shaking and emphatically lip-syncing during every second, Dela Luna kept the audience rapt as they cheered, clapped in time to the beat and filled the room with the occasional “yes!” or “whoo hoo!”

For many, Quintanilla was more than simply a performer: she was an icon and a role model. Even posthumously, her legacy is so strong — especially within the Latinx community — that she has been honored in countless tributes and events. For the members of HOLA, a Resident Student Organization (RSO) dedicated to serving the university’s Hispanic and Latinx community, it seemed only logical to host a tribute to an artist with such a profound impact.

“Selena is such an iconic person within the Latinx community,” Danyella Lopez-Juarez, a junior majoring in medical laboratory science and an HOLA member says. “Her Spanish wasn’t very good and people in the community kind of judged her. It kind of shows that [because] a culture [is] judging you because you were born in this country, doesn’t mean you don’t have roots there or you can’t be a part of the culture.”

The event, called Bidi Bidi Bom Bom, after one of Selena’s most famous songs, not only featured Dela Luna’s performances but also a trivia game, musical chairs and a Selena look-alike contest. Ayannah Stanton, a sophomore Spanish major, took home first prize for her homemade recreation of one of Selena’s stage outfits.

Stanton, who is also a Selena tribute singer, says that her outfit took “about three weeks” to make because she had to attach approximately 500 rhinestones to it. For Stanton, Selena is symbol of “independence and strength.”

“Being a Mexican woman in a white neighborhood and being a female Tejano singer was not heard of, she made it out of a not so good area,” Stanton says. “She really defied odds and made sure the impossible was always possible.”

For Brianna Moran, the event coordinator of Bidi Bidi Bom Bom and a junior studying psychology and Spanish, Selena’s life and success is a personal inspiration.

“Like her, I did not grow up learning Spanish, so that’s where I related to her the most,” Moran says. “She learned Spanish as she grew up and she wasn’t ashamed of it. Back then, there was such a stigma against minority women in the music industry. Basically, she helped pave the way.”

With last Saturday’s event, Moran wanted to bring awareness not only to the Latinx community but to the LGBTQ community as well. Moran is close friends with Dela Luna through work, and felt that inviting Dela Luna to perform would be the perfect opportunity to spread awareness about both communities, as well as help her friend gain exposure in the Newark community.

However, Moran’s decision to include Dela Luna’s performance in Bidi Bidi Bom Bom was met with mixed reactions from the Newark community.

“It was a little difficult getting donations for prizes,” Moran says. “Not a lot of people support the LGBT community, and when they heard it was a drag show, there was a lot of rejection.”

Still, Moran and HOLA persisted and were able to bring Bidi Bidi Bom Bom to life, complete with prizes and performances. Moran sees events like Bidi Bidi Bom Bom — which highlight the intersectionality of the LGBTQ and Latinx communities — as crucial to diffusing barriers and eliminating prejudices.

“By bringing these organizations together, we’re helping with the Latinx community’s association of stigma against the LGBTQ community,” Moran says. “This is the first step to accepting people that are outside of the norm of the ‘machismo’ culture in Latinx communities.” 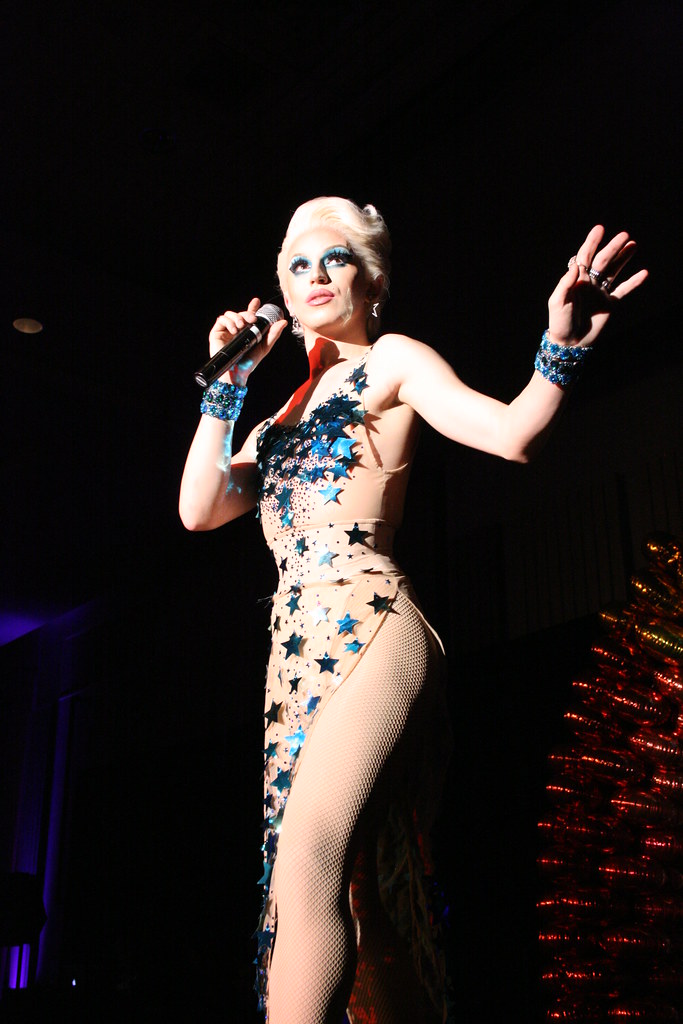 Who runs the world: Drag Queens!