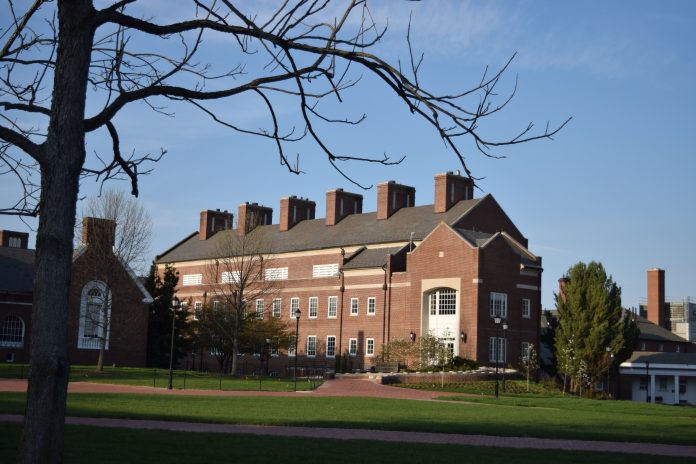 For better or worse, virtual instruction has been the primary means of pedagogy over the past year for most professors.

While some harbor strong opposition to this new mode of teaching, others, like English professor Thomas Leitch, view it as a mixed bag.

As an instructor who specializes in teaching Hollywood films and literary theory, Leitch has experimented with various methods of film screenings over the years in an attempt to spark lively and engaging movie discussions in his classes.

Among them, his preferred strategy entails showing his students a movie and discussing it with them immediately afterward in the same class period.

“When movies strike people as worth talking about, they want to talk about them right then,” Leitch said. “So, although I’ve tried many different screening affordances with upper-level courses, my favorite one is to show the movie, give people a five minute break, and then immediately start talking about it.”

Because of the COVID-19 pandemic, though, Leitch said he has been forced to forego these group movie-watching sessions in favor of an asynchronous model in which students watch their assigned movie on their own time and then discuss it in class several days later.

For someone who values the conversational component of watching films, Leitch said the inability to watch films and discuss them promptly thereafter has been an unfortunate consequence of the pandemic.

“I can put it this way —  I’ve listened to a lot of people talk about movies while I’ve come out of movie theaters,” Leitch said. “But one thing I have never heard anybody say to anybody else was, ‘This was a terrific movie. Let’s get together next week and talk about it.’’’

In spite of this loss, though, Leitch said that there are indeed positive aspects to learning in a virtual environment. In particular, he said Zoom’s chat feature has garnered participation from many students who may otherwise have chosen to remain quiet.

“The chat box is one of the great things about Zoom,” Leitch said. “It doesn’t just seek to duplicate something about real space, it actually adds a new dimension that we don’t get in real space.”

Specifically, Leitch noted how Zoom allows students to share remarks with the rest of the class without interrupting the speaker and to participate in discussions “with the idea that other people will respond and get back to [them].”

However, not all professors see redeeming qualities in online instruction like Leitch does. Physics professor Ilia Gogoladze, who teaches introductory physics courses to hundreds of students every semester, said teaching online has been a great struggle.

“Frankly speaking, I am not so happy about online classes,” Gogoladze said.

Like Leitch, Gogoladze will be teaching entirely virtually in the fall. According to Gogoladze, this is because the university is not allowing large classes to return to campus.

While teaching through Zoom, Gogoladze said he finds it especially difficult to gauge student comprehension.

“I don’t see the students’ reactions,” Gogoladze said. “When you explain something, you need to see reactions. Do you need to repeat [topics]? Or do you need to describe and discuss [topics] in a different way? You are missing this piece of teaching.”

“Some students have difficulties turning their cameras on for a variety of reasons, so it’s harder to work together and make connections with people when you can’t see their face and read their facial expressions,” Berk said.

For both Gogoladze and Berk, this issue is compounded by the fact that their respective disciplines are inherently visuospatial.

“There’s written and spoken discourse [in math], but there’s also symbols and graphs and diagrams and gestures, like when we’re talking about a function and its behavior,” Berk said. “We use the Zoom whiteboard a lot in my classroom, but it’s harder for students to write out an equation, especially because most of them are using a mouse to try to do that.”

When he was teaching in-person, Gogoladze said he would regularly perform demonstrations in his classrooms to reinforce rather abstract concepts, such as magnetic fields and circuits.

Now, unable to access these materials in the physics storage rooms on campus, Gogoladze said he no longer performs these simulations.

“Physics is an experimental science,” Gogoladze said. “You need to show the phenomena, [and] then explain it.”

Berk, who will be teaching on-campus in the fall, also said she is ready to move on from teaching exclusively virtually.

“[Zoom instruction] has been OK, but I’m very eager to come back to campus and resume teaching in person,” Berk said.

While teaching online, Berk said she has relied extensively on her department’s meticulously crafted curriculum, which contains detailed lesson plans that allow her to predict which concepts will be more challenging to students than others.

She said this has proven to be particularly helpful considering the challenges associated with lecturing to a room with several faceless students.

“All students are different, but some of these common misconceptions and common difficult topics, we’ve already worked a lot of that out,” Berk said.

Yet, even with the reassurance provided to her by this collaborative curriculum, Berk said that it is simply not possible to virtually replicate the interactivity and camaraderie that are so essential to learning math, which she called a “multimodal, multi-semiotic kind of discipline.”

“We’re really trying to build community and have people build relationships and have people feel comfortable in math class, and [students] have reported missing that aspect,” Berk said.  “It’s not the same in Zoom.”

Nonetheless, Berk said she looks forward to implementing some of the lessons she learned during the pandemic to her regular mode of instruction. Specifically, she said that holding virtual office hours over the past year has helped her realize that she can accommodate more student interactions in the future.

Gogoladze also noted the important role that office hours play in supporting the emotional well-being of students. According to him, so many students attended his weekly Zoom office hours during the first several months of the pandemic that the sessions often lasted “five to six hours”.

“In the spring and fall [of 2020], students just wanted to talk,” said Gogoladze. “They wanted to express their confusion. They were looking for social life, and they wanted to use office hours just to socialize.”

A sense of social belonging is ultimately what Berk strives to promote in her classes.

Regardless of their academic discipline, though, all three professors agreed that COVID-19 has dramatically changed their approach to teaching.

“I don’t think that’s questionable,” Leitch said, when asked whether the pandemic has changed standard educational paradigms forever. “The more interesting question is – will that be good? I don’t know. Let’s wait and see.”