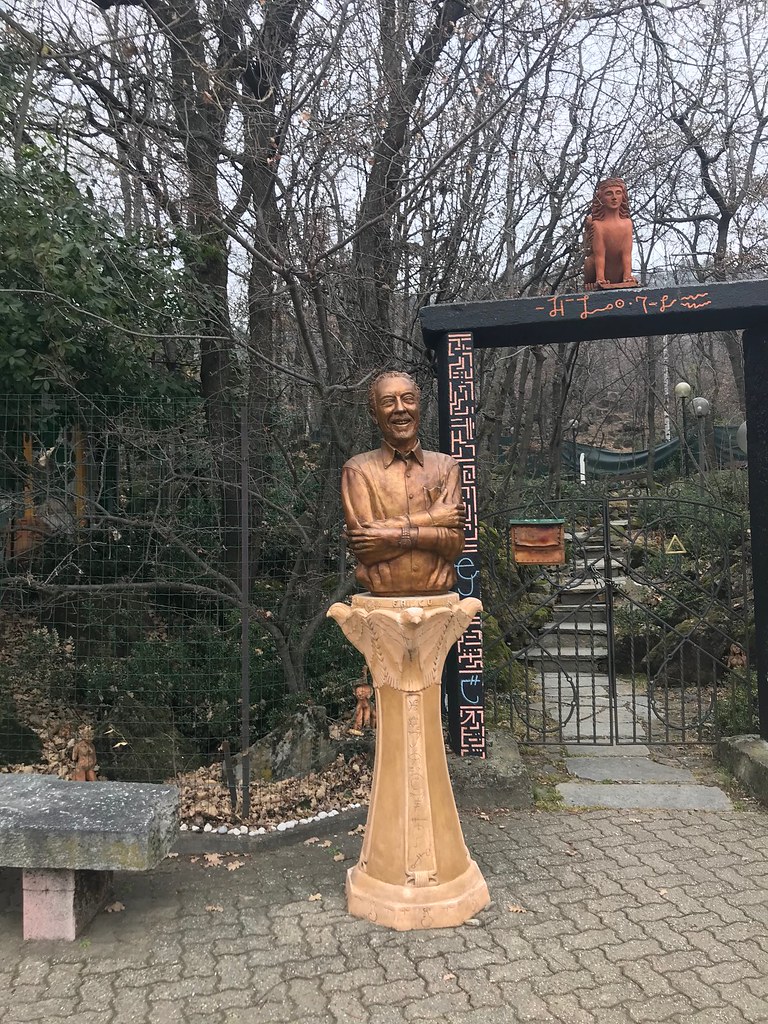 Danny Zang/THE REVIEW
A bust of Oberto Airaudi (Falco Tassaraco), the founder of Damanhur, standing watch over the private gardens in the village center.

And boy, did I come close to converting.

Over winter break I spent a month in Italy for a religious pluralism course. This meant touring dozens of churches, along with a handful of mosques and synagogues of note. That our focus in our visits to different cities was primarily centered around the three Abrahamic religions wasn’t a shock. After all, Italy has a long and storied history with Christianity, Judaism and Islam.

But I admit, after weeks of discussing God, I was ready for something new, something that went beyond the faith structures we’d seen so much of already. And that’s Damanhur, baby.

Founded in 1975 by Oberto Airaudi and a couple dozen devoted followers, the Federation of Damanhur is a spiritual community nestled in the hills west of Milan. Designed as a self-sufficient unit with its own currency, policies and infrastructure, Damanhur has since swelled to several hundred members.

To be clear, Damanhur is not a religious cult. At least, not in the common, pejorative sense of the word. In fact, the Damanhurian faith isn’t much of a religion at all; it’s a philosophy.

There’s no set doctrine to follow or rigidly enforced rules of worship. Damanhurians share common ideations of spiritual energy comprising our galaxy and all others, linking humanity in all its forms to life itself, but the rest is a bit of a mixed bag.

Metaphysically, Damanhurians believe in an unknowable divinity from which humanity and nature are derived; in this way, their religious philosophy is similar to neo-platonism. All of the deities worshipped by other religions are still divine, occupying an intermediate level between creation and humans.

Some of their more eccentric beliefs relate to the definition of humanity on a more galactic scale, where other planets populated with humanoid aliens can be communicated with through advanced meditation.

Damanhur echoes the meditative and enlightenment-striving projects of Hinduism and Buddhism, yet it stands apart from other faiths as a sort of composite of humanity’s collective spirituality; it is similar to author Aldous Huxley’s “perennial philosophy,” which held that all world mystical traditions are worshipping emanations of the same divine idea.

Our tour through Damanhur was led by a woman named Lizard, this being her Damanhurian name given in a tradition of animal first name and plant surname begun by Oberto himself.

Lizard guided us through the sculpture gardens that came about from the Battle of the Arts in the 1980s, a fierce competition among Damanhurians in which the expression of self through art became the primary battleground.

We visited the Altar of Fire, an open-air temple at which Damanhurians meditate and, on nights with a full moon, consult the Oracle for answers about their future. These open-air Fire Temples are similar to those of the Zoroastrian religion.

But the most striking part of Damanhur, the part that really brought out the existentialism in our tour group, were the Temples of Humankind.

In 1978, Oberto Airaudi, now referred to as Falco Tassaraco, which translates to “Falcon Dandelion”, decided that the tiny commune needed a place of worship to center the faith. High up in the mountains bordering Chiusella Valley, a couple miles away from the commune itself, Falco and his followers began to dig out a network of tunnels and chambers 100 feet deep … entirely by hand.

The project took years to finish and plans are in place to continue adding chambers, without heavy machinery of course. And while the very construction of the Temples is impressive in its own right, the true awe-inspiring quality is what lies within.

As we made our way down the narrow passageways leading from the modest entrance, a small wooden door preserved from the very first shack Falco built over the tunnels, we walked on top of, alongside and under painted surfaces covered from floor to ceiling in intricate designs and multicolored patterns.

The Temples of Humankind are plural for a reason; each major chamber in the underground web of tunnels is a “temple” representing a cornerstone of Damanhurian belief.

Among these chambers were the Hall of Spheres, containing translucent orbs containing water imbued with spiritual energy intended for use in meditation; the Hall of Earth, with its dreamlike murals of landscapes and extinct animals calling attention to human responsibility to the planet’s preservation; and the Hall of Mirrors, an area for meditation surrounded on all sides by mirrors.

The last chamber, the Labyrinth Hall, was by far the most breathtaking and significant in understanding Damanhur. The Labyrinth Hall leaves no surface undecorated except for the passageways still being dug out. Its main hallway tells the story of humanity, from its humble origins to the modern age, through murals stretching from wall to wall across the arched ceiling.

In the corridors branching out on either side are still more murals, these depicting gods from nearly every pantheon on Earth, from the Norse to the Hawaiian, even including the Abrahamic faiths. Every few feet is a stained glass window, lit with artificial light from behind, displaying major gods or artifacts, from Zeus to Ganesh to the Torah.

What struck me most about Damanhur was the sincerity and optimism of it all, the lack of any apocalyptic prophecies or cynical analyses of human nature. Damanhur behaved more as a composite of religious spirituality in all its forms, an acknowledgement of divinity and the connection with the human spirit.

Lizard spoke of each god with a reverence that I’ve come to not expect from followers of different religions. There was no trace of amused tolerance, only a sincere belief in a unifying spirituality.

Damanhur doesn’t claim to have all of the answers. By Lizard’s own admission they’re a community without a set doctrine that one must follow to be Damanhurian.

Perhaps it’s this easing of traditional structure that makes the commune so interesting to learn about and even more interesting to witness. The treatment of spirituality as energy to be harnessed rather than rules to be followed was, in many ways, refreshing.

I didn’t convert. Beyond the beautiful art and eccentricities of Damanhur, I found a new perspective on spirituality that has allowed me to recontextualize my own feelings on faith. The lessons I learned go beyond faith and can be readily applied to everyday life; if you want to be like a Damanhurian, just believe in something good.