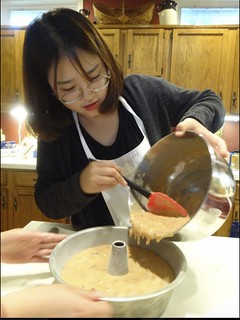 With an oversized bow in her hair, string of pearls around her neck and virgin martini and unlit cigarette in her hand, Nancy Turner prepares to teach a cooking class.

The class wrapped up its first session of the semester one week ago. With the second session starting the first week of November, Turner, 58, says she is getting ready for holiday themed classes and hopes to teach at least 12 classes per week.

Turner, originally from South Carolina, says she started the program in 2008. She approached Scott Stevens, director of ELI, about starting a tutoring cluster on American cooking and etiquette. She says he quickly gave her the green light.

“I don’t know that we had any idea that it would be as popular as it is,” Turner says.

ELI students are given the chance to participate in various tutoring clusters in the program. Their options range from gardening to engineering. All clusters are included in their tuition.

Turner hosts the class in the kitchen of her house located at 176 West Main Street, which she has lived in since 1992. She originally rented rooms in her house to ELI students to help deal with empty nest syndrome when her son moved out.

Kutay Yilmaz, an ELI student from Istanbul, Turkey, signed up for Turner’s cooking class this past session. He says he was given an opportunity to form friendships with other ELI students in Turner’s class – something that is missing from his other classes.

“We learn more than recipes for American blueberry cake or catfish stew,” Yilmaz says. “I made friends from over six different countries.”

Yilmaz, 31, says he invites his new friends, from countries like Venezuela and China, over to drink Turkish tea and often takes weekend trips with them to Philadelphia.

With her 40-year-old mixer and measuring spoons – both inherited from her grandmother – on display in the kitchen, Turner says she emphasizes American tradition in her lessons with costumes and historical anecdotes.

“I use the recipe as a vehicle to bring them to the important parts of our history,” Turner says.

Jianbo Zhang, an ELI student from China, was also a student in Turner’s class the past session. Zhang, 28, says she baked a cake – the same American blueberry cake recipe that is Yilmaz’s favorite – for the first time in the class.

Turner, who is technically a tutor in the program and compensated just like other tutors would be, says teaching American hospitality leaves a lasting impression on students.

When they enter the workforce upon completion of their education, they are equipped with the right skills – ones that are not taught in the classroom, she says.

Turner says she never expected to be teaching international students the same lessons her mother and grandmother taught her.

“At this stage of my life, I thought I would be traveling the world,” Turner says. “I never imagined the world would travel here, to me.”