Is my Halloween costume offensive? Probably.

Every year in late October, we have the freedom to dress up as any person, place or thing of our choosing. What we also don’t realize, however, is that with this freedom comes the responsibility to avoid appropriating a culture and offending others.

In almost every town in America, there is a run-down shopping center marked with cracked pavement and yellowed “For Lease” signs posted on the dirty windows of abandoned storefronts. In the heart of these graveyards, there is a pop-up Halloween store. 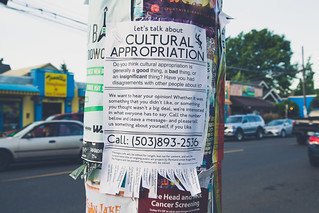 Courtesy of Tony Webster
In the past several years, more and more of the mainstream population has begun discussing cultural appropriation, particularly around Halloween.

Beyond the sliding glass doors and the faded linoleum of the front walkway, there is a sprawling collection of wigs, vials of fake blood, prosthetic limbs and walls lined with various costumes. Wrapped in plastic and made for purchase, you can find costumes such as, “Pocahottie,” “Mexican Man,” “Geisha Gorgeous” and “Call Me Caitlyn.”

These costumes are indicative of a serious (and often overlooked) social issue—cultural appropriation. When we adopt elements of another culture, even in the spirit of fun, we exploit and use historically marginalized groups for personal gain.

“In essence, you’re embodying their culture and their identity when you’re putting on this costume,” Jeremy Mathis, a senior studying criminal justice and women and gender studies, says. “It’s not a good embodiment.”

In most cases, Halloween costumes strive to be either humorous or erotic—and there is no issue with this. The issue lies in taking an entire culture or group of people and reducing them to a lowbrow satire or an over-sexualized caricature.

Aspects of any given culture fascinate those who are not a part of it, but incorporating that culture into one’s appearance without the appropriate context is inherently offensive. Oftentimes, this phenomenon takes root in an eagerness to recreate depictions of certain groups in mainstream media.

“I use Disney as a primary example,” Mathis says. “As a kid, you’re introduced to Mulan, you’re introduced to Pocahontas. You get these ideas of what people look like. [People are] trying to emulate characters or they see something in a culture that they think is really dope and really amazing, but they don’t take that second to think ‘How would someone perceive me dressing like this?’”

Despite the strong burgeoning discourse about race and culture on college campuses, there is still a fundamental disconnect between that conversation and how the knowledge taken from it is applied to students’ behavior. This year alone, there have been several examples of culture-themed parties on college campuses that have depicted a minority, ultimately perpetuating stereotypes.

Though whiteness may be the norm on campuses like Delaware, as recent diversity statistics indicate (we currently stand at 75 percent white), it is important to recognize that one’s actions must confront a world of nuanced culture and identity. To be able to laugh at and sexualize these appropriated costumes is an example of white privilege.

According to data from the National Congress of American Indians, Native American youths have the highest suicide rate, a 50 percent higher AIDS rate and a poverty rate that makes them the poorest people in the United States. While death, disease, and addiction plague reservations and communities, one can still walk into any pop-up Halloween store and purchase a, “Warrior Chief,” “Navajo Hottie,” and “Pow Wow Wow,” costume.

There is a rigid dichotomy in a company providing the means for the public to enjoy Halloween, profiting from the affects of years of oppression. There is also a chilling connection in appropriating a culture and perpetuating stereotypes to further solidify the dominance and privilege of another culture.

“Instead of being empathetic, and understanding and caring about these communities, you’re just saying, ‘You don’t really matter,’” Mathis says.

When choosing a Halloween costume, self-awareness is key.

“Think twice about what it is you choose to put on for a Halloween costume,” says Jessica Edwards, an English professor and Faculty Diversity Scholar. “Think about your costume as definitely making a statement, and what sort of larger conversation you are trying to be a part of.”