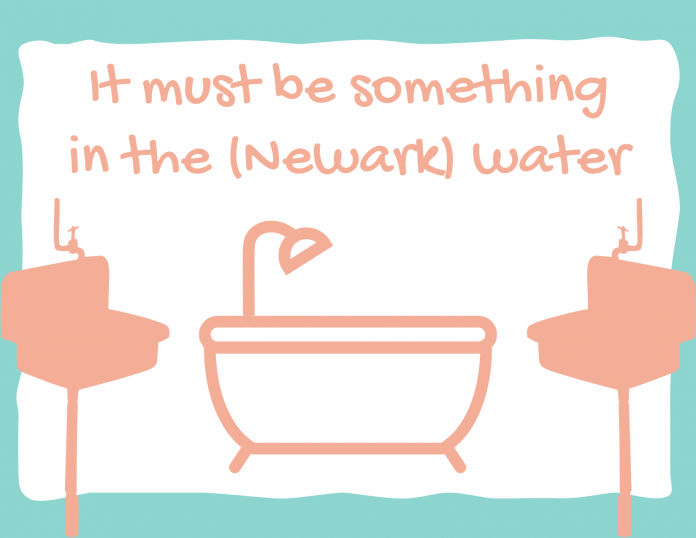 A few weeks after junior Katie Mauer returned to Newark for the school year, she noticed a change in her hair and skin. The alleged cause? Newark water.

“My skin and hair get so dry and the texture of my hair gets so different I can’t even style it normally,” Mauer said.

Mauer is not the only one who has these concerns. Many students have expressed frustration about the water quality in Newark.

“It’s not good,” Wylie Feaster, a junior at the university, said. “In the mornings I try not to use water from the faucet. There are red stains at the bottom of my shower. The water almost smells sulfuric and eggy. Pretty much everyone I’ve talked to has invested in a Brita filter.”

It’s not just students who have noticed this. Visitors from out of state have expressed similar concerns.

“My mom and sister came for parents weekend and said that the water tasted and smelled funny so they would only use bottled water while they were here,” junior Kristina Longo said.

According to the Department of Natural Resources and Environmental Control (DNREC), 90% of Delaware’s waterways are considered impaired for pollutants such as nitrates and phosphates, including Newark’s main source of drinking water — White Clay Creek. According to DNREC’s source water assessment for the city of Newark, White Clay Creek provides two-thirds of the drinking water for the city and university, supplying around 4 million gallons of water every day.

According to the White Clay Wild and Scenic Water Quality Report, published in August of 2020, the majority of the White Clay Creek is nutrient-impaired with nitrates and phosphates. Rainwater carries bacteria, sediments and chemicals from farms, lawns and roads into the creek, which ends up impacting the quality of water in the city. Population stress and suburbanization have also been cited as causes of water pollution in the creek.

Gerald Joseph McAdams Kauffman, director of the Delaware Water Resources Center at the university, said that the major concerns with water quality in the area lie with Nitrogen, bacteria, and sedimentation runoff. According to Kauffman, most of the water in White Clay Creek that is sourced from Chester County, Pennsylvania runs through farms that use unsustainable or antiquated agricultural practices that end up leading to sedimentation and the leaching of nitrates into the drinking water.

“During the summertime, high Nitrogen levels combined with high water temperatures lead to harmful algal blooms, which causes the city to shut down the reservoir,” Kauffman said. “That’s an immediate public health concern.”

Kauffman warned that these consequences will only worsen with time as the climate continues to warm.

“The reservoir remains shut down until the water temperatures cool down,” Kauffman said. “As climate change gets more intense, it takes longer for that to happen.”

Kauffman also mentioned how important cover cropping and no till agriculture are helping to offset harmful runoff.

“Planting things like clover and not disturbing the soil while harvesting helps keep the soil intact and reduces runoff,” Kauffman said.

Luckily, there are solutions in place to improve water quality, and there seems to be interest from a wide variety of stakeholders in ensuring safe drinking water for the area. Most of these solutions involve the restoration and upkeep of farms and the environments around White Clay Creek to protect the drinking water.

On a university level, Students for the Environment have participated in volunteer and research projects regarding the health of White Clay Creek and the Chesapeake Bay.

“The group participates in a lot of restoration projects around the White Clay Creek such as doing invasive species cleanups,” Feaster, who is the president of the organization, said.

Undergraduate and graduate students working with the Department of Water Resources at the university conduct frequent water quality testing in White Clay Creek. Using probes to test nitrogen levels, students are out in the field for three to four hours at a time, repeating tests up to 25 times in order to get accurate readings.

SUEZ, the public water provider that supplies drinking water to northern New Castle County, also works to maintain water quality for their near 40,000 customers. Michael Bard, manager of community relations for the company, said that SUEZ works with farmers and communities in Chester County to mitigate the negative impacts of water pollution.

According to Kauffman, Newark has recently begun investing in building new barns and protecting forest habitats near the White Clay Creek and its tributaries, but these processes require time and money. In the meantime, there is still work that needs to be done to provide Newark with clean, healthy water.