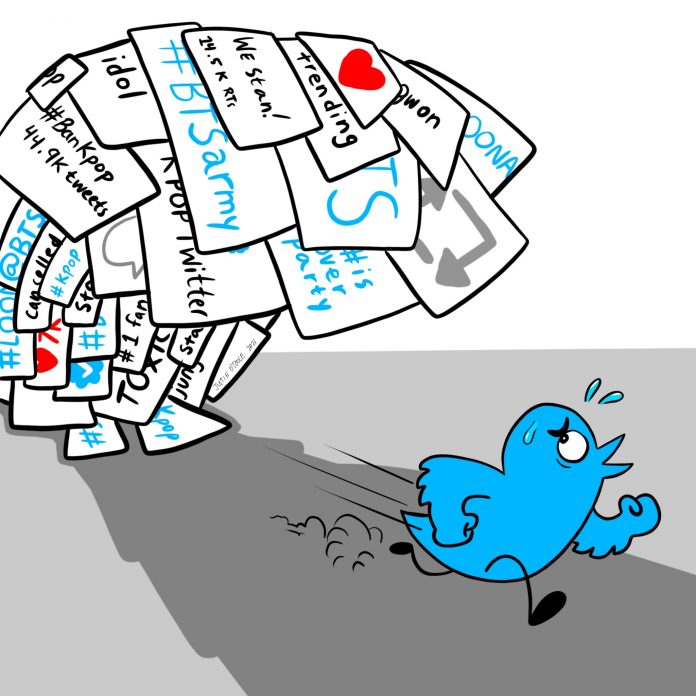 Editor’s Note: A previous version of this article stated that BTS did not issue an apology, when they in fact did. This has since been corrected.

Korean Pop — also known as “K-pop” — is not something new but has begun gaining fame on a global scale in recent years, becoming popularized in the West thanks to groups such as BTS, Blackpink and Exo. There are many important aspects of the K-pop genre, but one of the most important is the relationship between fans, idols and media.

Fandoms are a large part of K-pop fan bases and what comes of fandoms in general is a relatively large load of “toxicity.” Over the last two decades, social media, especially Twitter, has become more popular among fanbases. These sites and apps have become places where fandoms seek out others that share the same interests. The K-pop fandom is extremely prominent on Twitter, and there are some with accounts as old as the platform itself.

Cancel culture, a form of online shaming that shuns problematic celebrities and/or fans, has become ingrained in online culture. Marjorie Taylor Greene, for example, blamed cancel culture for her removal from government office. Online bullying and harassment is a direct result of cancel culture. K-pop fans do not shy away from this idea; cancelling idols and fans alike has become very common on Twitter. In some cases, fans go as far as sending death threats over song discourse or directing massive pile-ons for innocent opinions.

Idols — the men and women who perform in groups or as soloists under the K-pop title — face constant criticism from fans and Korean media. They undergo training before facing the public eye and subjecting themselves to the intensity of the media and super-crazed fans, often called “sasaengs” — fans who stalk and harass idols daily. The same criticism that idols receive can be directed at their fans as well, but they don’t have the training to handle it.

Toxicity found in K-pop fans seems to go above and beyond what I’ve seen from other fan bases. I’ve been a part of many fandoms on Twitter since I was 13, but I started getting into K-pop only about two years ago. Since Twitter introduced a function recently where anyone could read the quote retweets on a tweet, it’s made the toxic mental attitude worse. Typically, viral tweets tend to have more likes than retweets, but when those numbers are flipped, fans call it “ratioing,” a part of the act of cancelling.  Whether the criticism is constructive or negative, a large number of quote retweets circulates that criticism more than a like or reply would. Oftentimes, this fuels anxiety in some fans, triggering panic attacks over the harassment.

Much of the negativity also stems from K-Pop fandom superiority. Fans fight with each other over whose group is less toxic. Fans who seek to defend harmful actions perpetuate the idea of “K-pop over morals.” One recent example is Sowon , a member of K-pop girl-group GFriend , who posted a picture posing with a Nazi mannequin from a museum and received heavy backlash from fans all over the world. However, some of her fans came to her defense, using her nationality as an excuse for her ignorance, but many Koreans disputed this and affirmed that Nazi Germany is part of their schools’ history curriculum. Regardless, other criticisms noted that Sowan is a college educated adult and should know better.

Similarly, years prior, BTS did a photoshoot at a Holocaust Memorial. While Big Hit Entertainment issued an apology following the event, some of their fans still defend the group and their actions. These fans choose to look past the ignorance and the chance to educate others to support someone who possibly hurt others.

Rather than settling on “canceling” both groups, many fans instead engage in “fanwars,” arguing over which group’s actions were worse.

Age is something that is brought up often as an excuse; however, I believe that age might just be to blame. Twitter’s policy is that you must be 13 years or older in order to make an account. K-pop fans’ ages range from young teens to well into someone’s 30s, creating a wide variety of experiences. Younger fans are much more impressionable and are more likely to spread misinformation and bandwagon hate. An example of this would be that kids morals and values are shaped as a child throughout adolescence. Political beliefs can be altered and manipulated at these ages because of the developing brain and the impression these situations make on them. There is a lot of misinformation on Twitter in general, but there is a visible impact on the thought processes within the K-pop community.

Selective exposure, a psychological theory related to media communication that involves individuals’ tendencies to favor information that reinforces their pre-existing views while avoiding contradictory information, also plays a role. Fans oftentimes will ostracize an idol for a situation solely because they don’t like the idol or group based on their own personal views. It doesn’t matter the situation, but they will do anything in their favor to “drag” the idol, creating an uncomfortable online environment.

Fake stories, panic and incorrect quotes spread rapidly and make fans and idols alike create bad online personas. Na Jaemin of NCT Dream was a victim to this back in May of 2020 when a translator account mistranslated a quote from him, claiming he had called a member of his group a slur. This created a significant blow to his image, and many of his non-Korean fans revoked their support for months even after it was cleared up.

However, K-pop isn’t always bad. I’ve had many positive experiences where I haven’t felt judged, and I’ve made many friends through my fandom. There are some deeper rooted issues that repeat themselves and get worse over time, but I believe that this stigma of intimidating K-pop fans, while intense at times, will dwindle away. The toxicity will leave as people grow and mature and fandoms on Twitter just might become enjoyable again.