Lazarus Rising breathes life into job searches for the homeless 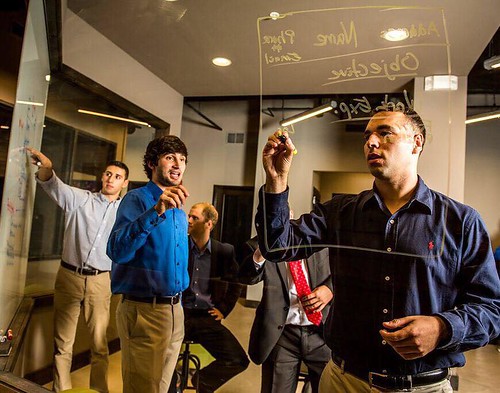 Courtesy of Matt Rojas
The Lazarus Rising team is working towards spreading their organization to all fifty states.

During his freshman year, Matt Rojas, now a junior economics major, asked his friend Dave, a fellow participant in the Munson Fellows Program, to look over his resumé. Rojas was surprised when Dave tore it to pieces.

“I asked how he knew so much about constructing a resumé, and he said it was just by virtue of being a college student,” Rojas said. “We’re always applying to jobs.”

As a student at a well-endowed research institution, he recognized that students often take for granted the resources they have at their disposal when it comes to applying for jobs. Rojas wanted to share these resources with the homeless communities around Newark, knowing they needed them more than he did. Bringing Dave and some of his friends along, they went to a local shelter and helped two participants write a resumé.

Following up a few weeks later, Rojas discovered that of the two participants that day, one of them had gotten a job with the resumé that they made, and the trend continued. The foundation for Lazarus Rising was set.

Realizing the impact his project had on the homeless community, Rojas did some research on the issue of homelessness in the United States.

“There are 3 ½ million homeless people in the United States,” Rojas said. “One in every five is considered chronically homeless, which is when an individual is homeless for over one year. There is a lack of meaningful employment due to a lack of simple resources such as a resumé, proper interviewing techniques, and the ability to apply to jobs online.”

Rojas explained that a project like this works because college students are remarkably fluent with the job application process; they are constantly applying to internships and jobs. They also spend a lot of time doing volunteer work, which essentially leads to a zero cost operational model.

He calls it, “skilled volunteerism” or, “mission driven labor.” Students are assisting with a process that they know well, which Rojas said allows for a unique formula for success.

One in every three obtain employment within the month.

“It was nerve-wracking at first, but it was a pleasant and easy going experience,” Rojas said. “Everyone was super friendly and super excited. Altruism is foreign to them. Due to circumstances in their lives, no one has gone out of their way to help them.”

As the project expanded, Matt Rojas asked Matt Sobel to join him as COO. Nate Hamilton and Eric Albers also joined the project as Chief Technology Officer and the UD Chapter President, respectively.

This past summer, Lazarus Rising became a 501 c3 tax deductible nonprofit organization. Since its beginning about a year and a half ago, the organization has spread to four chapters in New York and one in Chicago with the intention of spreading to Kentucky, Philadelphia, Baltimore, Washington D.C., Atlanta and others.

Sobel and Rojas did not envision themselves becoming involved in the nonprofit sector when entering college as freshmen, let alone starting their own organization. Sobel explained that the experience has changed his perspective on who he is as a person, and what his goals are.

“I wanted to do banking when I came to college,” Sobel said. “I wanted to be what you imagine a banker to be—interested in succeeding and making a lot of money. I was very motivated to win and be competitive. I felt like something was lacking, like I wasn’t doing my job even though I already had a lot on my plate, but when I got involved in the project spring of freshman year, I knew my life had changed. There was more to life than balance sheets and financial statements.”

Senior accounting major and Chief Financial Officer, Jim Celia handles the financial and legal aspects of the non-profit. He explained that Lazarus Rising receives funding as a registered student organization (RSO), which covers the cost of travel and other expenses, which are minimal due to the volunteer model of the organization.

Celia joined the project to help Rojas and Sobel expand Lazarus Rising to other states. Like their experiences, his has also been a fulfilling one.

“This is what we’re fighting through textbooks for,” Celia said. “We’re using what we’ve learned and our resources to fight the economic disparity in a constructive way.”

As of now, Lazarus Rising faces two challenges: expansion and sustainability. Rojas reached out to B.J. Douglass, the Senior Project Officer at the Center for Faith Based and Neighborhood Partnerships, an office of the U.S. Department of Housing and Urban Development (HUD).

“Cold-calling shelters has worked so far, but we’re looking for something more efficient,” Rojas said. “B.J. Douglass loved the program, and said they (HUD) might potentially make it a pilot program.”

Sobel said that if HUD adopts the project it will help alleviate the problem of finding shelters and universities. It will expedite the process of expanding across the country and increase the impact of the organization’s efforts.

“Instead of cold calling, we can use HUD’s resources to find what shelters they’re involved with and officially become part of their program,” Sobel said.

Lazarus Rising will be honored by the governor on Nov. 12 for its efforts. Rojas and Sobel will find out soon whether or not a partnership with HUD is in their future.