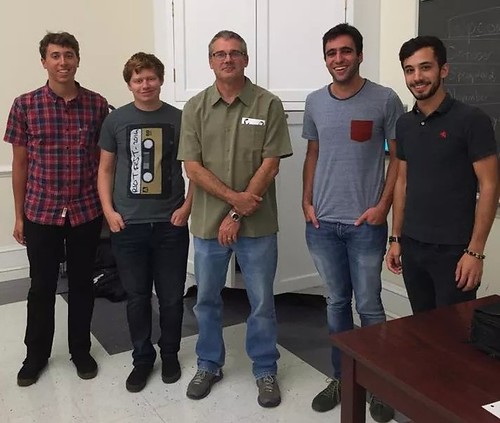 Milo Aukerman acknowledges the abnormality of his two particular careers. But what is a man to do when passionate about both music and science?

Aukerman, an adjunct professor at the university, is the lead singer of punk band the Descendents and a plant researcher for DuPont. Aukerman spoke of his journey on Tuesday night to an audience of nearly 60 people at a Take the Mic-sponsored event in Gore Hall.

“I’m at the age now where you start to look back and be all nostalgic,” Aukerman says. “I think the period of punk rock music that I grew up in, I feel like it’s worthy of being nostalgic.”

Aukerman spent his early years in Manhattan Beach, Calif. He attributes the origin of punk rock bands such as the Last and Black Flag to suburban beach lifestyle, and surmises that the mundaneness of suburbia might have fueled their rise in that area.

The Descendents took inspiration especially from Black Flag, and began in 1978 as a punk rock band of similar style. Shortly after Aukerman’s involvement the band changed its sound.

In subsequent years Aukerman toured with the band, finished college and graduate school, moved to Wisconsin and married his wife. He alternated his focus between music and science.

“I bounce off of each of these things on my own whim,” he says. “It seems to make me more whole of a person to do both.”

Aukerman’s family, including his two children, support his continued musical involvement.
“It was almost like they were giving me the thumbs-up to play more music, and that was perfect for me,” he said.

“I’m heavily involved in booking and more of the local scene,” Elfers says. “That’s where the people are who are going to be most into it.”

Aukerman’s involvement with the Descendents happened nearly by accident when he bought their record from drummer Bill Stevenson, his best friend in high school.

“I bought it, I listened to it, I thought it was great,” Aukerman says.

He says he started watching the band practice and eventually sang with them in what functioned as an impromptu audition.

Shortly after, Stevenson asked Aukerman to join the band. In 1981 they recorded “Fat” which – unsurprisingly – featured many songs about food.

Around the same time, Aukerman’s interest in science blossomed as a result of a class project about DNA. He decided he wanted to become a scientist, and enrolled at UC San Diego in 1982. The Descendents recorded Milo Goes to College in acknowledgement of his admission.

While in San Diego, Aukerman heard the full album for the first time at a stranger’s house. A neighbor told him of a friend who had the record.

“I hadn’t even heard it yet, I had only heard the rough mixes so I walked over to his house and heard my record,” he says. “To hear my own voice on a record was pretty weird.”

In 1999, after an intense period of music including what Aukerman estimates to be about 250 shows in one year, he finished his postdoc, came to Delaware and began working for DuPont.

The Descendents have not produced a new album since 2004, but Aukerman still travels intermittently to perform. He describes the band’s get-togethers as family reunions.
Freshman Charlotte Shreve asked about the homegrown nature of Aukerman’s music career, and Aukerman affirmed the legitimacy of DIY culture.

“It may be more valid than working with a label,” he says.

Shreve also admired Aukerman’s ability to successfully balance two separate fields.
“As someone who’s interested in punk rock and science, that made me happy to see there are people like that out there who maintain those two really different interests,” she says.

Aukerman says he expects music to be a permanent fixture in his life.

“I’ll probably never get out of music,” Aukerman says. “It’s something that, you know, rejuvenates me when I’m feeling completely jaded with life.”

“Small towns can have just as vibrant a scene as big towns,” he says. “You gotta keep the local music going.”