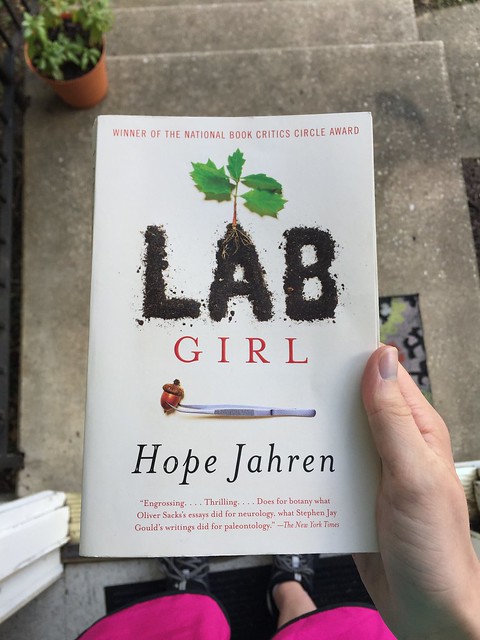 I approached “Lab Girl,” the 2018 First Year Common Reader, with a bit of dread. Hope Jahren is a blue-chip geobiologist. Three Fulbright awards, Young Scientist awards from both the American Geophysical Union and Geological Society of America and recognition by “Popular Science” and “Time” as an influential scientist.

Suddenly, being the speaker at my high school graduation doesn’t feel like as big of a deal as my mom likes to make it out to be. My mom hasn’t let me weed the garden for years. This is because I thought it would be a fine idea to indiscriminately pull out anything that is green. (Disclaimer: I was four and also had a habit of eating worms.)

But in all seriousness, my trepidation came from a very real place. As someone who studies the humanities, I often feel the tight grasp of the science, technology, engineering and math agenda. But Jahren uses the humanities to paint poetic portraits of flora.

“A leaf is a platter of pigment strung with vascular lace,” Jahren writes.

‘Leaf,’ ‘pigment,’ and ‘vascular’ are coupled with ‘platter’ and ‘lace,’ imbuing the scientific unfamiliar with the cherished familiar. Throughout “Lab Girl,” Jahren twirls dense, indigestible material into lyrical fables; “[a] tree’s wood is also its memoir.”

But for every time Jahren snaps to her writer self, she snaps back to her scientist self. To organize “Lab Girl,” Jahren exploits the life history of a tree: as a seed, finding a place to sprout; as a sapling, finding the room to bud; and as an adult, finding the resources to bloom and bear fruit. By jumbling chapters about the life cycle of trees and chapters about her own coming-of-age as a scientist, Jahren employs a kind of “Trees—They’re Just Like Us” gambit.

Today, Jahren is a professor of geobiology at the University of Oslo. But like most memoirs, “Lab Girl” begins in the past. I found myself dumped in a small Minnesota town filled with stoic hushes. Jahren found comfort in the laboratory of her father, who taught introductory physics and earth science at a local community college. The rest of “Lab Girl” serves as a reflection on the forces that inspired — and frustrated — Jahren’s journey from steely Minnesota to California, Atlanta, Baltimore and Hawaii.

But as much as “Lab Girl” is a coming-of-age story, it is also the story of two lab partners and their peculiar bond. As a graduate school teaching assistant at University of California, Berkeley, Jahren meets Bill. Their coupling transcends classification; at times, it resembles mother-son; at others, brother-sister. It’s a great love affair, despite Jahren and Bill never being lovers.

Here’s where I suggest undergraduate students who aspire to join the the ranks of academia read “Lab Girl.” Jahren contends that even “the best and hardest-working scientist” like Bill “has no long-term job security.” Stories of 3 a.m. grant writing and pinching pennies are in line with the rhythm of undergraduate students, but seldom told in the world of academia. The path to becoming a scientist is sowed with unremitting financial anguish.

Jahren also does good work for undergraduate students who aspire to join the the ranks of academia by bringing light to the mental health catastrophe that leaches just under the surface of academia.

“Full-blown mania lets you see the other side of death,” Jahren writes. “Its onset is profoundly visceral and unexpected, no matter how many times you’ve been through it. It is your body that first senses the urgency of a new world about to bloom.”

But if Jahren does a disservice to anyone in “Lab Girl,” it’s women. Jahren feels constantly belittled by male scientists, but offers only spliced vignettes — no factual evidence of gender bias. When Jahren becomes the first woman in her department at Johns Hopkins University to go on maternity leave, she believes she has been banned from visiting her lab. Probably true, but Jahren does nothing to back up her belief with cold hard facts. Yes, academia abounds with sexism, but without fully exhibiting this, Jahren misses the mark.

“Lab Girl” is a tender memoir. But it’s going to take more to allay the slant that academia is just for boys.