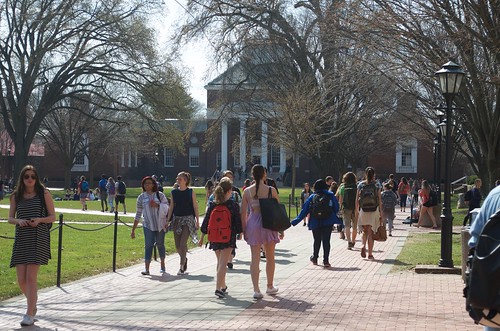 In an attempt to make college campuses safer Delaware legislators proposed a bill that would have required reporting of university sexual assaults to police. It received so much negative feedback that legislators worked to change it, recently revealing a revised version of the bill.

The goal was to make sure that colleges and universities in Delaware are not sweeping these cases under the rug. Obviously, no school wants to have a bad record when it comes to sexual assaults because then people would not be willing to send their children there, Peterson said.

“We felt that the way the reporting system worked within the colleges and universities, was that the first person you would report to would be a college employee, and we felt that in some of those cases people were perhaps being talked out of bringing criminal charges,” she said.

This is why the original bill then required school employees, when an incident was reported to them, to be required to report it to the police, she said. After the bill’s proposal the sponsors of the bill had women from the university come to them expressing strong objections to mandatory reporting to the police.

“They feel that the police handles these cases badly, which I agree,” Peterson said.

When Peterson was a student at the university, she was a victim of sexual assault.

“When I called the police, the police said to me ‘why do you wanna ruin the guy’s life?’” she said. “And I was young, you know, and they made me feel like I was victimizing him if I press charges. So I didn’t. I’d like to think we’ve come a long way since then, but from what these women told us it’s not necessarily the case.”

Sage Carson, a junior anthropology and women and gender studies major, was one of the women who voiced her objections. Carson was consulted for the original bill and strongly opposed it. She started a Change.org petition in opposition to the bill, which garnered student support. She said she is pleased with the revisions to the bill.

“It’s hard for me to say where I stand on the bill now, it’s kind of a reiteration of a lot of pieces of legislation that are already in place,” Carson said. “I think there could be some benefits to it in the next upcoming bits of working on it.”

The bill was revised to remove mandatory reporting to the police and instead requires that designated, responsible employees, when given a report of sexual violence, take certain steps to ensure the victims are aware of their rights. The employee must also offer to report the case to the police.

Offering to report for students is not really going to change much unless students take advantage of that, Carson said. The bill could be focused more on our idea of education, who needs to receive education, and what that education needs to look like, she said.

The bill also requires that schools report all cases of sexual assault. Not in detail or by name, but they have to prepare annual reports of every single case that is brought to them. The schools also have to set up specific procedures for the reports, Peterson said.

“We just want to know how many, because that’s a barometer of the culture,” she said.

In a meeting held the other week in Dover with all the Title IX coordinators from colleges and universities in Delaware, these procedures were created, Peterson said. Some of the schools do a much better job than others, while the university’s policy, although lengthy, is not one of those over-performing schools. Peterson said she is “not exactly thrilled with it” because some questions were raised about third party complaints, she said.

“We’re not asking to release any details of the case. We just want assurance that somebody didn’t take the complaint and throw it around and put it in the trashcan,” Peterson said.

The university said in a statement that it commends the legislature for focusing its attention on the incredibly important topic of misconduct on college campuses.

“We look forward to collaborating with legislators as the bill works its way through the legislative process,” it said.

The bill is expected to be brought up in the House of Representatives next week, Peterson said. If it passes, which it should, then it will go into committee in the Senate. When it comes out of committee, Peterson can put it on the agenda for vote.