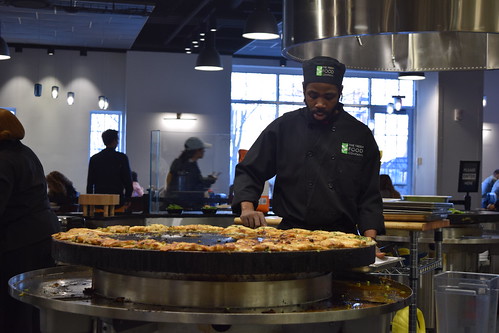 The unexplained “Meatless Monday” hiatus began shortly after a university agriculture professor wrote to the vice president of Dining Services to alter the name of the movement, despite its previous approval at the beginning of spring semester.

Agriculture professor Lesa Griffiths contacted Dining Services in a letter about the name the university was using to describe the day with more meat-free options.

Griffiths said dining hall services should name the movement after what they’re celebrating and taking the “Meatless Monday” pledge is sending a message to students that consuming meat for a well-balanced diet is cruel and inhumane.

“Rather than choosing a name that disparages and offends any one of those students, why not choose a name that is accurate,” she said. “Perhaps consider names like ‘Eat Their Veggies Day’ rather than a name that is offensive to these other groups of students on campus.”

Students who venture to take the Humane League’s “Meatless Monday” pledge are greeted with a hateful animal rights message, Griffiths said. The health and sustainability message takes a backseat, she said.

There are 350 animal science majors at this college and many of them have a passion for animals, Griffiths said.

“I am supportive of more vegetarian and vegan options for students, but I just asked that they renamed the initiative in a more positive and accurate manner,” she said.

Shortly after Griffith’s letter was sent, the movement was retracted from the university’s dining hall system. The marketing director for Dining Services, Ryan Boyer, stated in an email that there have been some changes in the university’s use of “Meatless Monday” around campus, but it has yet to reappear in a new form.

Clarke’ Snell, president of the registered student organization, Veg Club, said for the first few weeks of the semester she partnered her club with Dining Services to promote meat-free options and had great success.

“Take small steps,” Snell said. “Changing your plate is something that every single student can change and make huge strides while doing it.”

One of Griffiths’ students, who wished to remain anonymous, was bothered by their professor’s efforts to take “Meatless Monday” out of the dining halls. The student said what bothered them about the situation was the secretive nature of having it removed.

“It just made me think about when another professor of mine said you have to be careful with Ag students because they will take it as an attack,” the student said. “I didn’t think that would be true because I am an Ag student and totally identify with the Humane League side of it all.”

Madison Clements, an animal food science major and Humane League Campus Organizer, agreed and wanted to set things straight about what the movement’s intention was on campus.

“Our goal is NOT [sic] to make people feel bad about their eating decisions, but rather to educate people enough to allow them to make a more informed decision regarding their meat consumption,” Clements stated in an email.

The American Heart Association’s website suggests going meatless for a day by saying, “meatless meals won’t require you to give up your carnivorous ways. You can still eat lean meat — just less of it.”

“This is what we strive for in our campaign,” Clements said.

Despite this, Snell describes how all students can use more meat-conscious practices on a daily basis without threatening the Ag students and also advocating for sustainability.

“Agriculture is still going to be a relative field,” Snell said. “It’s not just about animals, we need plants and alternative food sciences. We need farms. We need people who will benefit the land and know how to produce food. You can make changes to your lifestyle while still balancing your chosen career.”