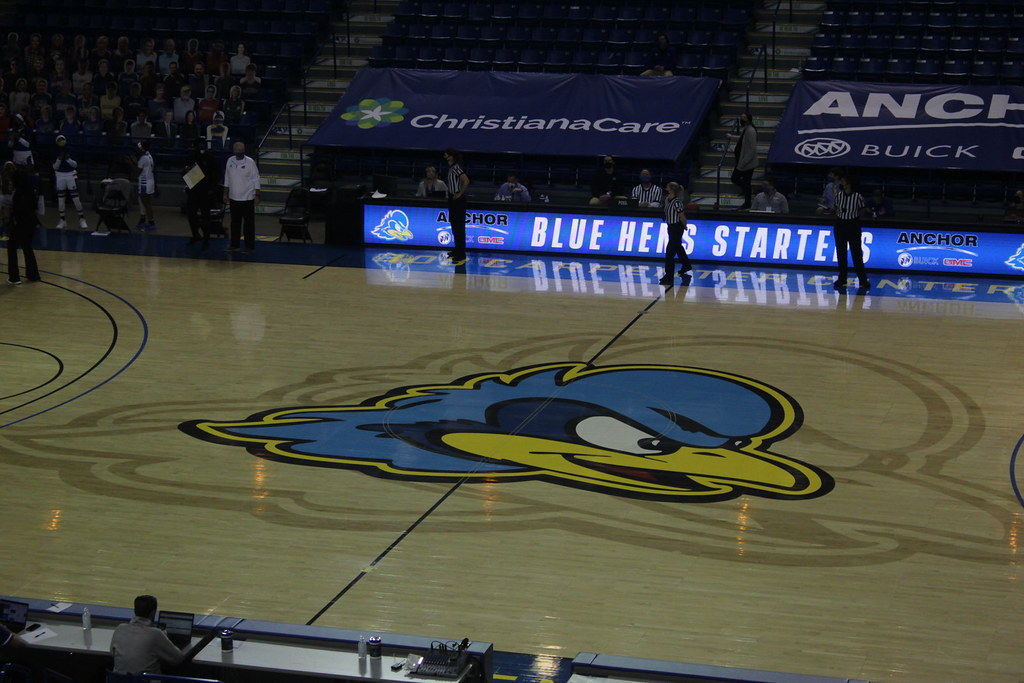 Patrick LaPorte/THE
REVIEW
The Blue Hens held off Salem University to win their first game of the season.

On Saturday, the Blue Hens defeated the Salem Tigers in an empty Bob Carpenter Center by a score of 79-76 to start the season off 1-0.

With no fans in attendance due to COVID-19 protocols, the Blue Hens had to provide the energy themselves. The new look Blue Hens quickly got out on top, but Salem would stick around all afternoon.

The Blue Hens lost two key players after last season, with Nate Darling declaring for the NBA Draft and Justyn Mutts transferring to Virginia Tech. With two starting positions and many valuable minutes up for grabs, the Blue Hens would need someone to step up.

Ebby Asamoah stepped up for the Blue Hens in a big way on Saturday, finishing the game with 20 points and six assists. Asamoah shot a career best 6-8 from beyond the arch, setting the tone for a great shooting day for the entire team. The breakout day for Asamoah was a promising sight for the Blue Hens but did not come as a surprise according to his teammates.

“Ebby’s a great shooter who worked really hard over the summer, and I have a lot of confidence in him,” senior guard Kevin Anderson told bluehens.com.

The game was a battle beyond the three-point line as both teams chose to live or die by the three pointer. Salem started off the game forcing three pointers to compensate for a clear disadvantage in size in the frontcourt.

The Blue Hens led by as much as 18 at one point, but Salem would continue to rely on the three pointer to stick around.

In the second half, Delaware continued to keep the lead up until a huge run by Salem. With 7:45 left in the game, the Blue Hens shooting would go cold, and Salem would go on a 15-0 run to tie the game at 70.

Salem played much of the game utilizing a defensive 2-3 zone, which Delaware was able to exploit in the first half. Down the stretch, the Blue Hens struggled against the stout Salem defense, turning the ball over six times during the 15-0 Salem run.

Delaware was able to hold off the Salem comeback attempt with the help of two clutch three pointers by Asamoah and Anderson. The Blue Hens had a great day from beyond the arch, finishing the day 16-31 from three.

Anderson recorded a double-double in the game, finishing with 21 points and 10 rebounds. However, Anderson did struggle with turnovers, recording a team high of eight.

The Blue Hens controlled most of the game and luckily, came out on top despite the comeback. The mistakes that let Salem get back into the game are certainly fixable, and it is something Coach Martin Ingelsby will take a look at.

“We need to improve in a lot of areas,” Ingelsby said to bluehens.com. “Tip your hat to Salem; we got careless with the basketball and gave them some confidence. We got into a good rhythm in the first half against their zone but got stagnant in the second half. We had a bit of rust on both ends of the floor; we’ll get back to practice, watch film and learn from this.”

Delaware will have a busy week, as they take on University of Maryland, Baltimore County (UMBC) on Dec. 8 and George Washington on Dec. 11.