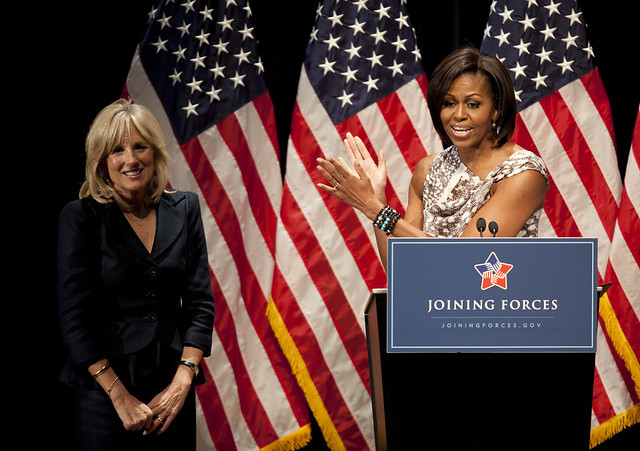 When she walked onstage, roaring cheers drowned out the idle chit chat that had filled the auditorium. Smartphones and iPads polluted the air, which made it impossible to see or hear anything that was happening on stage. Audience members waved their miniature American flags with fervor as others pulled and pointed at their “I’m with Her” shirts.

For those who did not have a front row view, the chaos only confirmed that Michelle Obama had walked onto the makeshift stage in the Tom Gola Arena at La Salle University. The first lady came to Philadelphia on Wednesday to campaign for candidates Hillary Clinton and Tim Kaine.

Obama prompted the audience to make it a priority to go and vote on November 8th. The enthusiastic cheers that reverberated in the gymnasium indicated the audience already was willing to do just that.

“If you vote for someone other than Hillary, or if you do not vote at all, then you are helping Hillary’s opponent and the stakes are far too high to take that chance,” Obama said.

Obama never mentioned Republican candidate Donald Trump by name, but made several comments clearly directed toward his campaign. She addressed some of his statements from the debate Monday night, including the discussion about the legitimacy of her husband’s birthplace.

For the past eight years, President Barack Obama and his family have dealt with accusations that he is not a natural-born citizen. These are “hateful, hurtful comments,” Obama said.

She did not address Trump’s accusation from Monday night that Clinton’s primary campaign in 2008 supported the birther rumors by releasing photos of him in Somali dress and sending a staff member to Kenya to further investigate.

During last Monday’s debate, Lester Holt had Trump address a comment he made about Clinton lacking the presidential “look.” Trump then denied having said that, claiming he believed she lacked the “stamina” to be president. Obama mentioned these comments in her speech as well.

“For those of you who question her ‘stamina’ to be president, Hillary is tough,” Obama said. “When she gets knocked down, she comes back stronger for the people who need her most.”

Also at the event to endorse Clinton was Pennsylvania State Senator Art Haywood, who spoke on a range of prominent issues including raising minimum wage, lowering college tuition and tackling racism in America.

“I trust that Hillary Clinton recognizes that black lives matter,” Haywood said. “We can stop the rise of racism and hate, or we can release it.”

Josh Shapiro, attorney general candidate, also made an appearance, where he discussed the importance of maintaining the ‘first lady manners’ during this campaign and echoing the Clinton campaign’s now signature moniker: ‘When they go low, we go high.’

All the speakers emphasized the importance of voting in this election, particularly directing their message toward the many young people in attendance. As audience members exited the event, campaign volunteers were ready with clipboards to register people to vote or sign up additional campaign volunteers.

“Right now we have the opportunity to elect one of the most qualified people to run for president,” Obama said. “No one has had as much exposure to the presidency. Not Barack, not Bill, nobody. And yes, she happens to be a woman.”

Tim Kaine, Clinton’s running mate, will be campaigning in Philadelphia on Wednesday, the day after the vice presidential debate. The event will be hosted at the Sheet Metal Workers’ Union 19 Hall, where he will primarily address concerns about the economy.