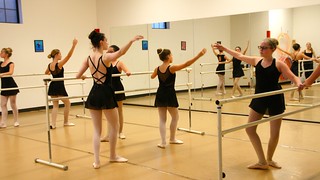 Benjamin Strong was four years old when ballet captivated him. While watching a PBS special of “A Midsummer Night’s Dream” he slowly became fascinated with the dancers, taken aback by their beauty. Determined to become a dancer himself, Strong enrolled in the ballet camp at Newark’s Mid-Atlantic Ballet (MAB) conservatory that very summer where he has danced for 11 years.

At the Mid-Atlantic Ballet located on Main Street, dancers aged 4 to 18 are taught ballet styles that blend English, Russian and American philosophies. Though the company typically performs a different show every April, MAB has consistently performed the Christmas holiday classic, “The Nutcracker,” for the past 12 years.

Under the artistic direction of Patrick Korstange, seven upper-level dancers, six apprentice-level dancers and 15 to 20 “trainees” come together to tell the story of Clara’s journey through the land of the sugar plum fairies. Nearly 1,000 community members, family and friends join the dancers in their tale every year.

Although the ballet was originally cast aside for its commercialization, Korstange says he wanted to bring it back as a holiday tradition. With new students enrolling in the classes each year, he also says that it’s easy to change things up with a different cast and add elements to make it more exciting for viewers.

Strong, now 15, admits that after years of performing “The Nutcracker,” it can get redundant for the dancers, but that it is worth it in the end, since audience members have grown attached to it.

“For Christmas time, I feel like nothing can ever really replace ‘The Nutcracker,’” Strong says. “The music by Tchaikovsky is unreal. He was an incredible composer, and I feel like it would be a dishonor to play anything else during the holiday season.”

To promote the show, Strong has donned the nutcracker costume within the community. He says that “prime-time ‘Nutcracker’ time” is on Community Day, Newark Day and during Winter Fest, and he enjoys surprising young passersby.

Although it is a large commitment, Strong says he could not imagine his life without ballet, and Korstange is a central figure in making his ultimate goal of dancing professionally possible.

“He’s just such a great person,” Strong says. “He pushes me so hard, and while there’s some nights I really just want to throw in the towel and not come back to class the next day, I love it because he just challenges me, and I know that what he’s trying to do is make me better.”

Korstange began his own professional career in 1986 as a principal dancer with the Miami City Ballet. He later worked with several modern dance companies and made his connection with then director of MAB, guest teaching at the conservatory. He began teaching full time and assumed his role as artistic director in 2008.

“I enjoy teaching,” Korstange says.“It’s very fulfilling to watch because with most teachers you have one grade, and you get to see them for one year of their life, and then they move on. I get to watch that progression and see them start to make sense of the ballet, find that control and then to find that artistry within the dance.”

MAB board secretary, Kim Nuzzaci, says the ultimate goal of the conservatory is to “make art accessible to the community.” This includes outreach to elementary schools within the Christina School District, in which students learn the history of ballet, watch small performances and even receive vouchers for students and parents to attend the shows.

“The one thing that is really amazing about Patrick is that he, regardless of the dancer and their body type, wants them to be the best dancer they can possibly be,” she says.

In 2012, the conservatory faced monetary struggles and many parents, staff and the eight board members feared its potential close. Through perseverance, the group reformed long-lost committees and strived to revitalize the studio.

As a nonprofit organization, MAB relies heavily on donation and grant money. Chuck Halfen, board president and grant committee member, says grant applications are vital to the company’s success, and since parents can only donate so much money on top of tuition, it is important they also remain active in fundraising.

With help from The Longwood Foundation, the board was able to give the studio a facelift, adding cabinets in the reception area, new furniture and a fresh paint job. The conservatory has also worked with the Delaware Division of the Arts and the Welfare Foundation and was able to raise $11,000 on their own last year through its Annual Fund.

In efforts to incorporate families into “The Nutcracker” performance, dads that raise the most money can act as The Rat King in the show, which Nuzzaci says was a great way to involve the dads who typically take a back seat to the moms. She also says it did so well last year that the opportunity for dads to perform will be opened to two shows this year, with a first and second place winner.

“One of the things that I think is unique about MAB I think is the family atmosphere,” Nuzzaci says.

Parents, grandparents, parents of former dancers and even local businesses like Caffé Gelato and Jimmy Johns come together to support the group with food and gift certificates.

“Seeing how the community responded to us in our time of need was amazing,” Nuzzaci says. “And just on the personal level it makes me want to support those businesses. That’s something that our families do. We’re constantly talking about make sure we’re supporting our Main Street businesses because they support us—it’s a big deal.”