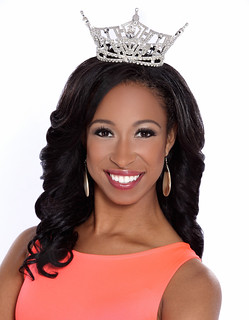 For current Miss Delaware Brittany Lewis, October marks four years and six months since her sister was killed in a domestic violence incident.

Lewis’s sister, Gina Clarke-Lewis, a 27-year-old Temple University student, was involved in an abusive relationship with her fiancée. In March 2010, Clarke-Lewis was shot and killed outside of her New Jersey apartment.

Following the loss of her sister, Lewis, 24, made it her mission to start the conversation about domestic violence. Lewis, whose pageant platform is domestic violence awareness, says although her sister’s death motivated her platform choice, her objective is not just about her sister anymore.

“It’s about the countless other men and women who live in fear every day of their lives as a result of intimate partner violence,” Lewis says.

Her platform is divided into three parts––communication, education and legislation, she says.

To fulfill her communication goal, she travels to college campuses in the tri-state area to talk about her sister’s story, the reality of domestic violence and ways to get help.

One statistic that struck Lewis was that children are twice as likely to become an abuser if they witness violence in their household.

Lewis says reaching out and educating the youth may help break the cycle early. Her efforts include visiting middle schools and high schools to speak with younger audiences about warning signs, teen dating violence and the elements of a healthy relationship.

Lewis has experience interacting with the younger generation. After graduating from Wilmington University with a master’s degree in secondary education, she taught seventh graders for two years at Prestige Academy Charter School in Wilmington.

Lewis says her students, who endure homelessness, extreme poverty and other issues, were negatively labeled as lazy and disinterested. However, she feels these attributes are false. If anything, she says, they are strong and resilient for separating themselves from their personal problems and working on their education.

“I always say my students taught me more than I ever taught them,” she says. “It constantly reminds me to be thankful for the privileges that I received when I was their age.”

In addition to working with Gov. Jack Markell, the Department of Justice’s Domestic Violence Unit and the Delaware Coalition Against Domestic Violence, Lewis reaches out to other politicians and legislators to inform them about domestic violence and to make certain that these leaders have the victims’ best interests at heart.

When she is not promoting her platform, Lewis says the most rewarding part about holding the state title is being a role model and representative for the youth.

“There’s nothing like having a little girl or boy come up to you with their parents and say, ‘Mommy, it’s a real-life princess!’” she says. “To be that role model—moments like that are so surreal.”

But Lewis also wants to shed the misconception that Miss Delaware is about fame and glory. The title is about being of service and doing work for this community to improve society as a whole, she says.

Lewis says the Miss Delaware title has not yet registered with her.

“I don’t think I’m really going to recognize this opportunity and take in all the opportunities that it’s presented for me until the year is over, and I’m looking back, saying, ‘Wow, I was Miss Delaware, and these are all the things I’ve been able to do because of this,’” she says.