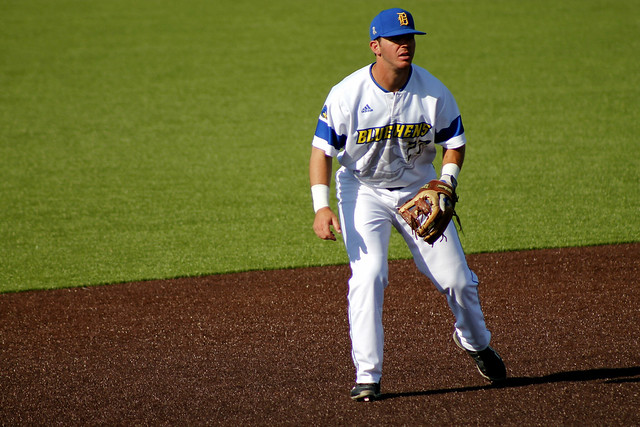 THE REMorgan BrownellVIEW
The baseball team has played impressively all year, led by a small-ball style attack and relying on starting pitching The bullpen, however, has struggled mightly at times.

This season for Delaware’s baseball team has been filled with ups and downs. After losing four straight games between April 15 and April 19, the Blue Hens won four of their next five games, improving their overall record to 25-16. This past weekend, the team looked to continue their strong play in a three-game set against conference opponent William & Mary.

After dropping the opening game 10-0 Friday night, the series wrapped up with Saturday’s doubleheader.

In the first game of the doubleheader, the Blue Hens jumped out to an early lead in the top of the first inning on an RBI single from outfielder Jordan Glover. Delaware added another run in the top of the fourth on a sacrifice fly from infielder Diaz Nardo, making it 2-0.

After surrendering the lead and finding themselves down 3-2 in the top of the eighth inning, the same combination of Glover and Nardo helped the Blue Hens recapture the lead. Glover tied the game at three with an RBI single, and Nardo followed with an RBI double, giving Delaware a 4-3 advantage.

Glover has been a performer for Delaware all year. His two RBIs in the first game of the double header brought his total to 47, which ranks second amongst all CAA hitters. Glover also ranks second in the CAA in doubles, with 19.

The Blue Hens’ lead didn’t last long though. William & Mary responded in a big way, exploding for four runs in the bottom half of the eighth inning, taking a 7-4 lead, and finishing out the game.

In the second game of the doubleheader, Delaware showed their resilience. After dropping the first game, the Blue Hens bounced back with a 4-2 win.

The win was secured by strong performances from several underclassmen. The Blue Hens had strong pitching from sophomore Nick Spadafino, who was making only his second career start. Although Spadafino didn’t end up getting the win, he went five strong innings, giving up just one run. The offense was launched by a solo home run from freshman outfielder Kyle Baker, the first of his collegiate career.

After William & Mary tied the game at one, Delaware would go ahead for good, scoring two runs in the bottom half of the sixth inning.

“It was bittersweet today with the split with us having the opportunity to win both games,” Head Coach Jim Sherman said. “I was proud of our young guys today.”

With the William & Mary series complete, the Blue Hens will play a non-conference game against Saint Joseph’s University on Tuesday, followed by a critical three-game set over the weekend against conference opponent Elon.

“We are alive for a playoff spot, and we feel good about next weekend versus Elon,” Sherman said.

The Blue Hens currently sit in eighth place in the CAA, but with a few wins in conference play, they can get right back in the thick of things. They will look to use a blend of contributions from underclassmen and upperclassmen to finish the season on a high note and secure a playoff spot.