“Move with the currents”: City locals and officials react to the flood of students into Newark 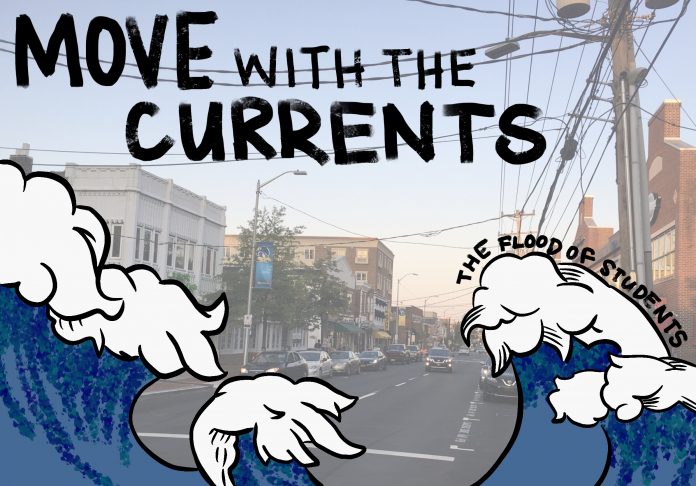 For the past nearly 17 months, Newark locals have had a break from the usual crowd of university students, resulting in less traffic and less wait at their favorite restaurants on Main Street. Awaiting the return of the full student population this fall, city locals and officials face a mixture of emotions.

“The university students add to the vibrancy of the Newark area,” Clifton said. “And the bottom line is … the University of Delaware and moreover the student base is the economic development engine of Newark.”

The absence of the full student body over the past year and half has left many businesses in Newark, particularly on Main Street, to just barely survive on razor-thin margins and for some, to completely shut down.

The pandemic saw the shutdown of numerous Main Street businesses — Panera Bread, Cheeburger, Pachamama, the Indian Sizzler and more. However, the arrival of students to Newark has also brought with it a string of new businesses to Main Street including The Little French Café, Rooted on Main and Hamilton’s on Main.

Though students may bring this “vibrancy” and their wallets, locals and officials also do feel some concern about how the student body may affect the city’s COVID-19 situation.

“There’s also the fear that you have students coming from every area of the nation and possibly quite a few areas of the world,” Clifton said. “I think it’s safe to say that I don’t know that the university could reasonably do anything more than what they are doing to keep COVID and the variants from spreading, but it’s really just going to be a matter of waiting and seeing what’s happening.”

Denise Russell Levering, a lifelong resident of Newark and university alumna, also feels an anxiousness about the students’ return that she did not feel just a couple of months ago.

“I’m a little nervous about them coming back,” Russell Levering said.

It is currently unclear whether the most recent city ordinance, which bars private gatherings of more than ten people indoors and 20 people outdoors, will automatically go back into effect if the city reaches 125 cases per 100,000 people or if the city government will adjust or entirely eliminate the ordinance.

“I think what Newark did last year clearly helped stem the proliferation of COVID,” Clifton said. “And if that’s what we have to do again this year — it’s my worst scenario quite frankly to have to do that — but to keep people safe I would do what we need to do and I hope council follows suit on that.”

As for right now, City councilwoman Dwendolyn Creecy said she “[feels] quite comfortable with the students gathering” due to the mandates and protocols on campus, but the City Council should “play it by ear if [the] numbers start to uptick.”

“Move with the currents,” Creecy said. “If [they start] to tick up, then we need to tighten up our rules … The rules can be rewritten, but they still need to be in place to protect you.”

City councilman Jason Lawhorn, however, believes that the ordinance needs to be entirely eliminated.

“That ordinance is extremely aggressive … I don’t think the limits we have in there would be appropriate anymore,” Lawhorn said.

Even beyond COVID-19, the same community concerns regarding the return of students have resurfaced from past years about partying and noise in residential areas and crowding on Main Street.

“I think the hard thing … for most Newark residents is that it’s kind of been a vacation in that students haven’t been around and so [it has] become almost a new normal for people,” Russell Levering said. “A lot of people …  they avoid Main Street … and basically don’t go downtown because there’s so many students and it’s crowded.”

She noted that the return of students is undoubtedly good for the economy, but she is not looking forward to the “drunk kids” walking down South Chapel Street as she is trying to drive home.

“I want the students to enjoy themselves and to think of the city and their neighbors as family members … and to be just as cordial to them as they would to their own family,” Creecy said.