During his talk, Bouie touched upon reparations, Twitter, the Electoral College and the Democratic presidential primaries. Although it did not dominate the conversation, most of the evening’s talk revolved around the recent news of a formal impeachment inquiry against U.S. President Donald J. Trump.

“It’s very striking, right?” Bouie said. “The timeline as we have it is that, in the summer, [Robert] Mueller gives his testimony, it kind of falls flat a little bit. All the controversy, all the, ‘Maybe Trump gets impeached over the Mueller report,’ fades away.”

Organized by the Center for Political Communication and hosted by its director, Dr. Lindsay Hoffman, the ninth annual installment of the Nation Agenda Series endeavors to reflect on the state of democracy in the United States via a six-person speaker series.

As a columnist, writer, CBS News political analyst and former Slate magazine chief political correspondent, Bouie seeks to understand and analyze current events through a historical lens and the distinctly 21st century context of social media. Bouie’s writings and commentary on national politics, public policy and race have also appeared in The Atlantic, The Washington Post and the New Yorker, among other publications.

The long-anticipated report given by Special Counsel Robert Mueller — officially titled, the “Report on the Investigation into Russian Interference in the 2016 Presidential Election” — was first submitted to U.S. Attorney General William Barr this past March before its public release as a redacted version the following April. The investigation, led by Mueller, notably did not conclude whether or not the president had committed a crime, but further qualified that the investigation findings did not exonerate him, ultimately leaving the possibility of impeachment as an open case. Mueller believed that a Nixon-era U.S. Justice Department policy prevents a sitting president from being indicted on criminal charges. Critics note that this policy did not preclude Mueller from concluding in his report whether or not Trump’s actions constitute a crime.

The first half of the report indicated that attempts had been made by the Trump campaign to receive political assistance from individuals associated with the Russian government. The latter half painted a picture of a White House in which Trump continuously made efforts to interfere with the investigations of James Comey, then the head of the Federal Bureau of Investigation, and Mueller. The report concludes that Trump’s attempts to interfere with or outright end Mueller’s investigation, of which he was a person of interest, were often thwarted by White House officials.

“The president [Trump] has a conversation with the President of Ukraine, who, it should be said, is a former sitcom actor who is the star of a sitcom about an ordinary man becoming president,” Bouie said, referring to the Ukranian comedy television series “Servant of the People.” “When I think about that and I think about our president being star of ‘The Apprentice,’ I wonder if television was a bad idea.”

On Sept. 24, Speaker of the House Nancy Pelosi announced that six committees would open formal impeachment inquiries after reports of controversial interactions between President Trump and Ukrainian President Volodymyr Zelensky.

“He contacts the president of Ukraine to solicit dirt on one of his political opponents, to basically do the thing that he had been accused of doing,” Bouie said. “Part of what is happening in the political world is essentially everyone trying to get over the shock of that fact. Here is a president who has not learned anything. Who, in fact, may have been emboldened by the fact that he saw no immediate consequences in the wake of the Mueller report. So he’s trying again to recreate the conditions of 2016.”

The announcement marks the fourth time in U.S. history that a formal impeachment process has been undertaken against a sitting president. Although impeachment has historically been an extraordinarily rare measure, Bouie qualified that, given specific circumstances, it may serve as an appropriate and necessary remedy.

Bouie proceeded to argue that, although thoughts on the politics of and precedents for impeachment tend to fall upon the more recent presidencies of Bill Clinton and Richard Nixon, the relevant precedent for the current inquiry on Trump traces back to the first case of the impeachment of an American president: that of Andrew Johnson, the 17th president of the United States, in 1868. 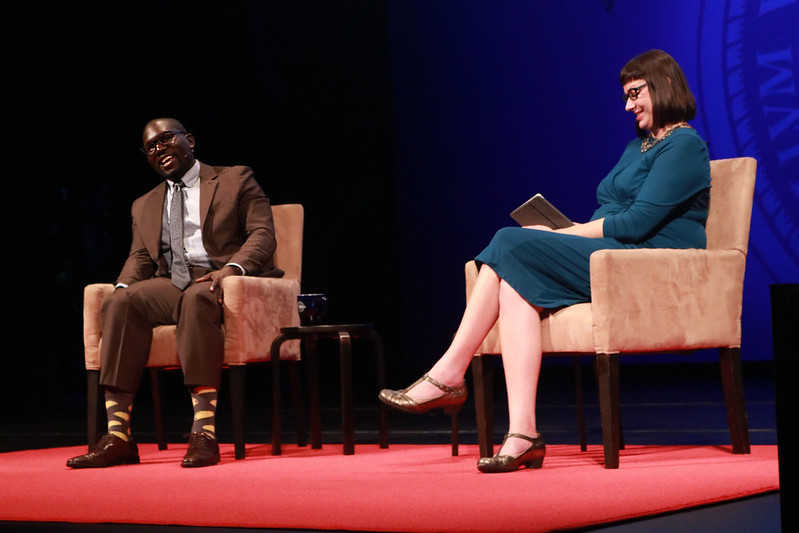 “Technically he was impeached for a law called the Tenure of Office Act,” Bouie said. “But the real reason was that, for the past two, three years, Johnson had been a foe of Reconstruction.”

Bouie continued to list the ways Johnson had stymied the efforts to reconstruct the South and to extend voting rights to African Americans, and how he had turned a blind eye to vigilante violence, and to racial violence against African Americans.

“He had essentially become an ally of the former Confederates,” Bouie said.

The parallels, Bouie argued, are clear. In that, between Johnson and Trump, the formal justifications for impeachment may both serve as a pretext for what is perhaps more self-evident: that the office of the presidency was abused to incite, to divide and to stir hatred.

“The real reason [Trump] will be impeached is basically for violating one of the core premises of the modern United States, which is that we are a multiracial democracy,” Bouie said. “We are a democracy where everyone has a claim to equality. And Trump has vocally, I think, stood against that in a similar way as Johnson did.”

The subject of impeachment resurfaced throughout the rest of the night, which later included a question and answer section where one question posed to Bouie asked how impeachment proceedings might affect Trump’s campaign in the long run.

“Something that’s been talked a lot about recently is whether or not impeachment trials will be beneficial or detrimental to Democrats,” Jagger McFarland, senior, said. “I thought it was interesting that [Bouie] was like, ‘No. There’s no way that it’s going to help him.’”