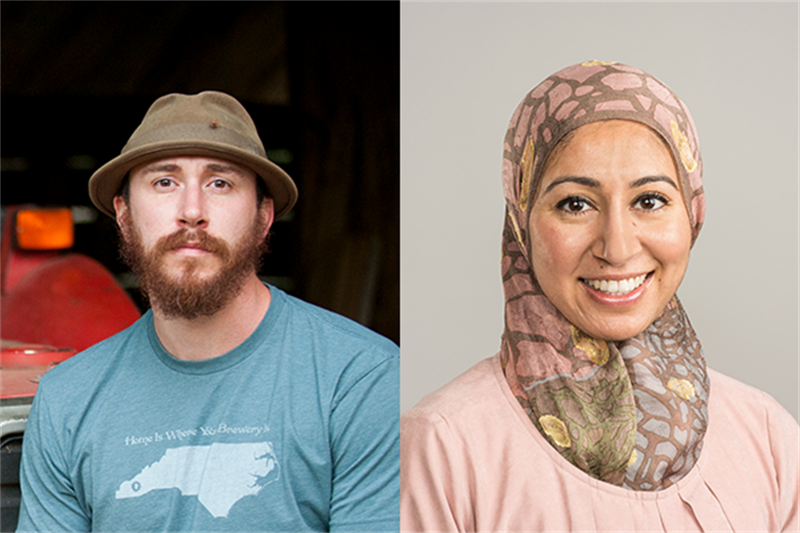 How is this historic era of political divides, social movements, and economic upheavals—fueled by the pandemic and politics—redefining America? Presented by the university’s Center for Political Communication, the National Agenda fall 2021 speaker series took the Mitchell Hall Theatre stage on Sept. 8, to answer this question.

Due to the COVID-19 pandemic, the 2020 edition, “We the People,” was presented as a free series of webinars on Zoom, open to the public. This year, National Agenda’s 11th annual series, “Redefining America,” returned in person this past Wednesday for the first time since 2019, with the option to still watch the events online.

“What are Americans doing during a stressful and uncertain time to stay engaged with politics in their communities and learning how to communicate effectively with each other?” Hoffman asked in the series opener.

From political insiders, journalists, authors, artists and media figures, the 2021 series celebrates the diversity of our nation. Hoffman invited novelist David Joy and National Public Radio (NPR) journalist Asma Khalid, who previously spoke in 2017, to reflect on America in 2021 for this event, entitled “Four Years Later.”

A recent study outlined in the Washington Post found news publishers known for putting out misinformation had higher amounts of engagement on social media than trustworthy news sources. Khalid, who was also a political correspondent for the 2020 presidential campaign and recipient of Indiana University’s Outstanding Alumni Award, spoke about how transparency is key in determining fake news.

“I think, as journalists, we can only do so much to put out authentic content,” Khalid said. “[Fake news] goes to people’s base instincts. It has to happen at a younger level where people learn news literacy in the same way that they are also learning basic financial literacy.”

For award-winning author Joy, having accountability and civil discourse has been lost not only in the American people but also in politicians as a result of past and present political turmoil.

“Sensibility is not sexy anymore, common sense doesn’t sell,” Joy said. “The only way that you’re ever going to get back the ability to have dialogue is to take the microphone away from children and say you’ve had your turn to speak. Until that happens, I’m not a very hopeful person to think that [Americans are] going to sort it out by themselves.”

From her perspective as a journalist, Khalid found that many people did not want to talk about politics at all. She notes that on-the-scene reporting has become “logistically harder” as a result of the pandemic, but there are benefits to opening up a dialogue.

“After being sequestered away for a while, we don’t really want to be stopped by a stranger asking for extra thoughts,” Khalid said. “It’s important to do it, just to talk to people.”

Finding common ground can be difficult, especially when you throw generational differences in the mix. A National Agenda student asked the speakers what young people (“Gen Z”) can do to engage in more civil discourse in the future.

Both Joy and Khalid, who consider themselves to be “older Millennials,” felt that leaning into discomfort is a good place to start.

“If you pick up five-pound weights all the time, you’re never gonna build muscle. [Being comfortable is] the same way,” Joy said. “Seek out places, situations and conversations with people that make you uncomfortable and challenge the things that you believe in. Only through a constant challenging of your beliefs are you ever able to truly solidify it.”

Like Joy, Khalid also believes in making a sincere effort to hear from the other side, particularly on policy issues.

“Figure out ways to have conversations with people who are not like you, whether that is a matter of how they look or what their politics are,” Khalid said. “The best way to grow is when you are feeling a little bit uncomfortable.”

The National Agenda series will continue until Nov. 17 in-person and online, with upcoming guests Berny Jacques and Geston Pierre on Sept. 22, in an event entitled “Divisive Issues Through Civil Dialogue,” followed by Senior Washington Correspondent Eric Michael Garcia, with an event entitled “Respecting Differences,” on Oct. 6.

Editor’s Note: Laura Matusheski is a former intern at the university’s Center for Political Communication. As of December 2020, she no longer works there.