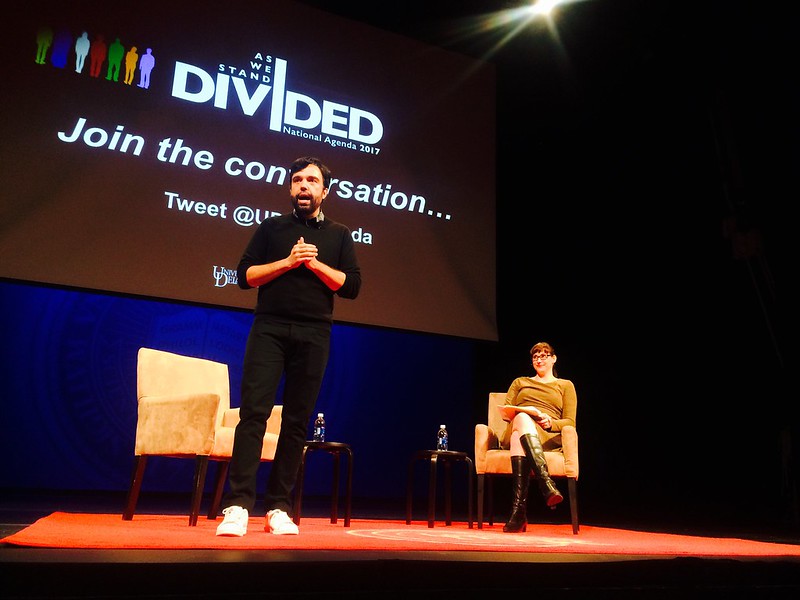 On Wednesday nights, the library often empties as humid days turn to cool summer nights.
But last Wednesday, students had a reason to stay as the “Midterm Matters” National Agenda Series kicked-off for the Center for Political Communication department with the “From Hollywood to Reality Film Series.”

This marks the first year of a film series, which serves as a one-credit course for students but is also open to the public. The first film was a documentary called “The Final Year,” an inside look into President Obama’s foreign policy team.

The film looks “at the foreign policy division of an administration what they have to do,” Professor Nancy Karibjanian, director for the Center of Political Communication, said.

The course includes an online discussion that Karibjanian said is above and beyond what she expected.
Karibjanian said the idea of a film series came last year from an HBO Documentary called “Latin Explosion” in the Library viewing room that became a “collective experience.”

The film series is just one feature of the CPC’s “Midterm Matters,” with the Delaware Debates and the Speaker Series that is led by Associate Director of CPC Professor Lindsay Hoffman.

Hoffman said that the Speaker Series mission is “how we can get students engaged in politics, community, civil discourse and the issues of the day in a non-threatening entertaining way.”

The series is non-partisan and tries to feature a variety of politicians, campaign strategists, comedy writers and journalists.

Other speakers include Dave Dewalt, a Cybersecurity Executive, or sixteen-year-old Gabe Fleisher, who writes Wake up to Politics, a newsletter that has more than 50,000 subscribers.

This shows that the overall goal of Midterm Matters, is “battle student apathy about politics,” Hoffman said.
According to the New York Times, only 14 percent of college students voted in the 2014 Midterm Election.

This unique speaker series is not just a talk, but an off-the-record conversation and dinner with Hoffman’s POSC/COMM 447 course that is, at times, difficult for students. But Hoffman said that “students walk away from this class with their lives changed.”

A talk last year with former Vice President Joe Biden and Ohio Governor John Kasich about bridging political divides made the event more popular than ever.

These types of experiences allow students to interact with the well-known and those they may not know so well. With this comes certain student stereotypes that do not always fit, like author David Joy from the Appalachian Mountains, who was different than what they expected.

Many universities throughout the nation are using such programs to “to increase student turnout on their campuses, spurred by a desire to develop students into better citizens,” as reported by the New York Times.

But Hoffman stated she “can’t say there is anything like this on any other college campus.”

The series allows not just students but the whole community to have a conversation with the speaker, engaging with the issues as a community, according to Hoffman.

The next film is called “Pay 2 Play,” in the “From Hollywood to Reality Film Series,” on Sept. 19 directed by John Ennis who documents how the power of money affects politics.

The first speaker in the series is Lauren Duca on Wednesday whose column in Teen Vogue has sparked controversy, in particular an interview with Fox News anchor Tucker Carlson.(CONF.) Carlson suggested that she “stick to the thigh-high boots. You’re better at that,” after she criticized Ivanka Trump’s role in the Trump Administration. Since then, she has renamed her column “Thigh-High Politics.”