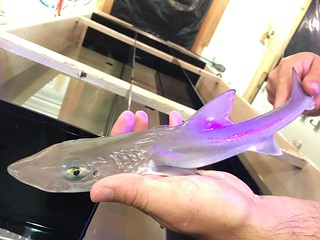 Ever since a trip to the aquarium at the age of five, she has known what she wanted to do with her life. Growing up can force one to change career paths or abandon their dreams for financial security, but Danielle Dixson never gave up on her childhood dream, and nearly 30 years later, she is living it.

Dixson, 33, is an assistant professor of marine biosciences at the university.

“I wanted to be a marine biologist who worked with sharks,” Dixson says. “That was my thing. And now I am.”

In her lab at the university’s Lewes campus, she and her student assistants are studying dogfish sharks and the effects of human-caused changes, such as ocean acidification and climate change, on their behavior. She has done similar work with clownfish, and found that ocean acidification can affect their sense of smell and therefore their ability to detect a nearby predator.

Dixson has worked around sharks for years, but her most frightening moment came from being in the water with a large crocodile in Papua New Guinea. She did not notice it until she was out of the water and someone said to her, “oh good, you’re back.”

Though when it comes to being in the water with sharks, she is seemingly unphased.

Once, while working in the water with seahorses in Tampa, she was hit and knocked over by a bull shark. She also was near a tiger shark while scuba diving in the Great Barrier Reef, and did not notice until people on a boat nearby pointed it out to her group.

“I’ve been in the water a lot,” Dixson says. “So I can usually see when sharks are being aggressive or when they’re just swimming around.”

Most marine biologists tend to ignore behavior in animals and instead focus on physiology or changes in survival and growth rates according to Dixson.

“Behavior is really important,” Dixson says. “How animals behave actually interacts with the environment, which shapes the ecosystem in general.”

In the wake of recent findings from Delaware research in sand tiger sharks as well as the news about the Great Barrier Reef’s deterioration, Dixson is disappointed by the small amount of media attention given to ocean sciences.

We rely on the ocean for several things Dixson says, including storm protection, weather effects and food. In some countries, fish are the only source of protein.

Dixson and her assistants are in the early stages of research for testing juvenile dogfish sharks and observing their decisionmaking in water with a skewed pH level and temperature.

The sharks are placed in a maze where they are forced to turn either right or left. Their choice indicates which way they are lateralized, or in other words, which side of the brain is working in that moment, according to senior Taylor Deemer. Deemer works with Dixson in her lab.

“What we’ve seen so far in the trials is that they really prefer to go left,” Deemer says. “So they’re probably left-side lateralized.”

“They’re essentially left-handed,” Dixson adds. Then, when placed in acidified waters, the sharks choose both directions in their trials. In a real ocean environment if they chose to migrate in different directions, they may not be able to avoid a predator.

Several shark species are endangered, in part due to the shark finning industry and the shark fin soup tradition in Taiwan. It is estimated that 73 million sharks are killed per year as a result of finning.

Dixson also sees the long-term effects of climate change and ocean acidification as “the straw that breaks the camel’s back.” Even a small increase in climate and acidification by the end of the century could be a huge threat for the shark population.

Dixson says she hopes that her research can provide more information for shark habitats in the future and that the effects on sharks’ behavior can imply similar behaviors in other shark species, since species like the sand tiger sharks are too large to bring into a lab to look at behavior.

“If this is a fairly universal trend,” Dixson says. “It’s likely the same things are happening to sand tigers and some of the bigger animals as well.”