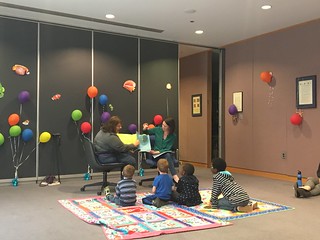 Morris Library was a sea of color Thursday night, decked out with balloons, quilts and sea-creature shaped cutouts, an effort to make the 1941 Lecture room more suitable for an audience very different from the usual students and professors.

This was the last of six “story hours” over the course of last week. These events were the culmination of a semester’s work for an experimental class entitled “Science Through Storybooks.” Children were invited to listen to readings from student-created books about marine biology.

Students from three departments worked in group of three: one marine studies student, one art student and one psychology student. Each team developed a picture book that is appealing to children, while still being scientifically accurate.

Each student uses their area of expertise towards the book. The marine science student has to understand the science and the details of the experiment, then the art student creates the illustrations.

Dixson realized the need for more understanding between scientists and local populations while conducting research in Fiji and Papua New Guinea.

“I found that getting the locals interested in the research helped not only the research, but it also gave them insight into what I was doing and helped form a friendship with them,” Dixon says.

She began making video presentations for locals but found that it was not the most effective way to get through to the youth. Since children in these areas are not accustomed to screen time, books were a more effective way to keep their attention. WIth her own research she started making books, then had the idea to take it to the next level.

“Since it was interdisciplinary it allowed you to learn from other people but also bring your own speciality to the table,” she says.

Psychology students like Brinster designed a study to gauge how effective the books are as teaching tools. After being read the storybooks, the children were asked a few short questions to measure their understanding.

“To take the research and turn into a storybook meant for a three year old, you have to really understand the research in order to bring it down to that level without losing too much,” Dixson says.

Dixson feels that this method of instruction could be applied to other disciplines.

“From all the research that has been done on the way kids learn, kids that are read to more often have a bigger vocabulary and better grades in the long run,” she says. “I’m hoping that by adding science to that we get those same results, especially with underrepresented minorities in science like girls and other minority groups.”

Through matching students who wouldn’t normally have the chance to work together, Dixson is hopeful that the project will foster appreciation and mutual respect.

“They can all come together and create something that is meaningful for all their different disciplines and develop the skills to communicate with people outside their fields,” Dixson says.

“Especially in today’s political climate I think it’s really important that science people can communicate with non-science people to explain what you’re doing, why you’re doing it, why it’s important, without jargon so that people understand,” Dixson says. “People cannot value something they don’t understand.”

Taylor Tewksbury, a junior marine science major, enjoyed her experience with the project.

“If you make it relevant, it gives people a reason to care,” Tewksbury says. “If you’re just kind of doing your scientific research, it doesn’t really matter until you get people to really care about it. That’s why these kinds of things are important.”