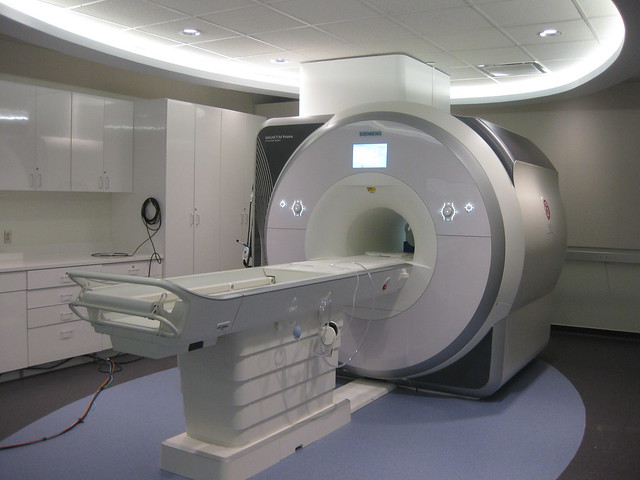 Courtney Messina/THE REVIEW
A new facilities opened on campus that houses the university’s in house fMRI machine, a highly sophisticated instrument well-equipped to decipher the many mysteries of scientific inquiry that have long-eluded researchers in the field.

The newly-opened Center for Biomedical and Brain Imaging (CBBI) provides the university with a cutting-edge tool that will allow Delaware’s faculty to perform previously unprecedented research.

The CBBI, which hosted its ceremonial grand opening on April 15, houses a state-of-the-art fMRI machine that brings with it a cornucopia of opportunity for most, if not all, of the university’s seven distinct colleges.

As one of the first of its kind, the Siemens 3 Tesla Magnetom Prisma is the most powerful magnet of its class. Utilizing the latest advancements in MRI technology, the highly sophisticated instrument is well-equipped to decipher the many mysteries of scientific inquiry that have long-eluded researchers in the field.

Located on 75 E. Delaware Ave., the machine is encased inside a two-story, 11,800-square-foot core research facility that began construction as an extension to the Life Sciences Research building in March 2015, according to a university press release.

“It’s called a core research facility and what that really means is that it doesn’t belong to a single department,” Robert Simons, assistant professor and chair of the department of psychological and brain sciences, said. “It really belongs to the entire university.”

Simons, who served as a chair on the task force that ushered the facility’s arrival into Newark, said the instrument will be an essential resource in expanding the university’s research faculties as a whole.

“It accommodates scientists from the college of arts and sciences, the college of engineering and the college of health sciences right now, but we’re also reaching out to the other four colleges,” Simons said. “I think as word gets out about its capabilities, we’ll see a lot more users expressing interest.”

Funded predominantly by the Unidel Foundation, an organization founded by Amy DuPont that strives to aid and promote higher education in the state of Delaware, the hope is that this new and expansive addition to the Newark campus will help Delaware compete and collaborate with other neighboring research institutions with similar technological capabilities.

Furthermore, the inauguration of the facility has also played a pivotal role in the university’s recruitment effort.

“We have 40 faculty members coming in the fall, three of which are fMRI users,” assistant professor Timothy Vickery said. “It has also made it easier to recruit students, especially graduate students, who know that the facility and our expertise are going to be here.”

Vickery, who has been traveling to and from the University of Maryland to perform his spatial attention research, attests that this addition to the university will also be immensely beneficial for Delaware’s 18,000 undergraduate students, particularly for training purposes.

According to Simons, the machine has two separate functions: it can image structural MRIs, which are suited for scanning brain, muscle and joint tissue, and functional MRIs, or fMRIs.

A specialized type of magnetic resonance imaging, fMRIs utilize a “functional” imaging technique that allow psychologists, amongst other brain scientists, to watch the mind in action and develop an understanding about what areas of the brain are most active while an individual is performing a certain specific task.

“Simply put, the machine lets you examine cognition and see where exactly it’s happening in the brain,” Simons said.

However, unlike other fMRI-equipped schools in the surrounding region like the University of Pennsylvania, the University of Maryland and Johns Hopkins University, this machine generates twice the strength of older models, which allows for exceptional and unmatched anatomical detail–an attribute that will be particularly beneficial for studying pathological conditions involving the brain, spine and musculoskeletal system, according to Simons.

“It’s a brand new model and it’s only been out probably a year or less,” Simons said. “We were one of the first to get it, in this country anyways.”

The CBBI facility is the first building that has been dedicated solely to fMRI research in the state of Delaware, according to a university press release.

The latest product of the Delaware Will Shine strategic plan, an initiative aimed at achieving excellence in multidisciplinary research and scholarship, the investment will likely catapult the university into the conversation of who the best research universities in the country are, Simons said.

With no shortage of creative ideas and a now-abundant array of resources, the university has acquired an asset that will allow the university to enter into the new age of research one step ahead, Simons said.

“There’s a lot of work that we can get done now that we couldn’t have before getting this kind of facility here on campus,” Simons said.