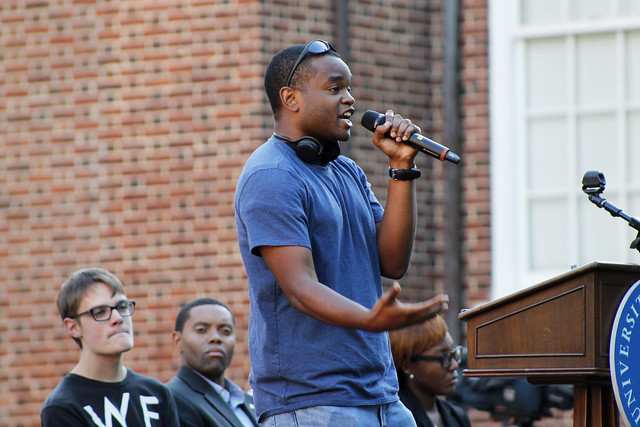 Morgan Brownell/THE REVIEW
Kenny Daughtry, a graduate student, spoke to the crowd about the misinterpretation of Affirmative Action and his experiences working at the school.

BY MATT BUTLER
Editor in Chief

Students from the Black Lives Matter movement on campus organized a large forum on Wednesday afternoon, in direct response to what appeared to be nooses found in a tree outside of Mitchell Hall the previous night. The event was held on The Green outside of Memorial Hall, with the tree visible to the whole crowd.

The gathering was announced last night in the wake of images of what appeared to be nooses spreading throughout social media. Though the nooses were investigated by UDPD and found to be leftover parts of a paper lantern, organizers felt the protest was still necessary.

One by one, students, professors and alumni walked to the podium outside of Memorial Hall. They shared their personal experiences with the crowd, speaking of discrimination, use of the n-word, unsatisfactory racial curriculum and the general racist tone around campus as they had seen it. Prior to these testimonials, the crowd heard from Acting President Nancy Targett, who pledged further action to fight campus racism regardless of the results of the noose investigation. UDPD Chief Patrick Ogden also reiterated his prior statements that he is now certain the items were from a previous event, and had no racial intent.

“Instead of spewing hate, what they spewed was reason and a request for civil discourse and request for change and they used their experiences to help us understand the change that we need make,” Targett said after the event. ““The conversation starts now, change starts now, we have to start today. We can’t kick this can down the road at all. It’s now.”

Senior Eli Webster said he has experienced years of racism directed at him around campus, and has vivid memories of places he has seen or things he has heard that are overtly racist. He called for more diversity training and said he is “running out of patience” with the university’s struggles to properly deal with racism.

“This incident, or misunderstanding, is just the cherry on top,” Webster said. “I fear, as students of the University of Delaware, that we live in a climate that has now reached a boiling point. It is time for us to look at how we can change our university and make it a more comfortable environment for minority populations […] Some could say this has been insanity. We’re doing the same things over and over again and hoping for a different response.”

Some students at the event were not certain they accepted the lantern explanation. Isaiah Thompson, one of the speakers, said he is still unsure what to think about last night’s events, but that the thought of a noose came so quickly speaks to a larger problem on the campus. He also read some of the posts on anonymous app Yik Yak that degraded or complained about Black Lives Matter that had appeared since the initial images first hit social media.

“I’m just going to address the elephant in the room: We’re still skeptical about what last night was,” Thompson said. “Regardless of what we have heard, we are still questioning it.”

Communications professor Steve Mortenson also took the stage, and said the white population on campus has to acknowledge and recognize the privilege they inherently have. He said it can be hard to be self-aware to that level, particularly when the general public does not particularly want to hear about white privilege, but that understanding the challenges faced by minorities is crucial to moving forward as a university community.

After the event, senior Jeremy Mathis, who organized Monday’s Katie Pavlich protest, said he was encouraged by the attendance at the gathering. He said it helped him recover somewhat from the emotional whirlwind of Tuesday night.

“Those comments on social media are not representative of the hearts and souls of our students and faculty,” Mathis said. “Sometimes you get bogged down in so much dark sadness and hatred that the world pumps out, so just to see that there was so much community here […] It was beautiful.”

Ultimately, alumnus James Church provided perhaps the most powerful quote from a ceremony full of them:

Carol Henderson, vice provost for diversity, also announced a diversity action plan that is currently in the final stages of approval. She said once that plan has passed through senior leadership, it will be presented to the student body.