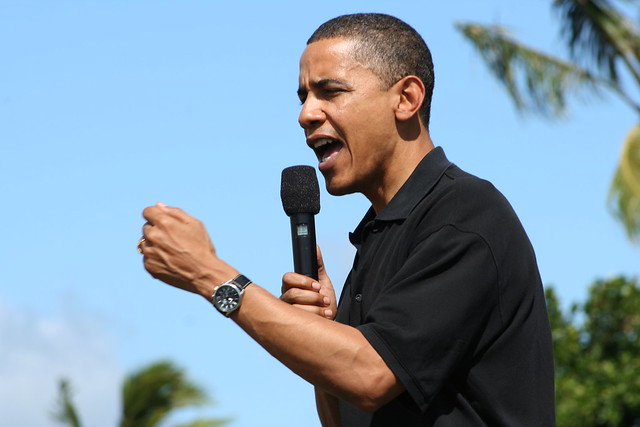 Courtsey of Justin Sloan
In a campagin stop to Philly two weeks ago, President Obama expressed his unwavering support for Hillary Clinton.

If you are not “with her,” than you are not with “him” either — President Barack Obama, that is.

At a campaign stop for Hillary Clinton on Sept. 13, Obama expressed his absolute support for the former secretary of state in her quest for the presidency and denounced any ongoing speculation about her fitness for office.

“Hillary Clinton is steady and she is true,” Obama said. “[She] has traveled to more countries than any other secretary of state has, has more qualifications than any candidate in history.”

The 40-minute speech in Eakins Oval marked Obama’s first solo Clinton campaign event and drew upwards of 6,000 people to the park in front of the Philadelphia Museum of Art. It also became a vigorous push for the campaign after a slow few days, with Clinton sidelined by a controversial bout of pneumonia.

Obama did not waste any time tearing into Clinton’s opponent, Donald Trump, either. He questioned the validity of Trump’s allegiance with the working class, as well as his fondness for Russian President Vladimir Putin.

“Donald Trump has spent most of his life trying to stay away from working people,” Obama said. “Now he’s their champion?”

The president also expressed concern that Trump looks to Putin as a “role model” and challenged that the GOP is losing its identity.

“Think about what’s happened in the Republican Party — they used to be opposed to Russia and authoritarianism and fought for freedom,” Obama said. “Now their nominee is out there praising a guy, saying he’s a strong leader, because he invades smaller countries, jails his opponents.”

The rally drew supporters from all walks of life and corners of the country and for many people, including Evan Kassof, 27, the event represented a final opportunity to catch a glimpse of the 44th president.

“I’m really excited, I went to Obama’s 2008 inauguration and it was thrilling,” Kassof said. “I wanted to make that come full circle today.”

For Obama, the tone of this election cycle is considerably different than 2008. For many, animosity and contempt have replaced optimism and promise.

The president suggested that instead of hopefulness, Trump has “a dark vision where we turn away from each other.”

Hillary supporters like Marc Daniels, 61, are fed up with the pessimism and hostility.

“Hillary and Trump are playing hate ping pong with each other,” Daniels said. “We need to weed out the hate.”

Though many people are feeling hopeless or unsure about their options, there were plenty of people at the rally who know exactly where their vote will go.

For James Perelman, 28, the choice is clear.

“I voted for Hillary in 2008. She’s tireless. And no matter how many times she gets knocked down, she gets up,” Perelman said. “And also I find Trump to be a terrifying Cheetos Jesus.”

Improving the safety of the New London-West Main railroad crossing