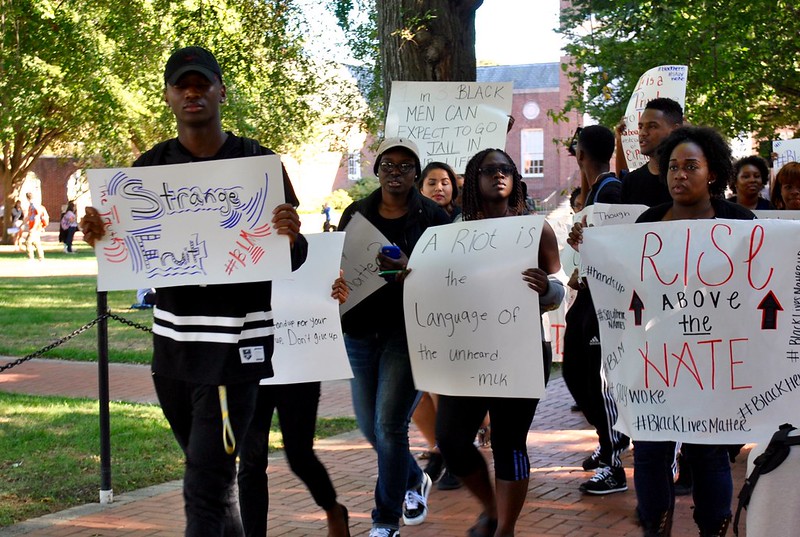 After a student reported a noose-like object hanging outside of Mitchell Hall the day after a #BlackLivesMatter protest which took place in the same location, university police launched an all-night investigation. They ultimately concluded that a hate crime had not been committed.

The police reported that the hanging objects were remnants from paper lanterns from Alumni Weekend back in June. Students’ faith in the investigation has wavered because many still feel that there was an intention behind the timing of the appearance of the items.

Sophomore Autumne Sneed said the investigation did not seem thorough enough, in her opinion. She said university police took the word of only a handful of people, two of whom were on the university public safety staff, which she had a hard time accepting as credible sources.

Junior Keenan Faison said he believes wholeheartedly they were tampered with to look like nooses. He said he agrees that the objects hanging in front of Mitchell Hall were remnants of paper lanterns. However, he pointed out that lanterns have a spiraling wire inside to hold them in place.

“Where were those wires?” Faison asked.

Faison said the timing and the missing wires are what make him question the intent behind the objects.

“If they were naturally just left like that, why would it take like three-and-a-half months to see it and call about it?” Faison said.

Sneed said the more she looks at them, the more they appear to be paper lanterns, but she still remains somewhat skeptical because the placement in front of Mitchell Hall feels purposeful to her. She said that no one saw this the day before—there are pictures and footage from Monday’s protest and they are not visible.

“I believe it is in some people’s hearts to do that,” Sneed said. “But if it was going to be a noose, it’s the poorest-made noose I have ever seen in my entire life.”

Sophomore Megan Hart said in an email that although the circumstances were strange and coincidental, the details shouldn’t go unnoticed.

She said it took a large ladder for university police to take the wires down, meaning that if someone had committed the act purposefully on campus they would have needed to carry a full ladder in order to carry out the act.

What happened, she said, was an event of horrible circumstances and next time there is a university event, the staff needs to make sure there are no remnants left from their occasion. However she acknowledges this has opened up a discussion for a diversity problem and allowed voices from the black community to be heard where they were ignored before.

“I personally do not believe UD would cover up such a horrible display of racism on their campus, unless, as further evidence showed, it was not actually what it thought to be,” Hart said.