Our university has a really bad lying problem.

The lies are not only made, but made with delusionally high amounts of confidence, featured prominently on our buildings and pamphlets. Take the lie that the University of Delaware was founded in 1743. Or the lie that Hugh Morris “fought for desegregation” of the university.

Thankfully, we have a student newspaper, and both of those lies have been exposed for what they are: lies. And thankfully, the university has deferred to truth on at least the latter lie. Moreover, while the university stubbornly continues to insist on the “1743” lie, most people understand it as a lie, or, at minimum, a fanciful distortion. The crucial Orwellian step, in which a lie is converted into fact, has not yet been achieved.

But there’s one lie that is dangerously close to achieving the wrongful status of fact, and that the university routinely employs in affairs far more serious than pamphlets. Namely, that the University of Delaware is somehow a “public-private” university.

Anybody who has come through our newsroom — or, for that matter, any newsroom in the state — has been slapped with this lie, usually in response to a failed application of the Freedom of Information Act (FOIA), one of the 20th century’s great feats in public transparency that has, on innumerable occasions, in this state at this institution, been thwarted by a lie that even lawyers have conceded to.

In response to FOIA requests, or any other pressures toward public transparency — publicized Board of Trustees meetings, attempted accountability from the Legislature, et cetera — the university plays its private hand. Frequently, the university’s lawyers will claim that UD is a “corporation” and privately governed, that it has both public and private status, as though this is some kind of coherent hybridization rather than a flat, opportunistic contradiction. It is on these grounds that the university denies the public access to information about where taxpayer money — which funds roughly 10% of the university’s annual operating budget — is being put to use.

But there is something legal and more formal that states emphatically what the university is, and that, in my view, buries the matter. As far as I know, the most recent ruling on this dates to 1950, in the case Parker v. University of Delaware, which marked a monumental (though still unrealized) shift in this instiution’s demography, and which also determined unequivocally that the university is a public institution, and hence accountable to public laws and demands.

The case, which I’ve written about elsewhere, resulted in the desegregation of this campus. The short of it: Prior to 1950, the university did not, spare in exceptional situations with graduate students, admit black people. As such, black students were forced to attend Delaware State University, at the time offering far fewer services and resources than the University of Delaware. Louis Redding, then working for the NAACP, sued on behalf of 10 Delaware State students that had been wrongfully denied admission to the University of Delaware. After the judge, in the Court of Chancery, found that the “separate but equal” clause from Plessy v. Ferguson was not, in this moment, satisfied — the quality of education at Delaware State was far inferior to that offered at the University of Delaware, he determined — and the university was forced to desegregate.

But the decision, first and foremost, hinged on the status of the University of Delaware — namely, whether it was a private corporation or state agency. Naturally, the university argued that it was a private corporation. If true, the university would not be bound, in this case, by federal civil rights law, but would rather be free to admit or deny students on whatever bases it chose. (Curiously, though arguing this line, the university also sought and received legal representation from the state Attorney General, representation claimed on the basis of its status as a public agency. Some contradictions don’t die easy.) By contrast, if the court declared the university to be a public agency, then it would be subject to federal and state laws and policies.

Judge Seitz of the Court of Chancery declared forcefully that the University of Delaware is a state agency. The decision involves a number of beautifully argued, irrefutable points that my word count won’t permit me to enumerate. But, the part that’s relevant for the present purposes: “I conclude that the University is an agency of the State of Delaware under the common law and under the constitutional test required by the 14th Amendment. The actions of its Trustees must be judged in that light.” On these grounds, Seitz ordered the university to desegregate, in conformity with Plessy v. Ferguson, then the active precedent.

What’s changed since then that might make us a private, rather than public, institution? Absolutely nothing. Or at least nothing relevant to the verdict. The conditions cited in support of the university’s status as a state agency — origin and charter, various public functions — have remained the same. In fact, the support, on these terms, for public status has probably only grown, right alongside the university and its indisputable position as the state’s sole, major research institution, a position it proudly and publicly assumes.

And, when it matters, the university has no problem embracing its public status. In the spring of 2018, for instance, in a demonstration of greed that makes me nauseous to this day, President Dennis Assanis brazenly requested $66.5 million of taxpayer money from the state, an apparently necessary supplement to the hundreds of millions already swirling in the endowment, not to mention the hundreds of millions more that were being and continue to be funneled in through Delaware First fundraising channels. We were apparently so desperate that the state needed to “reach deep into the sofa cushions,” as Provost Robin Morgan put it.

Meanwhile, as Delaware State’s plea for even more money made clear, the state’s university that actually and consistently embraces its public status is suffering tremendously, and our own university is attempting to squeeze its historically black counterpart’s already thin and tenuous source of continued vitality.

All of this behavior is thoroughly contemptible and plainly illegal. The University of Delaware has long ceased to justify its public role in this state — contrast ISE Lab with Newark High a quarter mile away and tell me why the public should support this scam — yet has continued, when it’s convenient, to squeeze the state for money.

And the implications of this debate are not restricted to dollar signs. I, for one, think a good deal about free speech and censorship on this campus. Of course, under federal law, censorship at a public institution is illegal. And a private appeal wouldn’t hold in court either — private institutions are, in censorship cases, accountable to their own professed standards, and numerous policies on campus guarantee free speech. But what if those clauses of those policies were to ever disappear, quietly and inconspicuously, from the web pages? The same worries extend to any other civil liberties matter.

Public or private, we need a renewed verdict, since the last one, in more ways than one, seems to have been forgotten. Corporate though the university looks, it is not Burger King, nor whatever the Aramark equivalent is — Hullihen cannot simply have it its own way.

Someone needs to take this school to court. This public-private lie needs desperately to die, having achieved the status of for-granted fact and used toward undemocratic ends. I only hope some lawyer will step forward for the easiest case their career will ever give them.

Caleb Owens is a senior at the university. He is the former editor-in-chief of The Review and the current development officer on staff. His opinions are his own and do not necessarily reflect the majority opinion of The Review’s staff. Caleb Owens may be reached at calowens@udel.edu 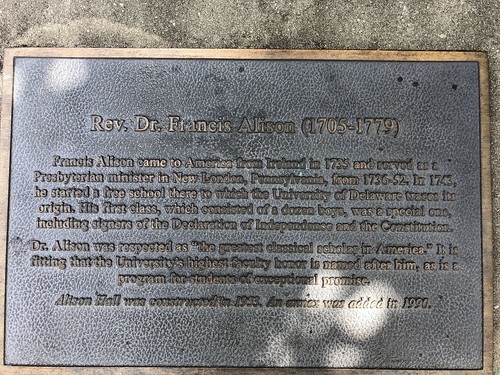 SATIRE: At 1,743’rd mention in 2019, Francis Alison resurrected from the dead

Rev. Francis Alison, the university's claimed founder, was resurrected from the dead this weekend.