Jan Castro /THE REVIEW
The Class of 1955 Ethics Endowment Fund and the Department of Philosophy presented “Debating Immigration: Do Nations Have a Right to Exclude Immigrants?”

On a rainy Thursday evening, philosophy scholars Joseph Carens and Kit Wellman met in Gore Recital Hall, an auditorium in the Roselle Center for the Arts, to debate immigration.

The ongoing debate on immigration and borders, particularly in light of a global influx of refugees observed in recent years, has been one which exists at the intersection of political, economic, social and geographic analyses. But to assess the philosophical dimension of immigration, as Carens and Wellman suggest, may offer a unique angle with which to arrive at productive discourse.

“When most of us thought that it was implausible to posit that there might be duties to people beyond our borders, Joseph recognized that human beings on the other side of national borders matter morally, long before many of the rest of us did.” Wellman said, acknowledging the work of his colleague and counterpart in the debate.

The Class of 1955 Ethics Endowment Fund and the Department of Philosophy presented “Debating Immigration: Do Nations Have a Right to Exclude Immigrants?” The moderated debate included 20-minute opening arguments by each philosopher, followed by 10-minute responses, five-minute concluding statements and a final question-and-answer portion.

Wellman, a professor of philosophy at Washington University in St. Louis and co-author of “Debating the Ethics of Immigration,” began the evening by arguing that nations do have a right to exclude immigrants.

Wellman premised his argument on principles of state sovereignty, including freedom of association (such as an individual’s right to join or leave groups voluntarily) and self-determination (how a country determines its own statehood and forms its own allegiances and government.)

The relationship between freedom of association and self-determination, Wellman argued, would be conflicted if nations did not have the right to exclude immigrants. Though he did not necessarily advise whether or not nations should exclude immigrants, Wellman described how nations should reserve the right to do so, as an exercise of state sovereignty.

“I imagine, or at least I hope, that in a century or two people will look back upon our world with bafflement and shock,” Carens said.

Carens, a professor of political science at the University of Toronto and author of “Immigrants and the Right to Stay,” argued that nations do not have a right to exclude immigrants.

“First, even if we think, as indeed most people do, that nations normally have rights to control admissions, that right is not absolute,” Carens said. “There are moral constraints to the kinds of exclusions that states may practice … We may come to see that it is actually morally wrong for nations to exclude immigrants at all.”

Carens’s primary illustration compared the morality of exclusionary immigration policy to that of medieval feudalism, in that the suppression of either social, economic or geographic mobility highlights states’ complacency to entrenched and systemic injustices.

“What do we imagine will happen to these people if we do not take them in?” Carens said. “In many ways, citizenship in Western democracies is the modern equivalent of feudal class privilege. It’s an inherited status that greatly enhances one’s life chances. To be born a citizen of a rich state in Europe or North America is like being born into the nobility in the Middle Ages.”

In this case, modern borders with guards and guns draw attention to an immoral suppression of mobility for mostly ordinary and peaceful persons born into disadvantaged circumstances out of their control, according to Carens.

During his response period, Wellman conceded to agreement with Carens on matters of global and institutional injustices.

“If you’re right, then the status quo is a moral abomination,” Wellman said. “And everyone in here should be working extremely hard to reform the status quo. You’re right. He’s right.”

But Wellman proceeded to emphasize points of disagreement in reference to the duties of states when responding to these injustices. Open borders and the mandatory admission of immigrants and refugees, Wellman argued, are not within the realm of justifiable duties which states must be compelled to adopt.

During his response, Carens sought to identify potential holes in Wellman’s argument. Namely, despite addressing matters of freedom of association and self-determination in his argument for why nations should have the right to exclude immigrants, Wellman did not address the concept of freedom of movement, which Carens argued is a basic human right.

“The presupposition is that freedom of association entitles us, somehow, to restrict freedom of movement,” Carens said. “Think about Delaware. Can Delaware tell people from Massachusetts or South Carolina not to come? It can’t. Well, why not?”

Despite agreeing on the reality of global and institutional injustice, Carens and Wellman suggested vastly different solutions to such issues as it related to national borders.

Wellman concluded by reiterating that open borders can be a form of solution, but should not be a compulsory policy. Instead, privileged states are tasked with a responsibility to reform the institutional problems which force people to migrate and seek refuge in the first place, whether that means voluntarily opening their borders or offering other forms of assistance.

“I didn’t come here just to vindicate my view,” Wellman said. “If you leave with one thought from tonight, it’s that Joe is right. The world is unjust. The problems are inherently institutional, and each of us is like royalty. And we have a duty to do what we can to repair those institutions.”

During the evening’s question and answer portion, it was touched upon that, despite being titled a debate, Wellman and Carens’s discussion involved a considerable degree of agreement and overlap.

“I much prefer a conversation from different perspectives and seeing where you agree and disagree and exploring that together,” Carens said after the debate. “That’s the way that I much prefer to engage. There’s a kind of priority given and, I think, a kind of award given, to disagreement. In academic life generally and philosophy in particular.”

For Malasree Neepa Acharya, an assistant professor of political science who had addressed the philosophers during the question-and-answer, such academic and philosophical debates on immigration may be potentially problematic, in that they risk missing a critical component in the conversation on immigration.

“The refugee experience is so specific,” Acharya said. “When I was talking about Angelos Joseph, who’s someone I work with, who’s a South Sudanese refugee, he’s been waiting [for asylum] for two years. His entire family was killed in front of him. He was basically conscripted to be a soldier.”

The stark, individualistic reality of the refugee experience, Acharya said, is oftentimes a matter which deals in terms of life and death.

“Then the Greek government asked him, ‘But what if we send you back?’” Acharya said. “And he said, ‘You should just kill me first.’” 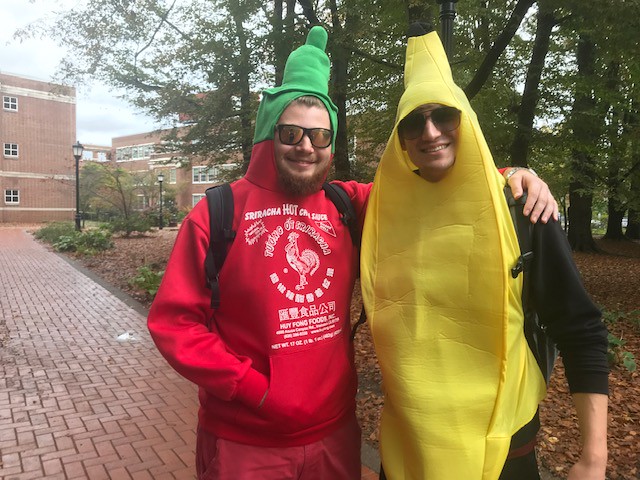 Too cool for costumes?

I hunted down a few of these students to truly understand the spirit of Halloween possessing them.