Poet Elizabeth Acevedo shares her voice with the university 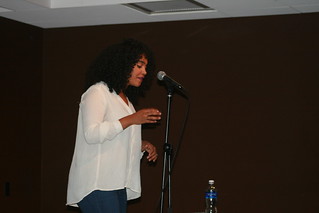 Drew Webb/THE REVIEW
Poet Elizabeth Acevedo came to the university to perform pieces that touch on race and gender identity.

An abundance of snapping fingers, applause and even the occasional “yaasss,” filled the Trabant Student Lounge Tuesday night as poet and writer, Elizabeth Acevedo, expressed her passion and pain through spoken word poetry.

“And when they ask you who she be, you tell them, ‘that girl’s a beast,’” Acevedo recited to begin her hour-long set. The university is Acevedo’s 24th stop out of 50 universities this semester for her “Beastgirl” tour.

Acevedo, 28, brought the art of spoken word back to the university, along with a workshop for students to discover their poetic voices. The event and workshop were coordinated by The Center for Black Culture (CBC) and HOLA.

The Dominican poet was born and raised in the Bronx, also the birthplace of hip-hop, and Acevedo initially dreamed of being a rapper one day. She eventually shifted her focus to poetry when Lil’ Bow Wow was popular, joking that there could only be one 13-year-old rapper.

Gemelle John, a 2015 graduate, attended both the workshop and the performance. She said Acevedo gave the attendees three different scenarios to write about and then said to combine the three into one prompt.

“All of the [prompts] I think by themselves would have been unique,” John says. “But putting them together as one prompt was very awe-inspiring.”

John served as the vice president of the now-nonexistent student organization, Stimulating Prose Ideas and Theories (SPIT) for two years while studying at the university. SPIT was a group mostly for poets, artists and MCs on campus, but had trouble maintaining its active status as an organization.

“Poetry is not like a club sport,” John says. “People are very hesitant to write poetry.”

She says people may be fearful of learning to write, so SPIT could not hold enough people to remain a Registered Student Organization.

Senior Obichukwu Maduna-Ugwu was in SPIT while it still was an active RSO. He joined the group as a freshman because it embraced creativity and expression for students, especially those of color.
“In the environment we’re in, especially at a [predominantly white institution], our creativity isn’t encouraged,” Ugwu says. “Even by people of color.”

Acevedo’s performance focused heavily on social and cultural ideologies, as well as race and gender identities. She rapped in both English and Spanish throughout her performance, and slid into anecdotes throughout. Her viral piece entitled “Hair” gives insights into her and her mother’s relationship, urging Acevedo to “think about your daughter’s hair,” as hair is often politicized in the Dominican community. She even performed a piece surrounding rape culture entitled “Spear,” which she is sometimes hesitant to perform at universities, she said.

Stacy Chacko, a senior, attended the performance and was inspired to see Acevedo as a woman of color, bringing her art and expression to campus.

“HOLA and the CBC did a great job in bringing somebody like this,” Chacko says. “Because the climate at [the university], sometimes you don’t get opportunities like this to interact with such inspiring people of color who are doing work in the arts.”

Devon Miller-Duggan, who teaches poetry writing at the university, described Acevedo’s performance as “fierce and brilliant.” She said she doesn’t have many spoken word writers in her classes.

“I always come to the spoken word performances on campus,” Miller-Duggan says, “The emotions are so open, and traditional poetry is not about the same kind of openness that spoken word is about.”

Acevedo may have read her poems dozens of times, but she says every performance is a new experience for her because of the connection she shares with audiences.

“Studies have shown that people who engage in creative writing, either reading or writing it, are more empathetic human beings,” Acevedo says, “It makes us more human.”