Professor brings the Global Populism Lecture Series to a close 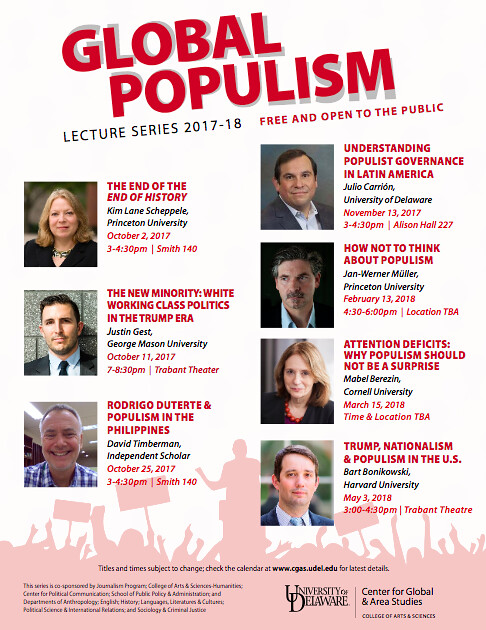 Courtesy of
A Harvard professor stopped by the university to discuss populism in America and Europe.

Despite the sunshine and nice weather last Thursday, many would come not just for the air-conditioning, but to listen to a talk of high national and global importance.

Harvard Professor Bart Bonikowski addressed growing concerns of populism, nationalism and authoritarianism in his lecture “Trump, Nationalism and Populism in the US.”

His lecture marked the final installment in the Global Populism Series that was organized by university professor Daniel Kinderman. The series was sponsored by the Center for Global & Area Studies, with many departments throughout the Humanities in the College of Arts & Sciences. The lecture series featured a wide range of scholars including Professor Kim Lane Scheppele, Justin Gest, Julio Carrion, Jan-Werner Müller, Mabel Berezin and independent scholar David Timberman.

Bonikowski differed from many in the series by being a professor of sociology. The lecture flyer explains, “his work applies insights from cultural sociology to the study of politics in the United States and Europe.”

His presentation highlighted how many politicians like President Donald J. Trump and various others throughout Europe use populism and nationalism in order to get elected. Bonikowski said populism is often the “language of challengers,” and that it has been a “strategy political outsiders can use to gain political power.”

According to Bonikowski, politicians can use such elements of nationalism to “make these beliefs salient and important without the presence of the outsiders against whom the beliefs are oriented.”
He also stated that “populism is a form of political discourse.” He documented a variety of similarities and differences between the United States and Europe that are experiencing such effects throughout politics. Where many have used it as a “switch you can turn on or off. Not a deep ideology you hold. It is a set of frames you use,” but also how “certain attitudes that lead people to support politicians who have populist claims.”

Populism has deep roots in the history of U.S. politics,“populism has been around for a long time in both parties,” said Bartnikowski.

He would further remark that they have often changed the “content of a populist varies. Elites themselves range from, IRS, Washington Bureaucrats or Unions making nefarious deals, Wall Street fat cats.”
In many cases, populists use authoritarian methods when elected. Many foresee the potential of this in the United States. This is usually used due to the need of “solutions to remain in power,” Bonikowski said. He went on to say that that “politically, [authoritarianism] is the most dangerous because it can erode democracy,” later adding that it is possible to “do a lot of damage to democracy by following the law to the fullest.”

This lecture series has been motivated by the changing times in politics throughout the United States and Europe, as seen by events Kinderman described as “a surprise,” like Brexit and the election of President Trump.

Many of these presentations have been well-received by an increasing attendance from students and professors, and has allowed for “good questions and discussions,” as Kinderman remarked.
Although the series will not carry into next year, Kinderman hopes to see some similar lectures continue with the possibility of “organizing other lecture series in the future,” regarding Global Populism.

Bonikowski’s talk was highlighted by Kinderman as the Keynote Speech for the first day of the “Democracy in Decline? The Challenge of Global Populism” conference. The roundtable discussions were titled, “International Dimensions, Comparative Perspectives and Theoretical Approaches,” featuring a multitude of academics throughout the country discussing the variety of global political perspectives.

“[Global Populism] matters for us, as scholars like academics and professors, but also as citizens,” Kinderman said.