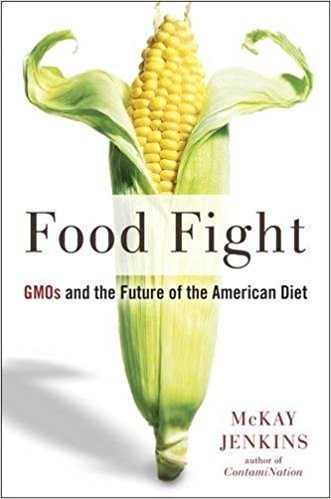 Environmental journalist and university English professor Mckay Jenkins recently published his new book: “Food Fight: GMOs and the Future of the American Diet.” The book aims to open a discussion about the recent development of genetically modified organisms, also known as GMOs, and teach average consumers how it affects their lives on an individual and societal level. This week, The Review sat down with Jenkins for a few questions that highlight the main points of his book and help students understand more about the food industry — an industry they play a part in every day.

Krista Webster: I’ve read that your book “Food Fight” mostly focuses on the controversy over GMOs. In your lifetime, how much have GMOs changed the way food is processed? Do you think GMOs have impacted culture?

McKay Jenkins: It’s in (your) lifetime, because GMOs have really only been around for 25 years. Before World War II, people either lived in the city or worked in a farm. But afterwards, large interstate highways were developed and Americans moved to the suburbs in mass waves. People still had to eat, so food production moved out to the West in huge expanses and was, and still is, constantly transported into the suburbs. What can those big farms grow? Corn, soybeans and wheat.

Nowadays, people can find around 40,000 types of food in every grocery store. But almost all of them are sourced from the three same crops: corn, soybeans and wheat. They say 30 percent of meals are eaten in a car nowadays. These meals are prefabricated, not made locally or organically. Technology was developing along the lines of mass food production for years before GMOs existed, but GMOs have just made it easier. Since the mid-1990s, something like 15 percent of corn and soybeans were GMOs. Now it’s increased to around 95 percent.

KW: Would you consider GMOs to be the biggest issue surrounding the food industry? How closely tied are GMOs with environmental problems such as climate change?

MJ: It’s really the food manufacturing system that causes environmental problems, and GMOs are just one tool in the whole process. The transportation of food and the creation of artificial fertilizers use the most fossil fuel and make the most direct negative impact on the environment. In fact, GMOs can actually remedy climate change. There are two types of GMOs: herbicide GMOs and insecticide GMOs. BT corn is an insecticide GMO corn type, so it reduces the need to spray insecticide. Some people say the net result is less pesticides, but in my studies I’ve found the opposite. Farmers just use more herbicides and reverse the positive effect.

KW: In your opinion, are companies with a reputation for being organic and healthy, such as Trader Joe’s and Whole Foods, honest to their consumers?

MJ: They are. But I’m also aware of the cynicism because they’re so expensive. They take advantage of consumers anxiety to be healthy and have less of an impact on the environment. Whole Foods has been important in making organic, healthy foods “mainstream.” Trader Joe’s doesn’t do as well with produce, but does better with making more organic processed foods.

KW: 17 countries in Europe have subscribed to a ban on the cultivation of GMOs. What is your opinion on this? Do you think the US should subscribe to a similar policy?

MJ: This is a much bigger question. The reason that Europe doesn’t have GMOs: Europe has kept the separation between farms and cities for thousands of years. Even small cities are surrounded by small farms. Each one of these small farms grows more specialized crops that are characteristic of their region. Europeans don’t eat as much corn and soybeans. They don’t want these giant companies coming in and ruining their traditional way of eating — the way they’ve been eating for hundreds, if not thousands of years.

Really, it’s a question of food culture. They don’t want their small farms bulldozed to have a 100,000 acres of corn.The U.S. now has nowhere to go to expand their agribusiness. Europe won’t let these huge companies in. So, they’ve moved to South America, where they’re currently taking down thousands of acres of rainforest to put in huge lots of corn. This has become a huge issue — the last thing the world needs is more corn and less rainforest.

MJ: College students have it a little tougher, because they have less money. If you’re a college student, you go to McDonald’s and buy a really cheap hamburger. It’s everything you don’t want: it’s bad for you, the economy, the environment…but it’s cheap. Whereas, Homegrown, which is locally sourced and employed by residents of Newark, is so much better. Sure, it may be more expensive, but the food wasn’t grown on a giant plot or slaughtered in a factory, and it was prepared minutes before consumption. My recommendation for anybody is to eat as locally and as nutritiously as possible.

Aramark, the company that supplies food to our dining halls, has a contract with the university so that it must use the food from Aramark instead of local produce. Unfortunately, this makes it harder for students to eat locally and gives them less choice.

KW: Recently, there has been an enormous increase in the amount of people who declare themselves “vegan.” In your opinion, is this a healthy lifestyle? Does it lessen the impact of climate change?

MJ: Yes. there is no question that meat contributes enormously to your carbon footprint. Especially beef — that takes an enormous amount of energy to produce. Meat consumption is not only an ethical issue, but also an issue of the environment. It takes something like 7 times the amount of corn to feed a cow than it does a human, so the caloric efficiency to create meat is much lower than that to grow just plants themselves. By not eating meat, it means your food takes a lot less energy to produce and is less impactful on the environment.

This Q&A has been edited for clarity and brevity.