Rooted on Main finds a new home in Newark 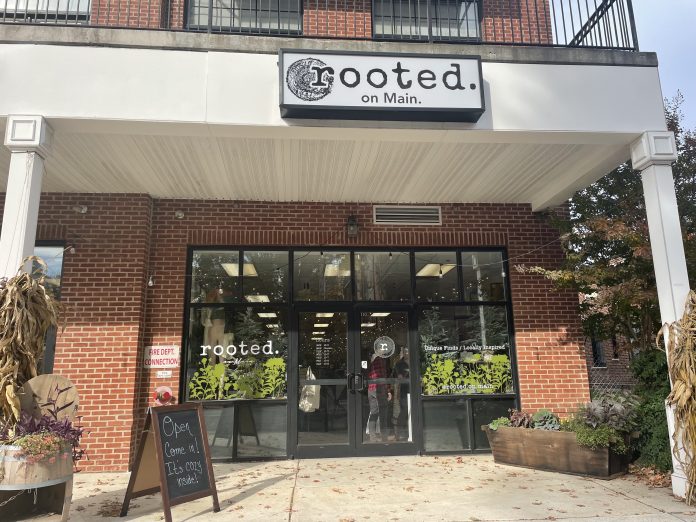 Gluten-free scone mix, hand-painted ornaments and delicate jewelry are just a few of the goods shoppers will find in Rooted on Main, a new small business and retail shop on Main Street.

“Come in! It’s cozy inside,” reads the chalkboard positioned outside the store that now occupies the space that used to house Heart and Home, a local gift and accessory store.

That is what Betsy Beehler, co-owner of Rooted on Main, wants customers to feel when walking into her store: comfortable and at home.

“We want them to come in and relax,” Beehler said. “To me going into a store … I just want to go braindead … I want it to be like that when you come in. It smells good, you’re warm and you can kind of just relax when you’re here.”

For Beehler, this sense of home is what brought her business to Newark in the first place. Seven years ago, Beehler and co-owner Ashley Rector opened up their first store — Rooted New London — in New London, Pennsylvania, the place Beehler calls home. This year, however, they expanded their business to Newark when the former location of Heart and Home became available.

“When [my] kids were little, this is where we’d come to go out to dinner, to go to the movies — we would come to Newark,” Beehler said. “It’s home to me, in a way, even though it’s not where I live. I just love it here.”

Another factor drawing Beehler and Rector to Newark was the fact that Beehler thinks little retail exists in the town. Beehler said that by bringing her business to Newark, she hoped she could benefit all the existing stores on Main Street as more retail options make it a destination for shopping.

Tom Coleman, city manager and board member of the Newark Partnership, a nonprofit with the goal of improving the business and community life of Newark, said the Partnership has been trying to diversify the Main Street community with businesses like Rooted on Main for years.

“It’s been an ongoing challenge, and frankly, over the last few years we’ve ended up moving more towards restaurants than what we’ve had before, which is disappointing,” Coleman said. “It’s a challenge not just in Newark, but [in] brick-and-mortar retail nationwide.”

In addition to the effects of e-commerce, Coleman said the factors driving retail businesses away from Main Street include the expensive first-floor rents and the fact that landlords are hesitant to get rid of costly commercial kitchens.

“That makes it hard to take a risky bet on a new business coming,” Coleman said. “I think with the number of students we have and the demand for food service, [restaurants] tend to be less risky.”

Mimi Sullivan, president of the Newark boutique Bloom, said that over the past few years cross-shopping — as in shoppers going from store to store — on Main Street has been less frequent because of the low amount of retail. For her, Rooted on Main comes as an exciting addition to the community of businesses on Main Street.

The “local flavor” of Rooted on Main shines through with its emphasis on merchandising from local artists.

When Beehler and Rector first established their location in New London, they went to local artists and makers because they wanted to open in time for the holiday season and needed to get merchandise into the store quickly.

That decision to focus on local artists, however, soon became part of their business plan as they received positive feedback from their customers.

Beehler said that on any given day she will not know exactly what products will come to the store, since the artists that they work with send them their latest creations. Beehler and Rector constantly have to make decisions about which of the products they receive, like the wooden vases made by a retired engineer and the custom pillow with the area code “302” on it, will stay and which will go back to the artist.

Though they do receive some merchandise from small batch companies, which are primarily domestic, women-owned and philanthropic in some respect, the focus of their business remains on empowering local artists, from young mothers attempting to supplement the incomes of their families to retired individuals trying to fill their free time.

“It’s about selling stuff, but it’s also about building something,” Beehler said. “Building a feeling, a community.”