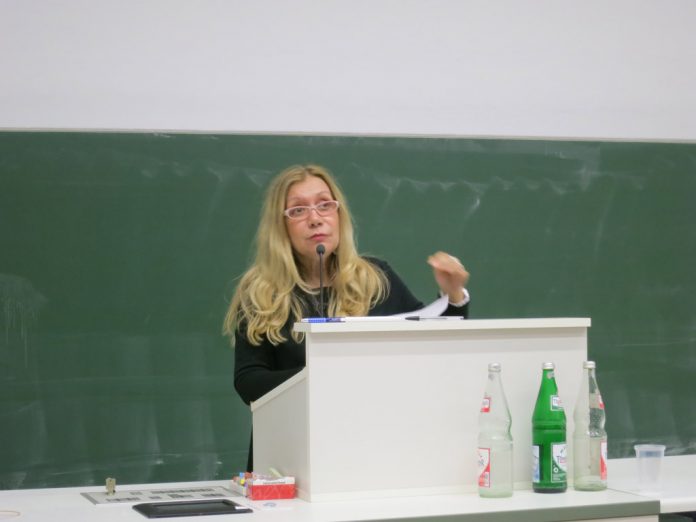 Gladys Ilarregui, associate professor in the Department of Languages, Literatures and Cultures, often writes poetry about social issues that she wants to address. However, with her latest poetry book, “Manifiesto de ruinas y destellos,” she decided to explore personal topics about relationships, love and growth. The poetry book, which will be published in Oct. 2021, recently won the Carmen Conde Women’s Poetry Award in competition with 238 other poetry books.

Ilarregui’s courses at the university mainly focus on colonial Latin America and Latin American studies, which are her specializations, but she does interdisciplinary classes as well, covering topics such as human rights, Latin American literatures and economic inequalities in Latin American poetry and fiction. Aside from her position at the university, Ilarregui also does research with a group called Hemispheric Dialogues: Social Justice in the Americas, which focuses on having professors in academia engage in conversations about social justice.

One of her biggest interests is creative writing, specifically poetry. While Ilarregui expressed that the combination of writing academically for research and creatively for her poetry publications is demanding, she finds time to explore both. When writing, Ilarregui takes diction especially seriously. Using the right words to express what she means in a given moment is essential to her.

“You have a few words,” Ilarregui said. “And in those few words, you have to convey that idea, that feeling, that particular moment of the word.”

She has written many books of poetry in which she explores and addresses various social and political issues, such as violence in Mexico. However, for her most recent work, she took a different direction.

“I think that poetry could be a wonderful thing to look at the human condition and to address political, social issues of the present,” Ilarregui said. “But in this particular work … I just wanted to do a different exploration of the imagination.”

More specifically, “Manifiesto de ruinas y destellos” illustrates the beauty and necessity of friendship and interpersonal relationships. Ilarregui has found that her friends have helped her to grow and have become such a significant part of her life, so she decided to dedicate her book to them. The title also demonstrates another main theme of the book, which is that imperfections can be a beautiful, human thing.

“Life sometimes brings you things that are not perfect or beautiful,” Ilarregui said. “And it’s interesting to address those issues because you’re only human … that’s why it’s called ‘manifiesto of ruinas,’ ‘manifesto of ruins and sparks,’ because every time that you feel a pain or you feel you’re in the middle of a situation that is not that fantastic for you, still you have so many things to learn.”

Ilarregui also comments on social media in her poetry book. To her, social media says that “you have to have the perfect life.” However, Ilarregui said that the pressure to be perfect and succeed is not beneficial to students in modern times.

“Students today have so many messages of how you have to succeed, when you have to know that not always you’re going to succeed, but that is part of the human experience,” Ilarregui said.

The Carmen Conde Women’s Poetry award is a Spanish literary prize that is awarded to female authors in order to celebrate their works. The award is organized by the publishing company Ediciones Torremozas, and the only criteria for the award is that the work must be written in Spanish and have a female author. The award is named after Carmen Conde Abellán, the first female author to be named an academic numerary of the Royal Spanish Academy. Although Ilarregui has won many poetry awards in the past, including the Arthur P. Whithaker Prize for best book of poems and the Premio Plural award for first prize in poetry, this most recent award does not feel any less gratifying.

“The validation of other people makes it real, because you never know,” Ilarregui said. “I am surrounded by words all the time, I’m working all the time, but I never know what is going to be the outcome … it’s very nice when someone tells you ‘Oh, I read this and I like it.’”

Ilarregui expresses that after this work, she plans to write more about any one of the “extraordinary topics of our time,” such as climate change. Her message to artists of today is to follow their hearts and resist the culture of constantly going fast and pushing yourself.

“Whoever has to create will create. Doesn’t matter where or when, against all odds,” Ilarregui said.